Shifting under a colonial past

A Myanmarese shifting cultivation technique, once perverted by British colonisers to maximise teak exploitation, is still valued for its benefits

Shifting under a colonial past 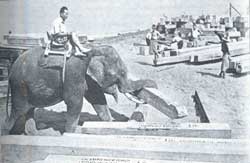 COLONIAL logic has often found it convenient to adopt and adapt "native" logic, and later drop it to suit its changing needs. Taungya is the name of a forestry game the British played in erstwhile Burma.

The taungya system was first practiced here in the mid-19th century. Taung is "hill" in Myanmarese, and Ya means "cultivation". Colonial forest officials developed this system to restore forests with commercially valuable trees. For human-power, they yoked in the ethnic populace which practiced shifting cultivation, and which was coaxed, cajoled and coerced into becoming landless labourers serving British commercial interests in their own hills.

The advent of taungya was inextricably linked to the political and economic objectives of the British in Myanmar. For the British, teak, the then most valuable commercial timber in the world, was as essential as it was difficult to procure. By the beginning of the 19th century, the British had virtually laid bare the Indian supplies from the Malabar hills. One of the Empire's principal reasonings behind conquering Myanmar was, thus, accessing its extensive teak forests. The British fought 3 wars to colonise Myanmar, the first between 1824 and 1826; then in 1852; and, finally, in 1885 Britain held complete sway over the country.

As a concept, Taungya was developed to suit British interests of the period between the mid-19th century and the early part of the 20th. They adapted a form of shifting culture practiced by the local itinerant hill people.

In Myanmar, the British first encountered these shifting cultivators in the Tenasserim. Mostly from Karen ethnic origin, they depended upon agriculture in the teak forests. These cultivators made annual clearances in the forests, in which they planted food and cotton crops. To avoid depleting the soil, the Karen operated a rotational system in which the fields were left fallow for 10 to 15 years.

However, this system of indigenous forest land management clashed with the imperial concerns of promoting commercial forestry in the new colony. From the 1830s, colonial officials started cribbing about these "primitive" and "wasteful" practices. These complaints intensified after 1852, when the British acquired control over additional teak forests in the Myanmarese province of Pegu. Not surprisingly, therefore, one of the main goals of the colonial forest department, established here in 1856, was to sort out this "problem".

The British first sought to persuade shifting cultivators to leave the hill-forests for the plains below, which at that time were being cleared for permanent paddy cultivation. However, as British forester William Seaton noted in 1863, the Karen refused to give up their traditional way of life. It was a delicate situation. Pegu had just been conquered by the British but resistance in some rural areas was still strong. Officials ruled out coercing these people into the plains.

The other option was carrot-dangling. Foresters attempted to win over the Karen to participate in forestry work. In 1856, British Myanmar's chief forester, Dietrich Brandis (who later became the first inspector general of forests in India), successfully conducted some trials. Based on this, he ordered his officials to persuade the Karen to plant teak in their hill clearings.

The idea was to make the shifting cultivators intercrop teak seedlings supplied by the forest department with their own field crops. The eventual rotational abandoning of the land by the Karen would let a teak forest grow up in the area. Thus was conceived the diabolic taungya system. Colonial foresters sought to convert the independent Karen agriculturists into labourers assisting them in turning Myanmar's ecologically-diverse tropical forests into monocultural teak plantations.

But the Karen were not impressed. Imperial foresters reported that the Karen were well aware that this system would eventually lead to the end of their traditional way of life. It was simple logic: it takes between 100 to 150 years for a teak forest to reach commercial maturity, far beyond the Karen's operational agricultural cycle of 10 to 15 years.

Since the Karen would not be allowed to return to an area until the teak had been harvested, taungya would mean gradual but unalterable vanishing of the total area available for the itinerant lifestyle of these shifting cultivators. They would be left at the mercy of the forest department.

Naturally, the Karen at first resisted all attempts to implement the taungya system. Some migrated from British Myanmar: in the mid-1860s, Karen groups were reported fleeing east to Siam, or north to monarchical Myanmar. Some others stuck to their traditional practices in the teak forests, but after eliminating all evidence that teak had ever grown in their clearings. Forest officials meted out heavy punitive fines to anyone found to have destroyed teak (a state-owned tree since pre-colonial days). But most often, the local people refused to cooperate with officials trying to investigate cases of suspected teak destruction.

By the beginning of the 1870s, the carrot was supplemented with the stick. British foresters used coercion (taxes, fines) as well as incentives (payment for planting works, or allocation of separate land for the Karen) to persuade the first cultivators to participate in the taungya system. Promised land exclusively for their personal use, a Karen village in the Tharrawaddy district first agreed to plant teak in 1869. Other villages soon followed suit, and by the 1880s the taungya system was being adopted in much of British Myanmar. From a total planted area of only 425.25 ha in 1876, commercial timber plantation under taungya had exceeded 4,050 ha 10 years later. By 1906, it had crossed 28,350 ha.

It was estimated that in 1900, these plantations would ultimately yield an annual timber supply of 30,000 tons and an annual income comparable with the total cost of development till that time. Understandably, many imperial foresters in late 19th century Myanmar regarded the taungya system as a great success. As Berthold Ribbentrop (who became India's inspector general of forests after initial training in Myanmar) remarked, it enabled the British to transform the Karen "from an antagonistic nuisance to forest conservancy into the most loyal servants of the Department".

But scepticism soon set in. Early in the 20th century, most colonial foresters in Myanmar began having their doubts. And altered political and economical circumstances of the early 20th century in colonial Myanmar forced taungya out of circulation by the 1930s.

The system had originally been developed at a time when British access to teak was essential, but tenuous. The British had acquired the Pegu teak forests after the 1852 war. But Myanmar's most valuable teak forests were located in the monarchy-controlled territory just north of the border. Exports from there to British territories were erratic and vulnerable. Political turmoil often cut supply lines. In those circumstances, intensive teak regeneration through taungya made much sense.

However, the 3rd Burmese War in 1885 gave the Empire access to central and northern Myanmar. It now made greater sense to adopt less intensive (and costly) silviculture methods across a wider area. Attention turned towards natural regeneration.

It was a pest which finally helped devastate the self-serving logic of the imperial foresters. Some British foresters questioned the wisdom of monoculture timber plantations. Such plantations, they alleged, were more susceptible to disease and pests.

As if in confirmation, evidence of widespread damage in teak plantations caused by a moth known as the beehole borer came in early this century. Was the pest being parented by teak plantations? It was a bitter debate. Some argued that it was the incidence of rainfall, not teak, that held the key to understanding the spread of this pest. Doubts on this score persisted and the debate continued. Finally, a severe financial crunch forced senior colonial officials to terminate the reforestation programme in 1935. Although a few small plantations were created thereafter, the British empire's first reforestation scheme had by then died in Myanmar's thick jungles. By then, too, the British foresters cared tuppence about the Karen, who had abandoned their original agricultural lifestyle and had adjusted to the colonial reforestation programme which gave them their daily bread.

Interestingly, despite its early demise in Myanmar, the taungya system kept regenerating itself elsewhere. Colonial foresters sought to apply the system in India, Kenya, Nigeria, Indonesia and Thailand, among other places. Subsequently, the taungya system has continued to be regarded as a well-used reforestation technique in the Third World. Yet, the system is still bedeviled by political and ecological problems similar to the ones first experienced in colonial Myanmar.

But if the Myanmarese experience has illustrated anything, it is surely that there are no easy solutions to forest management problems in the Third World.

---Raymond L Bryant teaches in the department of geography in King's College, London, University of London.