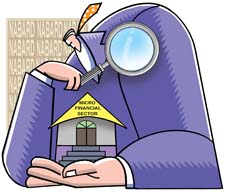 The Micro Financial Sector (Development & Regulations) Bill 2007 has been under the scanner of late. The bill proposes to make the National Bank for Agriculture and Rural Development (nabard) the regulator of micro-finance sector in the country. Until now, the Reserve Bank of India has been regulating financial organisations involved in collection of public deposits.

The proposal, however, has sparked a debate. While a section feels that it will bring about legitimacy in the system, others say the move is not appropriate because nabard does not have experience in the regulatory field . The government, however, maintains that the move is necessary to give the sector a much-needed boost.

"The micro-finance bill will address ambiguity in the collection of savings to ensure depositors' protection," says Amitabh Verma, joint secretary, Union ministry of finance.Adds V Satyamurti, ceo of All India Association for Micro Enterprise Development: "There are micro-finance institutions (mfis) which operate without clarity on regulations relating to moneylending, non-banking finance activities and income tax. The bill will help such organisations."

According to the bill, all societies, trusts and mfis, but not self-help groups, need to register with nabard before beginning operations. nabard will frame penalties for violation of norms. Verma says those who violate norms will be punished heavily The bill stipulates Rs 5 lakh as the minimum corpus before an entity starts mobilising deposits. Some groups feel that a low minimum capital requirement may bring in players who will venture into micro-finance by accepting deposits from the poor.

The bill does not propose any cap on interest rate, which the National Association of Community Development Finance Institutions (sa-dhan) is in favour of. "For us, the issue is not about interest rate, it is about a range of financial services made available for the poorest and low-income households," says Mathew Titus, executive director, sa-dhan, founded by leading mfis like Sewa Bank, Basix and Pradan.

Smita Premchander, general secretary of Sampark, a Karnataka-based ngo, however, says the bill does not address the problems faced by rural cooperative credit institutions or rural banks, which were created for disbursing credit to the poor and marginalised. Cooperatives also oppose the bill. "Amendment of the Cooperatives Societies Act is still due. The move to bring about the micro-finance bill is not justified," says Rama Reddy, president of Hyderabad-based Cooperative Development Foundation.

The ministry of finance estimates that about 2.3 million shgs practise a bank- mfi-shg linkage model and about Rs 12,500 crore worth of credit has been disbursed. This aside, another 2.3 million shgs are covered under the Swarna Jayanti Rozgar programme, with Rs 7,500 crore in credit already given. nabard data shows that more than 1.6 million shgs have received loans of more than Rs 6,00 crore from commercial banks and the average loan amount per beneficiary works out to be around Rs 2,000, which is too small to enable poor families to fight poverty. Besides, sources in the banking industry say the total demand for microcredit in India is estimated to be close to Rs 200,000 crore."Microcredit in its present form is not in a position to address the livelihood issues of poor," says Vijay Mahajan, managing director of Basix.

There is need to expand the paradigm from microcredit to 'livelihood finance' by extending services such as savings, insurance cover, nutrition, health, education and vocational training, experts say.