By allowing high-rises around an advanced weather radar in Mumbai, IMD sets a bad example for the rest of the country 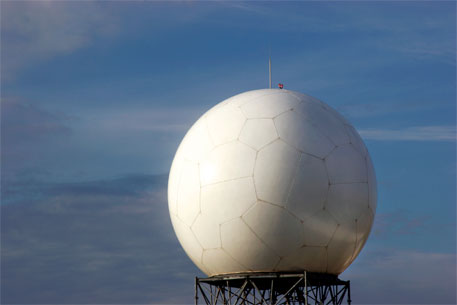 July 26, 2005, was a watershed in the history of Mumbai. The city received an unprecedented rainfall of 944 mm in just 24 hours, leading to flash floods and massive loss of lives and property. In the wake of the city’s worst-ever floods, the Maharashtra government decided to install a Doppler Weather Radar (DWR) in Mumbai for advanced weather forecasting. After some technical and administrative glitches, the radar finally became functional towards the end of 2011. It was installed on top of the 18-storey Archana building in Navy Nagar area in south Mumbai, informs an official of the India Meteorological Department (IMD) on the condition of anonymity. The building already had IMD’s conventional radar installed.

For its proper functioning the Doppler radar requires the area around it to be free of tall structures. Now, in a major setback to the state-of-the-art DWR, IMD, under pressure from real estate developers, has decided to do away with the restrictions on construction of high-rises around the radar. Two years ago, the Municipal Corporation of Greater Mumbai (MCGM) had made it mandatory for any high-rise project greater than the height of the Doppler radar (68 metres) to have IMD’s mandatory no-objection certificate (NoC) before work could be started.

Last year, a group of private developers moved the high court against the controversial NoC clause, which they claimed had stalled crucial development projects in the metropolis. For accurate data gathering, the area of 10 km radius around the radar should not have high-rises. Builders informed the court that such a condition was regressive in a land-locked city like Mumbai. The court directed both IMD and the petitioners to work out a solution, saying, “A balance needs to be struck between the need for development and having a Doppler radar.” On July 14 this year, IMD informed the Bombay High Court that project developers will no longer have to seek the department’s NoC before applying to the civic body for clearance of tall buildings. 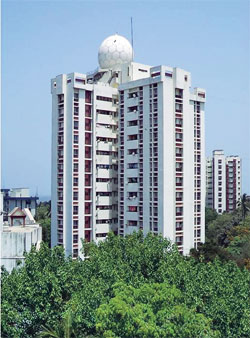 “Yes, we have informed the court that IMD’sNoC is no longer required. Tall structures can come up around the Doppler radar in Mumbai,” Sunil G Kamble, director, Regional Meteorological Centre, Mumbai, informed Down To Earth, refusing to comment further on the contentious issue.

Till 2011, Mumbai had conventional radar, which could only study the height and distance of the cloud. Its black and white polar diagrams had to be manually plotted by a forecaster and then faxed to the authorities concerned. The Doppler radar functions 24x7 and gives fresh 3D coloured images every 10 minutes, which are available on IMD’s website. It can predict a weather event, such as the 2005 floods, six hours in advance, giving enough time to warn and evacuate people(see ‘How DWR works’).

G Pandithurai, a scientist with the Pune-based Indian Institute of Tropical Meteorology, explains that DWR emits beams to collect weather data and requires at least a 10 km radius free of tall structures. “Otherwise it cannot see atmospheric targets, such as clouds, and instead receives reflection from the high-rises,” he says.

IMD’s mandatory NoC had affected several high-rise projects in the past two years. In December 2013, Redstone Group dragged the state government, MCGM and IMD to the Bombay High Court demanding shifting of the Doppler radar, which had stalled the company’s under-construction high-rise in Mazgaon. The Maharashtra Chamber of Housing Industry (MCHI-CREDAI), too, intervened in the matter.

When IMD informed that it was not feasible to shift the radar from Navy Nagar, the petitioners pressed for a second DWR to complement the functioning of Colaba’s Doppler radar. “Let IMD install another radar at a suitable location to get more accurate data and do away with the mandatory NoC,” recommends Hussain. According to sources at IMD, the department and the state government plan to install another Doppler radar in Raigad district, 40-50 km from Mumbai.

Pandithurai offers another solution. “Rather than a Doppler radar, IMD can install X-band radar, which is smaller in size and convenient to set up. It can also be shifted, if need be.” As against DWR, which has a range of 500 km, the X-band radar has a range of only 50 km.

Bad precedent for other states

In order to accommodate high-rises in Mumbai, the Union Ministry of Earth Sciences— IMD comes under its jurisdiction — recently tweaked its guidelines and clarified to the Bombay High Court that these rules “now onwards need not become a hindrance to the compelling development needs of mega cities like Mumbai”.

This change of stance is going to have wide implications as dissent against Doppler radars is simmering in other Indian cities as well. Chennai’s DWR was installed in 2002 on top of the Port Trust Centenary building in George Town at a height of 53 metres above the ground. In 2008, the then state chief secretary, L K Tripathy, told IMD to shift the Doppler radar outside the city limits so that high-rises could come up. The radar remains in place. Both the Chennai Metropolitan Development Authority (CMDA) and the regional IMD office are tight-lipped on the issue. On being contacted, N Usha, senior planner with CMDA and in-charge of DWR, retorted: “Come to Chennai to meet our member secretary, else no information will be shared.”

At present, IMD has a network of 15 functional DWRs across India. One Doppler radar costs between Rs 10 crore and Rs 20 crore, excluding the daily functioning and maintenance cost. Installing these radars and not controlling high-rises in their vicinity may negate the reason for their existence, which is accurate weather forecasting.

The stage is almost set for skyscrapers to mushroom around Mumbai’s Doppler radar, which may eventually be reduced to a white elephant.