Glaciers retreat. Forests become denuded. Buildings come up where green meadows used to be. And across the Kashmir valley, the natural mountain springs die out 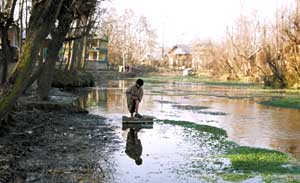 Verinag, Kukarnag, Sukhnag. For centuries, natural springs have crisscrossed the valley, providing clear mountain water. Some, like Malakhnag and Kokernag, are renowned for their healing properties. Anantnag (literally, 'endless springs') and Srinagar districts have a preponderance of them. Sadly, most of the springs are now drying up.

Ghulam Jeelani of Kashmir University's geology department finds "a one third decline in pre-1998 levels of Jhelum in Anantnag, where it is primarily fed by springs rather than the surface water of the river basin". Anantnag has often been in the news for reasons other than ecology. But the springs that survived the bullets and bomb blasts are now being killed by neglect. Reasons vary: from residential sewage to shops dumping wastes to construction around the springs. Patterns of usage have altered not only in Anantnag but elsewhere in the countryside in recent years, and the springs have had the worst of it.

With spring water getting polluted, people have turned to phe ( department of Primary Health Engineering) supply. Ironically, the water supplied by phe on tap or through tanks in urban and semi-urban areas is also sourced from spring water. In rural areas, villagers have dug kols or surface canals to channelise water from the rivers for their use. At some places, the state irrigation department has constructed tanks from where water is carried through pipes to the fields.

The decline is not confined to springs. Wetlands, rivers and lakes also show a decrease in water levels. Haneefa Banoo, a scientist with the Department of Remote Sensing and Environment (drse), Srinagar, has used satellite imagery to prepare the first classified directory of lakes and water bodies in Kashmir and is working on an updated version. She says, "In 1998, we spotted 500 lakes and water bodies in the Valley. The number must have decreased in the past four years."

But why are the springs dying now? B L Malla (Water Resources and their Management in Kashmir) puts it down to the rampant deforestation that has "disturbed the ecological balance and lessened the average snowfall".

D Chandrasekharam, professor, Department of Earth Sciences, Indian Institute of Technology, Bombay, explains, "Drying of springs can happen when channels feeding springs are blocked or when the source(s) feeding the springs disappears. Sources dry up when glaciers retreat (with increase in surface temperature over a period of time) due to global warming . Such phenomena is being observed in the case of the Gangotri glacier, which is retreating at the rate of about 28 metres per year. On a global scale, Kargil and Gangotri are not very far and a similar situation must prevail over the entire Himalaya. Blocking of feeding channels can occur due to tectonic activity. As the Himalaya lie over converging plate boundary, such activity is bound to occur."

Developments under the geological crust may be causing springs to dry up at source, but the pollution overhead has exacerbated things. At one time, the Kashmiri people used to revere their springs. But now most of them have abandoned the symbiotic relationship. "Earlier, it was believed that tasrufdars (elves inside the spring) were enraged if someone polluted the spring", says Ali Mohammed, a villager living near the Hatbalnag. But now that kind of fear no longer exists, and with it, the indigenous defence mechanism has gone too.

These beliefs (even hydraulic phenomena of spring water being warm in winters and cold in summers was seen as a miracle) were part of the Kashmiri ethos, which strengthened the harmony between the people and their environment. Hatbalnag, in the heels of Pirpanjal in south Kashmir, is reflective of the new apathy. Revenue records (1965) show Hatbalnag spread over 5440 square feet (sq ft). Now it has shrunk to 90.7 sq ft and the water level has come down. Showket Ahmad, a local shopkeeper says, "Houses were built after filling in the vast spring bed." In the little hamlet of Hablishi, the water of the Khalnagin spring was enough until two years ago. "Water from our Khalnagin was accessible and safe too," says Sara. But in 2002, the villagers decided to construct a school. With limited common land, the area around Khalnagin was chosen for construction. A pipe was laid beneath the building to let the water flow. Within a year, the flow of water came down drastically. "It was nave to cover the spring and the major portion of its basin with cement and then expect the spring to survive," says Sara's husband, Gul Mohammed. The water now smells bad. "This is the water we've used all our lives. Now we cannot even look at it because of the shill (algae) in it. At times, we even find dead frogs and worms in the water," says Sara. Sara and Gul are nostalgic for the once calm waters of Khalnagin, believed to have curative powers.

Village elders explain this parting from the traditional source in disquieting terms. "Twenty years back, there was no chemist's shop in the village. Nobody was sick. Today there are four chemists' shops in this small village of 250 households," divulges Ashir Parray, the headman of Hablishi village.


Stories like this pour in from every part of south Kashmir. Whenever there was a need to construct something for the community, from a school to a mosque, it was the no-man's land at the spring's edge that was targeted. The political situation has done its bit as well. Malakhnag in Anantnag was cherished for its mineral-rich waters. But the gutting of the village in 1990 in the crossfire of a clash between militants and security forces was the end of the spring as well. When the houses were re-built, the channel of the spring (that passed through the main settlement) was heavily encroached upon from both sides. Soon, it became narrow and now Malakhnag has become so dirty that not even stray visitors come by. The official reaction is one of indifference. M A Itoo, district officer, Pollution Control Board (pcb) Anantnag, admits that there was a proposal for a special team that would safeguard water bodies like springs. "But it did not take off because the officials were unresponsive."

While the authorities are blas, the people seem to be active participants in the erosion. Even where they have tried to save the springs, the methods used haven't been the most appropriate. Some villages have raised walls around springs. But the embankments prevent water birds like ducks from entering the spring basin. "They eat hydrophytes, swim in the water and uproot the pollutants, which then flow away," says botanist Rohit Baldev. Hydrophytes like algae, water silk, duckweed or limna are useful in indicating pollution in a water body. The algae bloom retains pollutants. "Greater porosity is the sign of a healthy spring. But over time, the layers of pollutants sediment and this affects the porosity of the rock," says Jeelani.


Hundreds of tiny springs once dotted the base of the Martand plateau. Most of them have dried up in the last 15 years. Some people link this to the exodus of the Pandit community, who treated the springs as sacred objects. "This period coincides with the absence of Pandits from the valley. They used to clean and worship them," says Zamir Ahmad of Mattan. "Earlier, nobody was allowed to drink water at the source or wash clothes there. Today people do all such things and nobody bothers," says Suhail Ahmad of Lookbawan.

Where are the spring fishes?

Many villagers also connect the dying of springs with disappearance of fish from them. The spring fish were a protected species. "You can see them but not eat them", used to be a local adage. Till 1991, Hatbalnag was rich with fish. Today, while villagers here acknowledge that the fish have gone, they don't believe the reason might be the use of fertilisers and pesticides by farms in and around the area.

Fish also act as bio-indicators to monitor water pollution. "The exposure of fish to certain pollutants has a direct effect on their nervous system, which modifies their social and sexual behaviour, " says Rafiq Ahmad, inspector in the state fisheries department.

Industrial activity has also helped to destroy the springs. In Bumthan, a village on the national highway, the spring was the sole source of drinking water. Last year, a brick-kiln factory was established adjacent to the spring. Thick layers of dust kept accumulating at the surface of the spring and the water is now unfit for drinking. Ashiq Hussain, the local doctor, blames it on the connivance of pcb authorities that routinely issue "No Objection Certificates" allowing the setting up of hazardous units.


Scarce snowfall in the winter can lead to a famine-like situation and the declining water flow from springs is causing recurring droughts in Kashmir, once unheard of in this region. With the springs dying, the agro-economic picture of the valley is changing. Rice, the chief crop in Kashmir, is giving way to poplar, apple and kikkar, which require less water. Farmers in Nowpora are opting for kikkar nurseries. "Last year the paddy yield in this field came down by one third of the previous year. The only option was to switch over", says Sabzar Ahmad of Nowpora, a farmer who recently brought his land under kikkar cultivation.

"If all this is not controlled at this stage, the economy will be shattered, says B L Malla about the decline in springs. "The dream of industrialisation which we people also see in Kashmir will come to a stop, as most industries are dependent on electricity, which is produced by hydel projects in the valley. It will not be wrong to say that the economic progress of the place is largely dependent on water and its proper management.