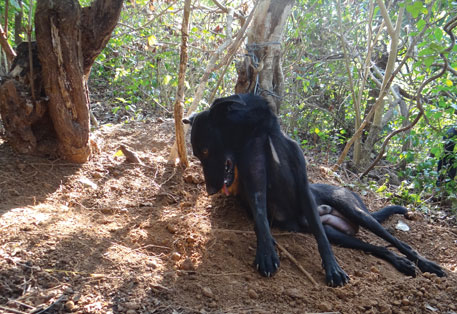 The dog was howling again. The plaintive sound was really getting to Alethea Lobo. She had initially ascribed it to some hound’s mating blues, and ignored it. After hearing it three nights in succession, though, she had begun to think it might be something else. It seemed to be coming from exactly the same location all the time, somewhere in the middle of the thick vegetation on a hill slope close to the village of Pilerne in Goa where Lobo lived. Perhaps some heartless soul had tied a dog and left it there, she thought.

In the morning, with her landlord to help her, she explored the area. It was tough going, given the denseness of the undergrowth, and took a long while. What they eventually found shocked her, but also made her thankful.

In the middle of the thicket, not very far from a junction of two roads, they found not one but two dogs. They had not been left there—they had been caught in snares set up in the bushes. Their condition was pitiful—one of them had been snared by the neck and was hanging half off the ground, while the other had the snare wire biting through its shoulder, back and stomach. Both dogs were bleeding, exhausted and almost crazed with fear and desperation. “It was horrible,” says Lobo. “Just the thought that they had been in that condition for days made me feel terrible.” 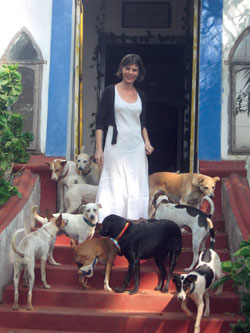 She called the International Animal Rescue (IAR), a local animal welfare organisation, whose functionaries came and cut through the wires very carefully, and transported the two dogs to their shelter in nearby Assagaon. The injuries to the dog that had been trapped by the neck were too severe, and it had to be put down. Vets at IAR treated the other dog, which is now recuperating.

IAR also brought into the picture Fionna Prins, who lives not far from where Lobo does. A management consultant of Dutch origin who has made Goa her home, Prins has quite a reputation as “the dog lady”. The beautiful Portuguese-era house in which she lives is always teeming with canine inhabitants—a few semi-permanent ones and many temporary inmates that she is looking after for IAR or is in the process of rehoming in Goa, other parts of India or even Holland and the UK.

“Initially, we were looked upon with some suspicion—‘what do these foreigners want in this out-of-the-way place?’—but that’s something you will find anywhere in the world,” she says. “When we first moved here, I found that Pilerne had a high incidence of rabies, and dogs would always be fighting. I started treating the local dogs, vaccinating them, having them sterilised, and the situation with strays got a lot better. Now we are tolerated here,” adds Prins.

One of the reasons Prins had been alerted by IAR about the trapped dogs was that she has in the past been instrumental in bringing other such incidents to the knowledge of animal welfare organisations and wildlife bodies. In the course of long walks with her dogs through the woods and over the hills that surround Pilerne, she periodically comes across evidence of small-scale poaching. “One of my own dogs once walked into such a snare,” she says. “Luckily, I was with her, and could get her out before any damage was done. The traps are laid for wildlife, of course, but strays and even pets that roam free end up as collateral damage.” 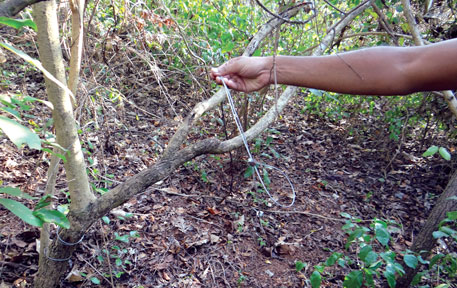 After the first incident with her dog, she actively started looking around for the snares, and “found 20 or so over the course of a week”. She has also happened upon what she believes is evidence of poaching of snakes and other creatures. “I have often come across holes dug up, presumably where snakes had lived, and even snake skins with the flesh stripped from them. On another occasion, I came across dozens of peacock feathers in one place. Peacocks shed feathers naturally, I know, but not so many all at one go. This had to have been done by humans, and they must have killed the peacock to do it.”

While poaching is an acknowledged problem in India’s wildlife scenario, what makes the situation different in Goa is the geography of the state. Villages and small towns often exist shoulder to shoulder with dense forests. Pilerne is a good example, with “waddos” or wards strewn about within a patchwork of agricultural land, thick jungle and grassy or rocky wilderness. The place where the dogs were found snared is itself within stone’s throw of the village houses of Volwaddo and a few hundred metres from more recent developments like apartment complexes further up on the Porvorim plateau. 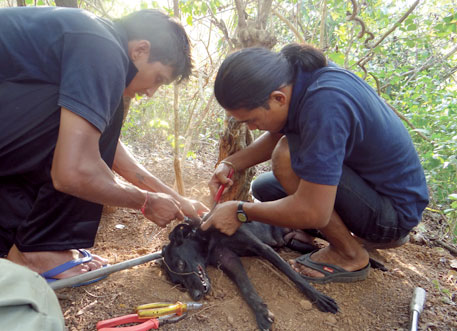 Despite their proximity to human habitation, the jungles and grassy hillocks are home to many varieties of wildlife, much of it coveted by the poachers. Prins talks of “wild boar, porcupines, peacocks, civet cats, hares”, most of which illegally find their way onto the tables of unscrupulous restaurants. The trade is, of course, covert— one has to know the right people to be able to order these items. “But it is kind of an open secret,” avers Prins. “I know people who come in from Delhi and other places looking for an ‘exotic’ experience in Goa, and they find their way to these restaurants quite easily.”

Wild boar meat, for example, is one of those much sought-after exotic delicacies. H..., a forest official, who wished to remain unnamed, suggests that though the violators are well-known, political patronage prevents action from being taken. But his view of the illegal meat trade is different from Prins’. “The majority of consumers are Goans,” he says, “and the meat gets served in the small places where no tourists go. How it works: if a poacher finds a boar in his snare, he won’t kill it right away. He will first go and find a buyer—owner of a restaurant, let’s say. He will take the buyer out to see the trapped animal, and they will agree on a price. Only then will the animal be killed, and the buyer will transport it to his establishment.” 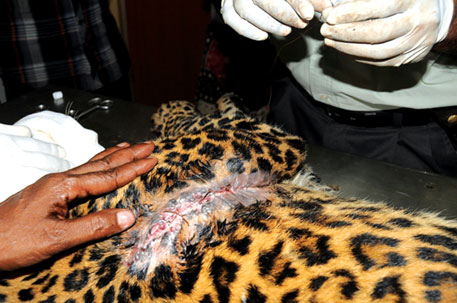 Animals are referred to by code names, H... reveals. “Wild boar is often called Pedru in south Goa and Kallo in north Goa. So when the poacher has a catch, he will call the potential customer and tell him, ‘Pedru has come’.” Without adequate knowledge, anyone listening in will have no clue that an illegal deal is in the making.

H... is looked on by environmental activists in Goa as perhaps the only one who will stand up for the right side in a fight. He has, of course, felt the brunt of this: “My superiors sometimes ask me what I am doing in the department; they tell me I should have been in an NGO.” But he has taken on powerful forces when it had to be done. Of course, no good deed goes unpunished, so H... has been at the receiving end of reprimands and worse. Cases of assault and attempted murder have been filed against him by timber smugglers, poachers and other assorted bottom dwellers. 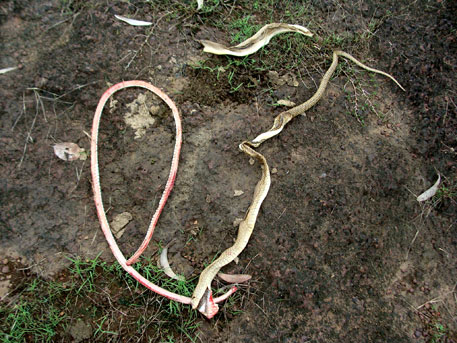 H... met Fionna Prins of his own accord about the snares, even though this patch is outside his jurisdiction. “A friend brought this incident to my notice,” he says. “As I live close by, I went to find out more about it. I wanted to have a look at the snares.”

The nature of the snares—scooter or motorcycle clutch wire coiled and looped through a small nut, and tied at the other end to a tree—led H... to believe that it was not the work of a local poacher. “These are more sophisticated; the work is more professional,” he says.

His knowledge of snares led him to believe that tribals from Jharkhand might be involved. Along with a colleague, he visited a few camps of labourers around the area, and took a few statements. “More in the nature of a deterrent,” he explains.

H... also offers an interesting take on the use of snares. “These are silent killers,” he says. “Where a gunshot would attract attention, these do their work quietly. Also, these days, with the elections coming up, the police have confiscated most weapons. So the use of snares increases.”

These particular snares, H... thinks, were set up to catch feral pigs. Many restaurants serve the meat of these creatures in the guise of wild boar. Customers are often not discerning enough to be able to tell that what they are eating are animals that live off garbage and human excreta.

For the poacher, the return on investment on this enterprise is better than on any gilt-edged stock. “A snare like this one—which requires a small length of scooter clutch wire, and a nut-bolt—costs about hundred rupees,” H... says. “Feral pig meat, on the other hand, can go for Rs 300 a kg. And a good-sized feral pig might be about 60 kg, with three-fourths of that being productive meat. So, for hundred rupees, the persons who set this trap can get back more than 100 times that amount.”

Similar windfalls await those whose handiwork Prins has spotted further up in the Pilerne hills. Those, H... agrees, are more likely the work of local poachers. And given the gains they stand to make, they are more aggressive on this, their home territory. Prins has had veiled threats passed to her via her domestic staff. When she first started removing the snares she found on the hills, she was told by a member of her staff that “villagers are angry, they know who is removing the snares. She better be careful.” It did not deter her.

“This may seem like a small problem in the larger scheme of things,” she admits, “but people who do this are not only doing this. It is not as if they are not seeing the animal suffering. And animal cruelty has been strongly linked to other forms of psychopathic behaviour. The people who set these snares probably also beat their wives and are aggressive towards other people.”

H... agrees that it is not a crime that should be ignored. In other contexts, he has seen leopards, even a well-publicised tiger, caught in snares set for other animals. In the Pilerne case, the collateral damage was to smaller animals, but “cruelty inflicted on domestic animals is as much worthy of concern,” he says. “Besides, traps like this can even be a danger to humans. A kid who walks into one of these can suffer serious injuries.”

Aniruddha Sen Gupta is a writer, designer and quizzer who lives in Goa