Cloud seeding is a safe but improbable method to enhance rains 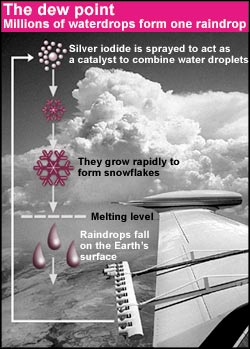 A bountiful monsoon brought cheer across the country this year. But a few areas, particularly in Karnataka, Andhra Pradesh and Maharashtra, were not as lucky as the rest. Governments of these states decided to change their fate with the help of an artificial rainmaking technique called 'cloud seeding'. Karnataka has already started seeding the clouds over its sky (the effort indeed proved to be worthy); others are commencing the same. However, in the past, Andhra Pradesh along with Tamil Nadu had failed in their cloud seeding endeavour.

Devised in the late 1940s, cloud seeding is defined as an intentional treatment of clouds to enhance rainfall. When aerially sprayed (with the help of aircraft, and at times rockets), certain chemicals such as sodium chloride (common salt) and silver iodide (another non-toxic chemical) can augment rainfall. Scientists working for the us-based General Electric Research Laboratory (gerl) perfected the technique during the 1940s and 1950s. The 1932 Nobel prize-winning chemist, Irving Langmuir, and his deputy Vincent J Schaefer are credited for their pioneering work in this field.
Millions of tonnes of water in the form of vapour, droplets and ice particles constantly flow in the atmosphere. Clouds are either made up of the tiny droplets or ice crystals; at times they are a combination of both. The droplets are so small, that it takes a million or more to produce a single raindrop. To form a cloud, the droplets first form around microscopic particles of dust, smoke, salt crystals, soil and other materials that are abundantly present in the atmosphere. Scientists classify these particles as cloud condensation nuclei. Among these particles, there are a few special ones, which are known as ice-forming nuclei; on these water droplets condense (due to their capacity to absorb water). Generally, there is a scarcity of the special nuclei (this may be a reason for the rainfall variations).

The process of condensation of the droplets is very important. It takes place as the air temperature drops; with that, the capacity of air to hold water vapour is reduced. If cooling continues, a point comes where the amount of water that the air can hold reaches its maximum capacity. This temperature is called the dew point. At this point, water vapour begins to condense into tiny droplets.

The condensation process can be of two types -- 'warm rain' and 'cold rain'. The latter happens in tropical regions; the process is so called because precipitation falls from clouds where the temperature is more than 0c. Rain is formed in the 'warm clouds' when larger water droplets collide with and absorb smaller ones. Substances capable of absorbing moisture from the atmosphere -- such as common salt -- are used for inducing 'warm rain'.

The 'cold rain' process occurs when the temperature, in all or some parts of a cloud, is less than 0c. These clouds are usually composed of both ice crystals and water droplets. The crystals grow rapidly, drawing moisture from the surrounding water droplets, until their weight causes them to fall. While falling, the crystals may melt and join with small liquid water droplets; they may then form into raindrops in a manner similar to the 'warm rain' process. If the crystals do not melt, they may grow into large snowflakes by agglomeration and reach the ground as snow. Silver iodide or dry ice (solid carbon dioxide) is used to supply naturally deficient clouds with the proper concentration of ice crystals to increase rainfall through the 'cold rain' process.

Scientists say that the weather modification process can increase the rainfall by 15-24 per cent on an average. However, the success rate is as low as 30 per cent, for scientists are not sure about the science of cloud formation and not all clouds are rain-bearing. Moreover, sometimes precipitation only occurs in small amounts, or not at all, because certain required conditions are not present. The most important conditions (both the initiation of rainfall and determining its amount) are as follows: the vertical and horizontal dimensions of the clouds; the lifetime of the clouds; the sizes and concentrations of cloud droplets and ice particles. Under proper conditions, seeding the cloud can even favourably modify one or more of these factors.

However, the process is exorbitantly expensive. Though gerl had proprietary rights of the technology, it put the process in the public domain, fearing litigation hassles if used by private corporations to induce rainfall in already rain-rich regions. Though otherwise harmless, the seeding may lead to copious rainfall in unintended regions, leading to floods. However, China has been using the technique to its fullest potential in rain-scarce provinces, particularly those that lie in the northern parts of the country.