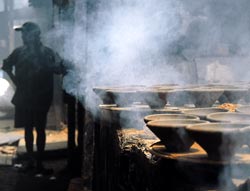 Before every Diwali Kumbharwada, the potters' colony in Dharavi, Mumbai -- infamously anointed Asia's largest slum -- bustles with the joyous energy of craftspeople rushing to meet demand from all over the country. The potters in the colony are busy this festive season as well, but the usual gaiety has diminished considerably. For, Dharavi faces an uncertain future. On the state government's anvil is the ambitious Dharavi Redevelopment Project (drp). Since February this year, teams of surveyors have been doing regular rounds of this area; according to a resident, "They ask questions and sometimes measure our jhuggies, but we do not know what all this is for. There are rumours that our jhuggies will be pulled down soon and multi-storey buildings would take their place." "Please tell us what this is all about, for our livelihoods are at stake," she pleads. This resident supplies 10 kilogrammes (kg) of papad everyday to the famous Lijjat Papad Company. She -- as well as other papad-makers of Dharavi-- refuses to be quoted because the last time a fellow papad-maker spoke with the press, her contract was suspended for a few days.

In marked contrast to Dharavi's residents, Mukesh Mehta, chief executive officer of the Mumbai-based M M Consultants and the brain behind drp, exudes confidence: "This is the first time that a project of this magnitude has been taken up anywhere in the world and is quite likely to be emulated in other parts of the state, the country and even in other developing countries." "All these fears emanate from canards spread by vested interests," he alleges. The Maharashtra government gave an in-principle clearance to Mehta's project (see box: Very ambitious) in February this year, much to the chagrin of Dharavi's residents.
Dharavi sprawls over 213 hectares (ha), houses close to 600,000 people and belies all standard definitions of a slum. Here papad-making and pottery units exist cheek-by-jowl with dance bars, while pickle-makers and leather workers jostle for space with waste-paper dealers, furniture makers and polishing units. Conservative official estimates reckon that there are 4,902 industrial units in Dharavi, of which textiles comprise 1,036, pottery 932, leather 567, plastic processing 478 and jari stitching 498 units. Other estimates say that everyday about 50 tonnes of chakli, 10 tonnes of banana wafers, 100 tonnes of chivada, one tonne of panipuri and 20 tonnes of chikki (all local delicacies) are produced in Dharavi. It's little surprise that the annual turnover of this bustling economic zone is about Rs 3,000 crore.

The new scheme will overturn this economy. "It intends to make Dharavi into a middle-income (a minimum yearly income of Rs 1 lakh per family) colony," claims Mehta. Builders will develop multi-storey buildings and slum dwellers would be shifted to 225 square feet (sq ft) houses here. The rest of Dharavi will be sold at the free market rate.

The Dharavi Redevelopment Project was cleared under the Slum Rehabilitation Scheme (srs) of the Maharashtra government's Slum Rehabilitation Authority (sra). But since Dharavi has acquired the infamy of a 'difficult' area, inducing builders required modifications in srs. For developing one square feet of Dharavi, a builder will get 1.33 sq ft area free -- which they can sell. This when, under srs, builders get 0.75 sq ft land free for every sq ft of land they develop for rehabilitation within Mumbai city.

But why this sudden interest in a filthy slum? Explains Raju Gorde a journalist with Dharavi Times, a local Marathi and Hindi newspaper, "Till a few years back, Dharavi was on Mumbai's outskirts. But today, the city has expanded and the slum is located at the heart of the city and can be accessed by two highways and two railway lines. It is not surprising that builders covet it." "The interest of Mehta and the builders is not to develop Dharavi but to make money," he adds.
papad-makers: At 8 am everyday almost every Dharavi household is abuzz with women going about making papads. This goes on till 5 pm. "I remember as a child, I would help my mother make papads. It was with money earned from papads that she educated her children and got us married. Now I make papads and my children lend a helping hand," says one enterprising woman.

A papad company sends about 10 kg flour to each papad-maker's household, everyday. Very often children help in the activity; then the papad output goes up to 20-25 kg a day. Women have to arrange for water and kerosene oil. The day this Down To Earth correspondent met the papad-makers, there was no water supply and so the women had no work. Erratic water supply is a permanent bother for Dharavi's papad-makers. So is kerosene oil: the monthly ration quota is a fixed at a paltry eight litres, but each papad-making family requires an additional 10-15 litres per month, which the women have to procure from the black market at a rate of Rs 30 per litre.

Sunlight and open spaces are an absolute necessity for this business: without adequate sunlight papad would turn black. So the papad-makers' houses are two-storeyed: they carry on the business on the first floor which has an open terrace, while family lives on the ground floor. But as per the new scheme, papad-makers will have to move to 225 sq ft houses in multi-storey buildings. The work they do is legally characterised as domestic; it is not recognised as an industrial activity. This has incensed many. "How can we live in these high-rise building? Where will we dry papads?," asks an irate papad-maker. A 'friend' of hers actually believed in the new scheme and shifted to a multi-storey building near Dharavi police station. Within six months, she had to leave her papad business; today she sells vegetables!

kumbharwada: In this 5 ha stretch, potters demonstrate how best to go about with their business while economising on space. All houses have mezzanine floors. A kumbhar (potter) took this Down To Earth correspondent to his 950 sq ft house that had an additional 1,000 sq ft mezzanine floor space and then asked: "How will they accommodate us in 225 sq ft? How will we make pots? Where will we dry and burn them?" "Rather than multi-storey buildings we need gas for our bhattis. We work under hazardous conditions with smoke all around. Most kumbhars suffer breathing problems, but no one cares," he added.

koliwada: This fisherfolk colony is the oldest in Dharavi: the community claims to have been here for the last 300 years. "Earlier the creek used to come right till our colony and our business prospered. But then the government took away our land and gave it to builders, who filled up the creek with soil and developed multi-storey buildings. The trawlers of rich fishing companies put paid to whatever little business that survived. And now the government wants to even take away the little land we have," says Trijaitai Kilekar, an active Koli community member.

This fishing community could be worst affected. The prospect of leaving their fairly large houses and moving to 225-sq ft hovels has incensed many of them. Lashes out Kilekar, "I have a huge house spread over an area of 5,500 sq ft. The total cost of my land is about Rs 3 crore. Even two houses of 225 sq ft each would not compensate me adequately. So far we have kept quiet, but now we will protest," she asserts. Kilekar also offers an alternative. "Why doesn't the government give us an opportunity to develop our lands? Give us loans and we will make multi-storey buildings."

leather works: Dharavi's leather products are exported to France, Germany and a few other countries. Finished leather is sourced from Chennai, then cleaned, dried, dyed and made into various products. "My unit cleans 1,000 pieces of leather measuring 12 feet each, everyday. So, I require at least 1,000 sq ft of space; sunlight is equally necessary," says Chandrakant Sadashiv Kadamb, the owner of a Dharavi leather unit. "Dyeing also leads to pollution. We should be rehabilitated in an industrial area because we use very heavy machinery weighing anywhere between 2 tonnes to 15 tonnes," he adds.


Mehta agrees that developing Dharavi will not be easy. "We have made repeated attempts to start a dialogue with the Kolis but they are not interested," he claims. He also claims to have forwarded separate proposals for Dharavi's fisherfolk, potters and leather workers, to the state government. "Co-operatives will be created for the benefit of potters, leather workers, jewellers and small manufacturers of readymade garments. The state government has started interacting with the Ahmedabad-based National Institute of Design and intends to create a brand called Dharavi for various products. This will increase incomes; the income of a kumbhar family will increase from present Rs 35,000 a year to Rs one lakh a year," asserts Mehta.

Experts pooh-pooh these claims. "There is no involvement of the local people. The idea is to confine slum people in as less a space as possible and use the rest of the land to earn huge profits. As per my rough estimates, a builder will earn about Rs 21,000 crore out of the scheme," alleges Chandrasekhar Prabhu, a sra member. Anirudh Paul, executive member of Mumbai-based Collective Research Initiative Trust, which is working with slum populations in Mumbai, questions the high maintenance cost of the scheme, "The maintenance cost of such buildings is Rs 3 per sq ft. Slum dwellers cannot afford it. And even if they initially shift to these sky-rise buildings, they will soon be forced to vacate and squat in new slums."

Mehta rubbishes such allegations. "All this talk of Rs 21,000 crore profit is absurd. I expect profits to be a reasonable 20 per cent. This is a public-private sector partnership project and it is only reasonable that both sides should profit." But a question remains. Why can't slum dwellers form their own cooperatives and develop Dharavi? If past experience is anything to go by, most slum rehabilitation schemes have just been thrust down people's throats. And that is why almost all have failed. Will the Dharavi Redevelopment Project be any different?