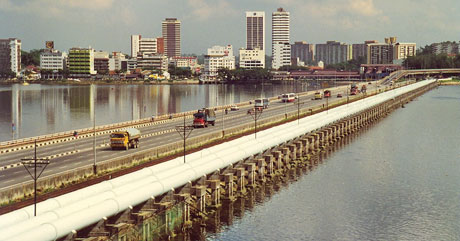 How does a city-state that has no natural water body, very little groundwater and even less land to store rainwater quench the thirst of its five million people? Singapore faces this question just as one of its 50-year water import agreement with Johor, now a part of Malaysia, expires in September. After all, the Malaysian import accounts for 40 per cent of Singapore’s total water supply.

The price of water is extremely low with Malaysia not having accounted for inflation in the past five decades. Cheapest among all sources, it stands at one Singapore cent per thousand litres. The city-state charges more than one dollar for the quantity from its people.

Its national water agency, Public Utility Board (PUB), is working overtime to meet its water demand on its own by 2060. It aims to reduce, and possibly eliminate, Singapore’s Malaysian dependence by strengthening its three methods to tap water—treat wastewater, desalinate seawater and maximise collection of rainwater.

The city-state receives 2,400 mm rainfall each year, double the world average. Yet, it is a water-scarce country because of the limited land where water can be stored. PUB is, therefore, making huge investments to develop expensive water sources.

In the 1970s, Singapore started recycling wastewater. A pilot project was launched to treat sewage back to potable water standards. It subsequently built a sewerage network that could help reuse wastewater instead of flushing it into the sea. But the project did not take off because of prohibitive costs. As technology improved, the cost of treatment dipped. In 2002, it reclaimed water from a sewage treatment plant at an additional cost of 30 cents per thousand litres using advanced membranes, filtration and disinfection. It was branded NEWater. 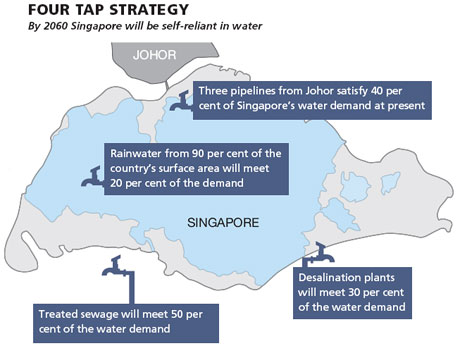 PUB set up five plants which produce more than 530 million litres of water that is almost as pure as distilled water. About 95 per cent of this is used by the IT manufacturing industry which needs purest possible water. The rest is mixed with raw water in reservoirs.

Although the two countries are constantly in talks trying to strike a new deal, PUB opened its second “national tap” in 2005 by treating sea water. This is the most expensive source at 78 cents per thousand litre. But Singapore prefers shelling out a huge amount to depending on Malaysia, fearing political ransom, PUB sources say.

By 2060, “we plan to increase desalinated water and NEWater capacity from the present 10 per cent and 30 per cent respectively to 30 per cent and 50 per cent of the total requirement,” says Koh Joh Ting, a PUB official.

Singapore built its first reservoir in the mid 19th century. By 2010, the city connected about two-thirds of the country’s surface area—700 square kilometres—to an extensive network of drains and canals that channel storm water to 19 reservoirs. These take care of about 20 per cent of the total water supply.

To maximise the use of rainwater, PUB has pioneered a first-of-its-kind plant that can treat water from small streams near the shoreline. Reservoirs have already been created in Singapore’s major estuaries. The new Variable Salinity Plant operates as a desalination facility during lean spells of rainfall because water is highly saline at that time. The plant automatically switches to treating freshwater during rainy season when the salinity is less. This technology will help PUB harness rainwater that falls on 90 per cent of the country’s surface area.

Singapore aims to become self-reliant by 2060. Till then, Malaysia will remain its major source of water. The two pacts will ensure water import from Malaysia till 2061. When Singapore separated from Malaysia in 1965, the agreement signed between the two governments guaranteed the 1961 and 1962 water pacts. At present, Singapore gets water through three large pipelines that run parallel to a two-km causeway which connects the two countries.

In the early 1960s, this water met Singapore’s daily demand of about 300 million litres. With increase in population, the demand has risen to 1,730 million litres. The requirement is set to double in the next 50 years.

“We call on people to conserve water, keep catchments and waterways clean, and build a relationship with water so that we can enjoy our resources,” says Ting. In 2003, a Singapore resident used 165 litres of water every day. This came down to about 155 litres by 2009. With the ongoing awareness programmes, PUB aims to reduce this by eight more litres by 2020. “When our second agreement to import water expires in 2061, we can be self-sufficient if necessary,” he adds.

Singapore has set an example for water managers the world over. There is a lesson in it for India too because the authorities in India do little to improve their own catchments to collect and store water. They, instead, seek to source water from distant reservoirs.
Special Report Special Report Water Treatment … Water Supply Water Resources Water Management Water Harvesting Water Demand Water Conservation Wastewater Recycling Wastewater Recycling Singapore Rivers Reservoirs Malaysia International Cooperation Desalination Desalination
SUPPORT US