India wants global waste. So it gets what it wants

The paper manufacturer, Sripathi Paper and Boards, was penalized for illegal import of hazardous waste and asked to export the containers and bear its expenses, said S Chandramohan, additional commissioner of the Tuticorin port. A similar incident happened in 2007-08 at the same port. It turned out that itc Ltd’s mixed waste paper consignment—40 containers—had high concentration of municipal solid waste. The next year the company returned the containers to the US as per a court order.

These are but a few success stories. Customs officials acknowledged their inability to check every container because of shortage of men and machinery. They resort to random checks—in the case of Sripathi Paper and Boards’ consignment the department’s intelligence team tipped off customs officials. Besides, it gets difficult because the department has to depend on engineers from pollution control board to determine whether a substance is hazardous.

Of the 12 major ports and 14 intermediate ports in India, one—J N port at Nhava Sheva in Mumbai—has two scanning machines. More than a million containers arrive at the port and it is impossible to scan every container, said Yash Vardhan, director of Container Corporation of India. The scanners have limitations. If cobalt-60, a radioactive substance, is packed in a lead box, the scanners would detect the lead because the metal blocks radiation from cobalt-60. “How should the customs department detect it?” asked Vardhan.

Beaches and small ports have grown to be hubs for illegal import of hazardous waste, said a senior customs official asking not to be named. “However much we try, several hazardous waste consignments bypass us,” he added.

The standard procedure followed for importing a consignment to India involves an importer, an exporter, an agency registered and notified by the Directorate General of Foreign Trade, a bank and the customs department at the port. First, the importer is required to get a pre-inspection certificate of the import material by a registered agency, which could be an Indian or a foreign company.

After the agency issues the certificate, a bill detailing the number of containers, excise duty classification and product details is prepared. Then the consignment is shipped. When it reaches India, customs officials at the port check the certificate, levy a customs duty on the product as specified in the Central Excise Tariff Act and release the consignment to the importer.

If the material imported turns out hazardous, like in the Shivakasi “wastepaper” import, it is returned to the exporter, without a customs duty. Or not returned at all. “Confiscation of goods on such imports is rare. Imposition of a fine is part of organized corruption at the ports where customs clearance agents bribe customs officials,” a customs clearance agent in Kandla said. An official of the Directorate General of Foreign Trade also acknowledged that at times customs officials allow importers to escape the full penalty by an under-assessment of illegally imported goods.

Then there are times the importers are genuinely cheated. That is because they look for information on registered agencies and exporters mostly on the Internet. This has its share of risks—the biggest is that of getting cheated, importers say. Exporters show photo-graphs of a consignment, pure iron scrap for instance, but it turns out diffe-rent—mixed scrap—when it reaches the importer. Inspection can be done by checking the total amount of goods and verifying compliance with the standards of the destination country.

In India, the Union Ministry of Environment and Forests decides on what hazardous waste can be imported and exported. Under the Hazardous Waste (Management, Handling and Transboundary Movement) Rules, the ministry has placed import of hazardous waste items under three categories—substances that can be imported with prior consent, free imports under Open General Licence and prohibited.

The first category includes metal and metal-bearing wastes of antimony, lead, galvanic sludges and waste lead acid batteries, whole or crushed. An importer is required to have a licence from the Directorate General of Foreign Trade. The list in the second category comprises materials such as iron, steel and zinc scrap; lead scrap except lead acid batteries; waste of copper and its alloys. The waste listed in this category are traded under Open General Licence. The third category, prohibits import of waste contaning mercury, beryllium, arsenic, selenium and thallium.

Over 10,000 items, hazardous included, are imported in India, commerce ministry officials said. These items are classified under various heads. The category ‘others’ is given to those items that cannot be classified under any head. Even the environment ministry does not know how to describe categories such as ‘other waste and scrap’.

Traders often end up making use of ‘others’.

“Different types of metal scraps are available in the international market. If I wish to import steel scrap and am not sure whether it’s pure, I would put it in the category of ‘other waste and scrap’,” said a dealer in Ludhiana.

Steel scrap is used to prepare secondary steel, of which India has one of the biggest markets in Asia. “With the scrap, input cost for preparing secondary steel reduces by 10 per cent. This helps earn more profits,” said a secondary steel manufacturer in Punjab who did not want to be named.

India’s secondary steel market has come under the scanner because of manufacturing defects—several times the steel made from metal scrap has turned out to be radioactive. In 2009 German magazine Spiegel Online reported that radioactive steel imported from India was on the rise in Germany. The country had seized 150 tonnes of contaminated metal exported by India between August 2008 and February 2009. In October 2008, radioactive substances were found in 500 elevator buttons prepared by French company Otis.

Recyclers in India say since they don’t get enough waste in the country, they are forced to import such waste.

India produces 6.2 million tonnes of hazardous waste annually, according to Central Pollution Control Board’s 2008 data. According to the board, hazardous waste generation is high in Gujarat, Maharashtra, Andhra Pradesh, Chhattisgarh and Rajasthan. These states do have common hazardous waste treatment, storage and disposal facilities, but not all the waste reaches the facilities. 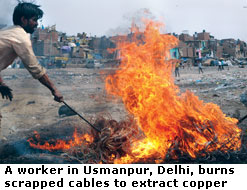 There are pilferages, but it’s the duty of state pollution control boards to plug these loopholes, said an official of the environment ministry. A lot of the waste, added an environmental engineer from the Central Pollution Control Board, is disposed of into rivers, drains or landfills.

India imports most of its metal scrap from the US, the UK and the Arab countries. As per the US Institute of Scrap Recycling Industries, the country’s exporters in 2005 shipped more than US $350 million of scrap commodities to India.

The choice India faces is this: either it stops importing waste and thereby gives up the option to make money from recycling. Or it imports waste but regulates it better so as to distinguish a resource from what the world wants to dump here unscrupulously.

Names of some people have been changed to protect their identity