The planting of commercially valuable chir trees has become embroiled in controversy in Ultar Pradesh's Almora district. But a local schoolteacher has found a novel use for its discarded bark. 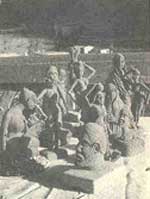 A CONTROVERSY is raging over the chir (Pinus roxburghill trees that are being planted oin Himalayan slopes because it grows quickly in virtually ravaged soils, though local residents complain the chirs absorb groundwater and discourage undergrowth.

Chir trees are found in abundance from Pakistan to Arunachal Pradesh and its logs are used in a variety of commercial purposes. Its bark, however, is usually thrown away as it is not even good fuel.

But Bhagwan Das Shah, a 40-year-old school- Creating teacher of Dwarahat, in Almora district, has an excellent use for the unwanted bark. He carves exquisite figurines from the bark, blending a rustic. vigour with a personal passion that captures the feeling of the hill people whose environment is being devastated by outsiders.

Lacking formal training in carving, Shah relies entirely on his experience as an amateur painter. Initially, he carved driftwood and dried roots but switched to chir two years ago, inspired by a friend who was experimenting with bark jewellery.

Shah takes about five full working days to convert a piece of bark into a delicate statuette. The shape and form that the dry bark piece takes depends not only on its size and te3fturd, but also on Shah's mood. He spends most Sundays collecting 3 bark,, explaining, "My job obligations do not permit me to spend all the time I want on carving.

On the chir-planting controversy, Shah wants local opinion to be given more consideration, which means planting more oak trees instead of chir. He does not worry that this would result in a dearth of chir bark for carving, because the region abounds in the pine.
Although Shah does not sell his products - he says carving is a hobby - he is confident that carving statuettes of chir "can be a very good income-generating activity in this area." Shah suggests opening government centres to train people, especially children, to make useful products out of bark. "These could be exported," he explains, "and a lot of foreign exchange earned. But,of course, the money should go to the craftsperson and the best way to do this it would be to form cooperatives."

Shah has hopes of training children "to promote self-sufficiency." But his teaching responsibilities restrict him to training children in only how to make trays and table-lamps. Shah concedes that lacking training in marketipg and finance hinders him from setting up his own outfit. "My knowledge about commercial matters is almost negligible," he says. "I wouldn't even know how to fix prices for these products. But, given some incentives, I could even start a training centre," he says. For now, Shah can only continue with his hobby whose products are on display in his modest home in Dwarahat. Shah remains a schoolteacher while continuing to dream.

"I wish the government had schemes to train people like me so that people could earn a living beautifying a waste product," he says.