The relocation plan would have made more sense if it was done soon after a committee set up by the energy ministry in 1976 found underground fire active in the Jharia coalfield. Then, bccl did not even consider relocation. The Jharia Rehabilitation and Development Authority (jrda), responsible for shifting non- bccl employees, estimates that in seven years since the first master plan came up in 1999 the population of the Jharia coalfield risen by over 40 per cent.

The first committee to control fire and prevent subsidence was set up in 1922 under the Union coal ministry. Since then there have been several committees on fighting fire, but little action (see Action not taken).It was in 1997 that a committee set by the Directorate General of Mines Safety (dgms) on the Supreme Court's direction noted there was no scientific method to ensure the long-term stability of fire sites and the permanent solution was evacuation of the affected areas. Till then fire-fighting efforts did not include relocation.

"It's true rehabilitation would have been easier a few decades ago. The state took three years to approve the master plan and we are yet to get clearance from the Centre. Dousing fire needs a national commitment," said Lahiry of bccl.

However, bccl's commitment to douse fire itself is suspicious. Since the plan was conceived in the 1980s to douse 70 fires, it has extinguished only 10. Activists of the Jharia Coalfield Bachao Samiti allege the mining major extinguished fire at 10 places because it wanted to start mining there. " bccl keeps the fire alive to keep the people away. When they plan to mine they extinguish the fire," alleged Ashok Agrawal, president of the group.

bccl denied the charges. "We do not nurture fire for personal gains. Fire is destroying coals worth millions of rupees. It's a loss to the company and to the nation," said Lahiry.

Former scientists, who risked their lives to prepare technical strategies to douse fire or to mine burning coal, also accuse bccl of taking up dousing only till it achieves its mining targets. T K Singh, a retired scientist of the Central Mine Planning and Design Institute, recalled a project funded by dgms for building a barrier between a mine on fire and a village and then mine burning coal. "It was a risky project. The plan was conceived by me. We were implementing the project that would have stopped the fire from spreading and saved coal," Singh said. "But my project was stopped midway because bccl achieved its fiscal target of mining 0.3 million tonnes of coal from the area. It was a disgusting experience." bccl dismissed the allegation as wild.

Activists also accuse bccl and the government of misleading the people. Raja Shiv Prasad college, a few kilometres from Dhanbad town, is likely to be shifted since the fire is nearing its campus. "Till last year the company was claiming the college was safe. They have given it in writing under rti that there is no threat to the college. Their stand keeps changing. Their facts and figures are old," said Agrawal.

According to the 21st report of the business advisory committee to Parliament presented in 1992, fire has destroyed about 37 million tonnes of quality coking coal that's used in the steel industry. Recently, a mining lease given to a private company backfired because while digging it found more than half of the lease area engulfed in fire. To control the loss, the Coal India Ltd and its subsidiary bccl in 2004 decided to focus on areas where fire can be handled by removing coal. The aim was to dig out half the coal before it is burnt. bccl estimates 1,453 million tonnes are trapped in fire. 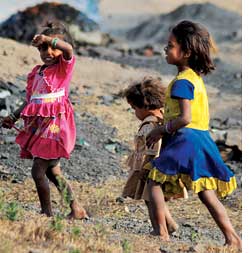 In February this year, Coal India said it planned to revive coal mines at Jharia. "If the mine fire is controlled and this facility (coalfield) is properly utilized, it alone can cater to the coking coal need of the steel industry," said the company's chairman P S Bhattacharyya. Some officials suspect bccl is insisting on relocation because it wants to take up opencast mining there to save costs. The coal ministry estimates dousing the fire will require Rs 4,070 crore, less than relocation. But bcci says even to assess the spread of fire, it needs to shift people. Its pace of efforts, however, do not match the magnitude of the problem.