Slow, but sure, poisons

Explosive shells in scrap metals is one thing. Extremely toxic metals quite another

Slow, but sure, poisons 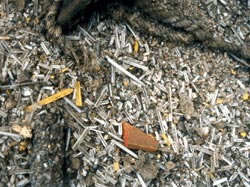 Mercury:Dubious Distinction
India has decided to play with the tools of the devil. It wants to import huge amounts of mercury, which the rest of the world is quickly phasing out (as it is highly toxic and dangerous). But why should this deter us?

The import of mercury waste and mercury waste compounds as constituents or contaminants is completely banned under the hazardous waste rules. But the problem is that even as we ban waste imports, we import huge amounts of mercury compounds. Mercury is a hazardous substance. But more importantly mercury is recyclable.

Therefore, it is impossible to say what we have imported as mercury is recycled waste or a virgin mineral. For instance, as huge industrial units based on mercury are being phased out in Europe and the US, these countries do not know what to do with their mercury. Spain is the key miner for the world and what is now being discussed is how the recycled waste of these phasing out countries can be sold on the world market as a primary mineral.


Mercury is one of the most toxic heavy metals and has several documented, serious impacts on human health. The metal and its compounds are especially harmful to the developing nervous system of children. Methylmercury, a common compound, readily breaches the placental barrier and the blood-brain barrier. It is severely neurotoxic, and impairs the developing brain.

Mercury is being phased-out across the industrialised world. But not in India. We are ushering it in. India's mercury imports have more than doubled in the past seven years -- from 254 tonnes in 1996-97 to 531 tonnes in 2002-2003. This has given India the dubious distinction of being the largest mercury consumer in the world (see table: Heavy metal load). Mercury serves as raw material for various industrial sectors. A common application is in mercury cell-based chlor-alkali plants. It is also used in pesticides, batteries, electrical and electronic gadgets, thermometers, dental amalgam fillings and paints.


But even as we import mercury, we don't know where it is being used. The Union government has no idea. What's known is that the chlor-alkali sector uses 70 tonnes of the total imports. Other uses account for 62 tonnes. But the net mercury import in 2002-2003 was 531 tonnes! Where did 399 tonnes disappear?

That's not all. Import of organo-mercury compounds has increased by an astounding 1,500 times between 1997 and 2003. These compounds are mainly used as pesticides, herbicides and slimicides (which kill bacteria in industrial processes such as those used in paper manufacture). These are illegal imports because most mercury-based agro-chemicals are banned under the Central Insecticides Act, 1968.

What explains this surge? According to the United Nations Environment Programme's Global Mercury Assessment Report 2002, the phasing out in the rich world has crashed prices and India finds it lucrative to trade in this toxic mineral. 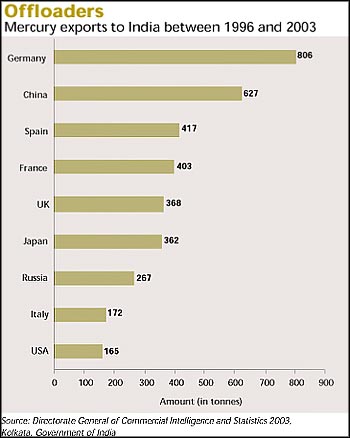 Europe sends the most. Spain, Italy and the UK are major exporters of elemental mercury to India, whereas Germany and France ship organo-mercury compounds (see graph: Offloaders). Most of the mercury coming from the UK, Italy, Germany and France is recovered from wastes (mercury recovered by distillation from sludge of chlor-alkali plants and from other solid wastes), as they do not have mercury mining. But neither the Basel convention nor our own hazardous wastes rules can stop this toxic trade. The reason: the metal and its compounds are not in the form of waste, though they are hazardous and derived from waste.

Interestingly, even as India made a big deal about re-exporting spent mercury to the US, from the Hindustan Lever Ltd plant in Kodaikanal, the US actually exported more mercury to us in that same year.


India's future, that is. By 2010, the EU will have about 13,000 tonnes of leftover mercury from its closed chlor-alkali plants. It has already signed an agreement with Minas de Almaden, Spain's biggest mercury miner, to take care of the problem. Minas will buy this 'waste' and pass it on to developing country markets. The US, too, has about 4,435 tonnes of mercury reserves it needs to get rid off. What's to stop it from treating India as the ideal dumping ground? India could witness the next Minamata disaster?

Lead:Illegal Gains
Trade in lead-acid batteries, used chiefly in automobiles, is big business worldwide: major exporters are Japan, Australia, the us and the uk. Japan, for instance, exports 30,000 tonnes to Southeast Asia each year. These batteries are smelted to recover and recycle lead. The work is dangerous and polluting, but on this huge business depend thousands of people.

Realising its potential, the Union ministry of environment and forest (m o ef) has framed the Batteries (Management and Handling) Rules, 2001. These rules apply to every manufacturer, importer, re-conditioner, assembler, dealer, recycler, auctioneer, consumer and bulk consumer involved in manufacture, processing, sale, purchase and use of batteries or components.

The rules do not ban import, but specify that only those will be allowed to carry out recycling who possess environmentally sound management systems and are registered with the m o ef/ Central Pollution Control Board (CPCB). Importers, too, have to register themselves with the CPCB. Till date, m o ef has registered 58 lead recyclers across India, with a total capacity of 342,790 tonnes per year (see table: High and dry).


Are the rules sufficient to regulate import and trade in lead batteries? Market estimates of various government agencies are utterly confusing. According to the report of the High Powered Committee on Management of Hazardous Waste, the annual demand for lead is about 160,000 tonnes, half of which is met through imports. In the 10th Five Year Plan draft report, the Planning Commission estimates there is an annual shortfall of 32,400 tonnes in the lead demand and supply. This is met through imports -- of scrap of various kinds. In addition to lead batteries, India imports lead waste and scrap from several countries. In 2002-2003, as much as 31,282 tonnes of lead scrap made its way to India, as against 16,345 tonnes in 1997-1998 -- almost doubling in five years. The problem is nobody quite knows where this waste ends up.

Compounding the problem is the fact that 70 per cent of the lead is used in batteries manufactured in small scale and rebuilder (reassembled) factories across the country. And despite the rules, this sector remains unorganised and outside the ambit of law. It sources raw material from a variety of dealers.


This is where the lead recyclers come in. Of all the lead recycled, 70 per cent occurs in the informal sector: lead is smelted in the open, with no pollution control. Take Uttar Pradesh. It has only seven registered recyclers in cpcb, but more than 50 informal units operate from Ghaziabad district alone. "Mandoli village near Delhi has about 50 units processing close to 100 tonnes of lead per day. Such units are also spread across Qutabnagar, Shahbad and Loni near Delhi," says Anup Gupta of Gupta Metal Works, Ghaziabad, whose unit is registered with m o ef . Down To Earth reporters confirmed this when they visited the factories continuing their dirty operations.

The economics support the informal sector, allege registered recyclers. How? In the minutes of the February 1, 2001 meeting of m o ef's core group on batteries, it was discussed how the illegal trade in lead acid batteries thrives in the country. The ministry reported lead-acid battery producers have to collect their used products. But in 2001, Exide Industries Ltd, a major battery producer, was able to get back only 10-12 per cent of batteries it had sold, as against a target of 50 per cent. The informal sector is able to undercut the big players by offering better prices. For instance, the informal sector offers Rs 180 for a used car battery, while the organised sector offers only Rs 80. For a used truck battery, the organised sector offers Rs 600, while Delhi's Gokhale Market (a hub of recyclers) offers Rs 1,000. In the same meeting, it was established that the system of registration does not seem to be working. In its 2002 survey, the ministry found clusters of illegal lead traders operating in Delhi; in Gokhale Market near Kashmiri Gate, Motia Khan in Old Delhi and Gali Lallu Misr in Sadar Bazar.

The government recognises its inability to check the numbers of illegal lead recycling units in the country. It is often alleged that as the registration procedures are so cumbersome, an illegal trade also thrives for import of lead batteries. The procedure to import lead-acid batteries into India is simply too lengthy, say importers. Clearances are required from spcbs, m o ef and the Directorate General of Foreign Trade; so, it takes years.