Small farms can be profitable

Small farms can be profitable 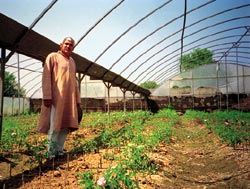 Rupees 10 lakh every year, from one-hectare (ha) land -- an unbelievable proposition for all those bought up on the much-propaga ted idea that small farmlands are unprofitable. But Ramesh Chander Dagar has made this proposition into a reality. A visit to his farmland in Akbarpur Barota village, Sonipat district, Haryana can be quite an eye opener. The farmland resembles the laboratory of any agricultural scientist. Says Dagar, "I am a simple farmer, who has studied only up to the 10th standard. I used to keep hearing claims of the government that small land holdings are not viable for agriculture. And that set me thinking. About four years back, I set aside one ha from my agricultural land and started experimenting on it. Today I am confident that this land can give a minimum income of Rs 10 lakh per annum."

Dagar follows what is known as integrated organic farming. "Such farming does not merely mean not using pesticides," he says. "It also comprises many other practices such as bee keeping, dairy management, biogas production, water harvesting and composting. A good combination of all these practices is sure to make organic farming successful, both ecologically and financially," adds Dagar.

Today he is busy spreading the message of integrated organic farming in his home state. With support of other farmers, he has set up the Haryana Kisan Welfare Club, which has branches in all districts in the state. Close to 5,000 farmers are active members of this club and they are fast spreading the word around. In states such as Rajasthan, Madhya Pradesh and Gujarat there are now efforts at replicating organic farming clubs.
Learning by doing Dagar started farming with a mere 1.6 ha land in 1971; today he owns close to 44 ha, all of which is completely under integrated organic farming. A clear understanding of three factors -- the market demand, the natural resources available and maintaining the product quality -- helped him succeed. Most organic farmers find it difficult to get good markets for their produce, but not Dagar. "Before sowing a new crop, I first do a market survey and understand the demand. It is only when I am 60 per cent sure of getting returns, do I take 40 per cent risk," he says. And in most cases it works to his good.

Almost all seasonal vegetables, fruits, paddy, wheat, mushroom and flowers are grown organically in Dagar's farm. He has also started growing exotic vegetables and fruits, such as lettuce, baby corn and strawberry, for export. This innovative farmer has set aside one ha for research purposes (Dagar's research lab). "Through this land, I want to prove wrong all those who doubt the profitability of organic farming. With a bit of hard work and understanding of nature, any farmer can earn a minimum of Rs 10 lakh per annum. I do not understand why everyone is running after a job?" he asks.
Dagar's research lab Dagar's lab oratory is a visual extravaganza. One can witness composting taking place at one end, flowers growing at the other end, a farm pond with fishes, and a biogas plant. And all these elements in his farm are interlinked through various agrocycles and together generate an annual income of Rs 13-14 lakh (see table: Farm gold). Moreover, the farm saves precious energy by using solar power.

Let us look at the cycle of vermicomposting followed in Dagar's farm. "Almost all Indian farmers burn the left over of paddy crop, locally known as pawal. Actually this is an excellent raw material for vermicompost (compost made using earthworms). Through its use, I produce 300 tonnes of vermicompost, annually," says Dagar. "A part of that is consumed in the fields and rest is sold at a rate of Rs 3 per kilogramme (kg)," he adds.

Dagar claims vermicompost is the best soil-nutrient for not only does it help the soil retain moisture but also reduces water consumption by almost 25 per cent. He provides 2 kg of earthworms free of cost to farmers, who pledge to go in for organic farming He also uses the pawal to grow mushroom, which fetch him close to Rs 3 lakh per annum. Apart from vermicompost, Dagar also produces the normal compost; the total annual generation of manure from his farm is about 600 tonnes. Dagar aims to increase this to 1,000 tonnes by the end of this year.

Another agrocycle at the farm is dairy, biogas and composting. There are about 50 buffaloes in Dagar's dairy. Their gobar (manure) is fed into an 85 cubic metres capacity biogas plant. Setting up the plant cost him about Rs 1 lakh. The gas is then used in his personal kitchen, and also used to run the fodder-cutting machine. The 'waste' from the plant goes to the composting pits.

Dagar's farm pond is the site of yet another innovative cycle. Most farmers avoid having such a pond since that would eat away precious agricultural land. Says Dagar, "We tell farmers to go in for water harvesting, but do not make sure it makes economic sense to them. This predicament set me thinking. And I decided to go in for water harvesting, which also gives immediate benefits." His farm pond collects rainwater, which is used in the dairy to wash buffaloes. "I have also introduced fish into the pond; that fetches me about Rs 30,000 per annum. So, I am not only recharging groundwater, but also making money out of it," explains the organic farmer.

The most important element of Dagar's farm practice is bee keeping; it increases his crop output by 10-30 per cent (bees are very effective in natural pollination). Also the honey produced has great demand . Dagar has about 150 bee boxes; each generates about 35-40 kg of honey. His total annual income from honey is Rs 4 lakh. "Bee keeping is a very profitable business that can be undertaken by even a landless farmer. And one farmer can benefit an area of about 2-3 km, the normal area covered by one bee," says Dagar.

Dagar has also set up solar panels at a total cost of Rs 4 lakh; he spent Rs 67,000 on it and the rest came from a government subsidy. At his farm, solar power is used to run the pump that draws groundwater for irrigation. The surplus power is used to recharge batteries of the household inverter. The farmland has a green house spread on an area of 500 square metre, which is used to grow expensive crops that fetch him Rs 1 lakh per annum.

Spreading the word
Today Dagar is busy spreading the word of integrated farming throughout the country. Farmers from Haryana are playing a lead role in the mission. The Haryana Kisan Welfare Club gives hands-on training on organic farming. Since most farmers cannot come to the district clubs, workshops are organised at village level. In February this year, a gathering of about 4,000 farmers was organised at Sonipat. Apart from farmers, experts, agricultural scientists and bureaucrats were invited. But Dagar concedes that motivating government machinery towards integrating organic farming is a big task. " Jo sarak sarak kar chale who sarkar (The government is something that crawls along slowly)," he remarks casually.

But Dagar is not waiting for government help. He has made organic farming his mission."I keep experimenting with various crops in my field. For instance, right now I am trying to grow a Chinese plant, which is 300 times sweeter than sugar but is cholesterol free. If I am successful in my venture, I will recommend it to others. Since the plant has medicinal value, it has a huge international market," he says. Way back in 1987, Dagar had introduced baby corn in Sonipat on a mere 0.40 ha plot. Today, almost 485 ha land in Sonipat is under baby corn cultivation.

Future challenges
With success come new challenges. The cost of organic food is priced higher than food grown with the use of chemicals. Dagar has tried to turn this adversity to his advantage. He makes use of good marketing tactics to exploit the high premium on organic food. He has also tied up with voluntary organisations that market organic food. To be doubly sure, he himself conducts market research to ascertain the demand for various organic foods.

Another, problem for organic farmers like Dagar is that India lacks a streamlined procedure for certifying organic foods. Also one kind of certificate is not valid for all countries. "Agricultural and Processed Food Products Export Development Authority is the nodal agency which addresses the issue of certification internationally. It has about 10 companies registered under it, of which only one is an Indian firm. A day's visit of a company official costs about Rs 15,000. Which Indian farmer has so much money?" asks Dagar.

The Haryana Kisan Welfare Club has taken up this issue with the government, but without success. Finally it approached a Gurgaon-based private company for certification. The company should start work within a month. The club is following group certification scheme where rich farmers will subsidise the certification process of the poor ones. But it is high time, the Indian government facilitates the procedure and supports farmers like Dagar.