In the face of a rising demand for fish and a stagnating aquaculture growth, government wakes up to the potential of small fishery 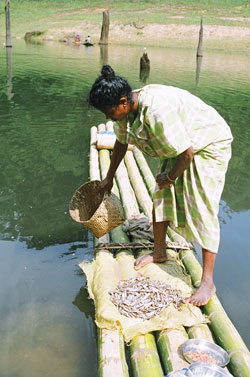 At a rural market, fishers selling tiny fish in small baskets cannot escape the curious eye. Often ignored as “trash” or “miscellaneous” by the formal fishery sector, small fish is a delicacy rural people line up for. A loving husband would never miss the chance to give his expecting wife a meal full of nutritious small fish. A mother would always pursue her children to have them for good eyesight. And children make sure to take time out for fishing at the village pond, and help family to bring in some cash. Small fish plays a big role in the lives of India’s poor.

Now, the government desperately needs small fish and fishers for a bigger role—to sustain its much-famed Blue Revolution. But it is not an easy task. There is very little scientific knowledge or documentation of small fish species. As India became the second largest producer of freshwater fish by taking up extensive big fish farming, its indigenous small fish species slipped out of everybody’s radar.

Of the 765 freshwater fish species in the country, 450 are indigenous small fish, defined as fish that grow up to 25-30 cm in length. According to the recent livestock census, 10 million people are engaged in inland fisheries. A major chunk of them depend on small fish. About 23 per cent of small, indigenous fish species are of economic value as ornamental fish. According to a study by the National Bureau of Fish Genetic Resources (NBFGR), of the 104 small fish species studied, 62 are important for food security. Traditional fishers in the floodplains of the Ganga and Brahmaputra river basins earn 30 per cent of their daily income from small fish.

Besides, small fishes are the richest source of nutrition and are inexpensive. One kilogram of small fish provides minerals and vitamins equivalent to those in 40 kilograms of big fish.

W S Lakra of NBFGR says, “The number of species is declining because of mindless development activities, water scarcity and loss of biodiversity.” Water bodies and small streams have dried up across the country. Add to this, pollution due to chemical and domestic wastes. “Marshlands are shrinking due to urbanisation,” says Shyamlendu Biswas of Direct Initiative for Social Health and Action. “In rural areas, use of chemical fertilisers affects breeding of small fish. Lack of artificial breeding ground of these fish is a major concern.” According to NBFGR’s study, of all the important small fish varieties, six are already endangered and 16 are under the vulnerable category.

Government’s policy of water body licensing is also responsible for keeping small fishers away from fishing. Revenue departments mostly lease out small water bodies with the sole motive of profit. The licence fee is too high for the poor to afford. Therefore, most of the water bodies are in control of private contractors. Also, government has not given enough scientific input or support to this sector. “There is no government policy related to this dying ecosystem. There are only 50 scientists available against the required 200,” says Behera.

The Blue Revolution, which initially triggered production of freshwater fish from aquaculture, has been stagnating for years now. The government now wants to exploit the vast potential of small fishery to keep pace with the increasing fish demand. The only option for the government is to depend on small fishery.

Fish accounts for six per cent of India’s food budget as 60 per cent of the country’s population eats fish. This is set for a jump with increase in overall income. The national fish consumption will reach 6.3 kg per capita by 2020 from 5.6 kg in 2011. The projected additional demand for 2020 is about 3.21 million tonnes, of which 90 per cent is expected to be met from freshwater sources. But due to lack of species diversification and declining yield, freshwater aquaculture is stagnating. Such is the demand and supply imbalance that during 2006-11, prices of fish doubled. While there are 15 to 20 species for commercial culture, only three species of carps contribute 87 per cent of freshwater aquaculture production in India. It is estimated that 38 per cent of future fish demand has to be met from small fish.

The 12th Five Year Plan has stated that there is scope to enhance production three to five times in these areas. this will help bridge the demand and supply gap. But revival of small fishery is almost equal to revival of water ecology. It also involves a paradigm shift in the way government has been managing local water bodies. The first major challenge is to restore the ponds and tanks that have silted.

Government has proposed to use the national rural employment guarantee scheme for this. Thousands of water bodies will be constructed and renovated. The second challenge is to make the revival work for the poor. “Ownership of water bodies has to be given to the cooperative of traditional fishers. It is their first use right that will revive small fish,” says Om Prakash Rawat of Vikalp, a non-profit based in Madhya Pradesh’s Tikamgarh district.

Vikalp’s campaign to hand over local water bodies to traditional fishers 15 years ago had resulted in the state government declaring the first such policy in the country. The policy makes leasing affordable to the poor. Tamil Nadu has also allowed fishers equal share in small fish catch from reservoirs. Assam has protected tribal people’s customary right of fishing in water bodies. But these are isolated case. Government needs to bring out a comprehensive policy on small fish, as this is its best opportunity to rescue the aquaculture revolution.