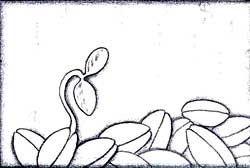 PROPRIETY demands India's participation in the final round of the GATT negotiations on the Dunkel Draft (DD). A multilateral system of trade and technology transfer arrangements has its own set of advantages and India must help in the foundation of an equitable, transparent and efficient mechanism for the future.

A global effort, however, should be made to modify those rigid formulations in the present DD that will hurt the interests of Third World countries. The existing notion that subsidies for Third World agriculture have to be limited to pre-determined arbitrary limits does not take into account that the international price basis of these calculations is extremely shaky.

The argument that India's net agricultural subsidies are less than 10 per cent reflects a mindset that will not be able to protect its interests. As Indian agriculture diversifies itself, particularly in dry land areas, and its soil and water problems in rain-fed areas are resolved, the farmers will switch from low-yielding, mono-crop millet to wider, cropping patterns, including high-yielding cereals, oil seeds, cotton, tobacco and dry land horticulture and forestry. For crops like cotton, tobacco and groundnut, the subsidy given in many areas to the Indian farmer, as measured by the current DD, can be higher than 40 per cent. If the diversification of Indian agriculture to a more sustainable pattern of development is to be maintained, India will have to protect this interest.

The contention that the DD permits small farmers to get special agricultural subsidies is incorrect. The draft only provides for targeted income subsidies to poor farmers not through the commodity route, via price support (check). Also, a large part of the subsidies given, for example, to capital formation in Indian agriculture, for watershed development, tank irrigation, percolation dams and so on, would become a target for scrutiny. In most cases, 25-50 per cent of capital costs are subsidised from plan schemes and this has not been taken into account by those who talk glibly of only irrigation, power, and fertiliser subsidies. India will have to negotiate its freedom to "subsidise" such development, even through the banking system.

In the whole area of genetic diversity and germplasm, we have great strengths, including an elaborate research system and the National Bureau for Plant Genetic Material. Our effort should be to negotiate our interests from a position of strength.

It needs to be noted that the quantities involved in possible agricultural exports, after the GATT round is completed, will be small in relation to Indian production, but the additional income and employment will have substantial effects in some regions and is certainly worth bargaining. Some calculations that are being currently shown around do not take into account that when all countries liberalise, aggregate demand becomes a constraint. A well-known FAO study of a global agricultural system took this aspect into account and came up with the finding that world trade in agricultural commodities would expand by only about 10 per cent quantitatively, while income consequences would be higher. For commodities like rice, oil-seeds and cotton, the present level of world trade involves only a small part of Indian production and DD additions would be limited. The income consequences, however, would be beneficial for some regions, especially the dry zones, and are worth negotiating.