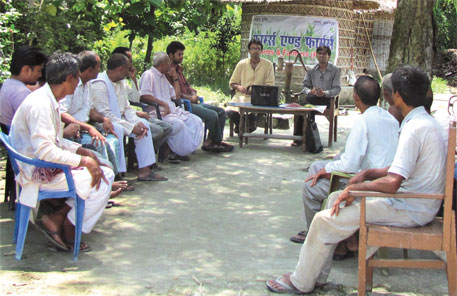 In a shabby godown-turned-office in Vaishali district, Shashank Kumar, an alumnus of prestigious Indian Institute of Technology (IIT), pensively browses through the Internet on his laptop. He is surrounded by a goup of farmers who wait expectantly to know the chances of rain. Kumar finally gives up. He walks out of the office and looks at the partly cloudy sky. “It might rain,” he says, mumbling that weather update in Bihar is awful. His friend, Manish Kumar, another IIT alumnus, is back from a hectic tour of villages in Banka district. Long hours of walking under the sun has made him ill. Yet he joins the discussion on what the group of farmers should grow this season keeping up with the market trend.

Shashank, a statistician, and Manish, a textile engineer, resigned from their plum corporate jobs in 2010 and have since been working with farmers of Vaishali, Muzaffarpur, Banka and Hajipur to turn farming into a profitable venture. “For us, it was a call of land,” say the duo who hail from the same village.

So the profit of their organisation, Farms n Farmers, must be impressive. Mere mention of profit gives them bouts of laughter. “Our balance sheet is negative but things are looking up,” say the entrepreneurs who are in the process of finding out what ails the farming sector in the state. “When we started, we thought a direct market to farmers’ produce in cities and elimination of middlemen would bring them more money. Our concept was far removed from reality,” says Shashank. “We realised the problem lies in the gap between demand and the produce.” Farmers in the hinterlands of Bihar prefer sowing labour-intensive paddy and wheat. They do not grow for the market and have little idea about high-value crops. Then there are obvious problems like small landholdings and reluctance towards new farming techniques.

Amid the gloom, Shashank and Manish decided to persuade young farmers. The idea worked. Young farmers agreed to experiment, though on a small portion of their fields. The duo also told the farmers about storage facilities and packaging and processing techniques so that they can earn higher prices for their produce. Varun Singh is one such farmer from the IITians’ village who grew baby corn on one-tenth of his farmland last year. “Initially, I had to face the wrath of my father,” he says. But the earning from baby corn was impressive. This year Varun’s father has allowed him to grow capsicum, another vegetable in demand in cities, along with baby corn.

His neighbour Ravi Bhusan was startled when he was told about mixed farming. The IITians after a thorough study of his field and market trends asked Bhusan to grow potato along with wheat. He reluctantly followed the advice. A bit of profit in the first year itself surprised him. “My profit would have been much more if I had grown a few more crops,” says Bhusan, who is now improvising methods of mixed farming.

Farm n Farmers segregates the harvested crops into categories of ready to sell, crops that need to be processed and crops that require storage facility. “Farmers usually sell their produce in the local market where they do not get a good price. We find a niche market for each crop and sell it at a better price,” Shasank says. Crops like baby corn are sold processed and canned, and fetch an impressive price, he adds.

Though at a nascent stage, their venture has come to the notice of National Bank for Agriculture and Rural Development, which has offered them access to its farmers’ clubs. This has enabled them to interact with large groups of farmers and understand the problems better. “There is a severe resource and information crunch in Bihar. Weather updates are difficult to get despite 95 per cent of farmers depending on rain,” says Manish. In the next few years, they plan to set up a call centre to advise farmers on crop diseases and right planting schedules. To begin with, they have prepared a database of farmers and send them remiders through SMS about when to buy seeds or irrigation methods.