Because of its political importance in the British empire, Calcutta was one of the first cities to regulate smoke emissions. But legislation failed to keep up with technology and today, the city is one of the most polluted in the world. 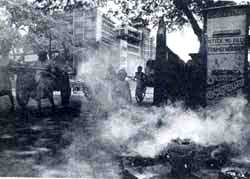 URBAN air pollution in India has become a cause of concern and alarm and the subject of much writing and debate on measures to control it. Calcutta is reputed to be one of the world's most polluted cities, but its citizens contend the pervasive acrid odours and hazy horizons are a recent problem and the city in the past was relatively smokeless.

The pattern of fuel consumption in Calcutta suggests air pollution in the city can be divided into roughly three historical periods, according to researcher M R Anderson. In the period prior to 1855, domestic burning of wood, dung and illuminating vegetable oils was the major source of smoke, even though coal-burning became more in vogue after 1820. The second period, spanning the middle decades of the 19th century, witnessed a large increase in coal smoke augmenting a substratum of biomass emissions. After 1855, the use of coal increased dramatically and in the third period, after 1880, coal smoke from boilers and domestic use fundamentally altered Calcutta's ambient air quality.

Smoke was cited, along with heat, dust, humidity and noisome smells, as one of the health hazards for Europeans in Calcutta in the 18th century. Calcutta was uniquely situated to suffer from air pollution. As a centre for heavy industry, because it was located close to the Bengal coalfields, and with its peculiar topographical and meteorological characteristics, Calcutta's air pollution was intense because smoke could not be dissipated into the surrounding atmospheric sink. Unlike Bombay, Calcutta could not count on winds to dilute smoke, especially between November and March. The city was vulnerable to frequent temperature inversions, which prevented vertical ventilation and trapped smoke in the lower atmosphere. And, like London, Calcutta suffered from recurrent fogs. By the 1870s, major smoke inundations had become a routine feature of Calcutta life.

In general, Calcutta residents complained more about the dark and strong-smelling varieties of smoke even though it was not necessarily more harmful than the less perceptible smoke that contained harmful compounds. Europeans complained about the dung and light biomass that were the popular domestic fuels in Calcutta, but they tolerated wood smoke from domestic fireplaces; Bengalis ignored dung smoke, but frequently complained about industrial coal emissions.

The use of coal increased considerably with the opening in 1855 of the country's first proper railway, linking Calcutta to the Raniganj coalfields. With indigenous coal available to run steam engines, Calcutta became the hub of the Hooghly industrial corridor -- Asia's Ruhr valley -- with a corresponding increase in air pollution. The smoke problem was worsened by the poor quality of Indian coal, which contains from 14.8 per cent to 47 per cent ash by weight and produces more smoke than British coal.

With the smoke problem arousing official concern and anxiety, Calcutta became in 1863 one of the first cities in the world to enact smoke nuisance legislation. A committee formed to investigate the problem in 1879 commissioned Frederick Grover, the Smoke Inspector for Leeds, in 1902 to make recommendations for smoke abatement. Grover's report gave rise to the Bengal Smoke Nuisances Act of 1905, and the subsequent establishment of the Bengal Smoke Nuisances Commission, which implemented a systematic but selective smoke abatement programme throughout the colonial period.

The political urgency of Calcutta's smoke problem was linked closely with the city's role in the British empire. Calcutta was the seat of government until 1911 and the subcontinent's capital until the First World War. Smoke, however, highlighted the two radically different sets of ecological problems in Calcutta -- one, its crowded streets and poor sanitation, which Europeans associated with colonial Asia, and the other, the social disruption and heavy pollution they were familiar with from European industrialisation. The city's dominant European population maintained Calcutta was liveable only because of the exercise of the discipline of scientific control.

Industrial smoke was not a prominent political issue for either imperialists or nationalists, but it was a focus for social conflict as it raised difficult questions about the nature of urban society, industrialisation in India, and the state's responsibilities in the context of environmental degradation. Such axiomatic features of environmental regulation as systematic monitoring, reliance on technical experts, technological remedies, and close collusion between industry and bureaucracy were consolidated under the aegis of the Smoke Nuisances Act. New techniques were introduced for policing industrial labour and disciplining the social practices of the subordinate classes.

Although the Smoke Nuisance Commission had an impact on burning practices and the level of industrial smoke during the late colonial period, its importance is often overemphasized (see chart). The pollution in Calcutta had much to do with changes in population, urban density, and fuel prices. Socially determined burning practices were as important as the introduction of new technologies. By 1950, coal-burning steam engines were becoming obsolete, and the Act was powerless against automobile pollution.

The ability to control smoke emissions had important implications for the way in which Indians experienced industrialisation. Environmental degradation was a ready charge against unpopular technological and economic change. The state acted to head off objections to industrialisation before they mushroomed into serious social protest -- not stopping industrialisation entirely, but merely reining in its worst excesses. The control of smoke provided a subtle way of asserting hegemony over social and productive life. Smoke was omnipresent and few could object to its diminution. As the administrative capacity to regulate smoke expanded, the frontiers of the state made an unobtrusive but significant advance. The "profession of combustion engineering," operating under the cloak of scientific expertise, was able to influence everything from policing to labour relations in Calcutta. Even though the allure of purely technological solutions led to frustration among managers and owners, the decision to treat smoke as a matter for technical regulation rather than public debate was never questioned.

Smoke abatement used the language of scientific administration to make an imperial assertion that given the correct mix of technological investment and administrative organisation, the human environment could be made subject to political control. That smoke regulation relied upon heavy doses of coercion suggests there is perhaps more than a passing affinity between authoritarian forms of governance and successful environmental intervention.

AMIT MITRA wrote this based on The Conquest of Smoke: Legislation and Pollution in Colonial Calcutta by M R Anderson, taken from Nature, Culture and Imperialism: Essays On The Environmental History Of South Asia, edited by David Arnold and Ramachandra Guha, Oxford University Press, Delhi; to be published in 1993. M R Anderson's permission to use his manuscript is gratefully acknowledged.