Emissions are bound to increase. The power sector improves, but others will spew more, especially iron and steel 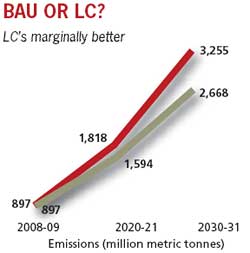 In this scenario too, ghg emissions from the five sectors will grow at a much faster rate than in the power sector.

Low carbon over business as usual

Annual mitigation potential of lc over bau is about 18 per cent in 2030-31—587 million MT CO2e/ annum. This will largely happen because of massively deployed renewable energy technology in the power sector. Cumulative emissions savings, lc over bau, 2008-09 and 2030-31, are about 5,200 mMT CO2e. The highest cumulative ghg emission savings is from the power sector (3,400 mMT), due to the push for renewables.