The finest and longest staple cotton in the world, and part of India's cotton heritage, is on the verge of disappearing 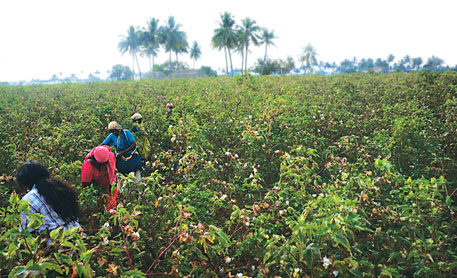 FARMER M RAJAMANIKAM is not very taken by the fact that the cotton crop standing on his farm is considered the “king” of all cotton varieties in the world. He is cultivating it only because he gets an assured price of Rs 10,000 to Rs 11,000 per 100 kg.

“Otherwise, the crop is riddled with problems. It takes 225 days to grow, requires lots of water, its cost of cultivation is very high and yield low, and it faces lots of pest attacks,” Rajamanikam says. He feels that if Appachi Cotton, a cotton ginning company in Pollachi, Tamil Nadu, were to stop its contract farming agreement with him, he would have no reason to continue cultivation.

No wonder that Rajamanikam’s 1.21 hectares (ha) dedicated to Suvin cotton in Salem district’s Manivizudhan village are among just 607 ha in Tamil Nadu as well as India on which this superfine variety is being cultivated. In the 1980s, India was producing around 35,000 to 40,000 bales of Suvin, whereas the current production is just around 1,500 bales. Ironically, this fall in cultivation is not due to a lack of market demand. Suvin is in high demand in Japan, where it has been branded “Suvin Gold”. But then, Suvin is not an isolated case-India’s heritage extra-long-staple (ELS) cottons are all in a state of neglect, with falling acreage and hardly any fresh seed research. “Heritage cotton” varieties are those that are created and maintained by a country or group. Despite being the largest producer of cotton in the world, India produces just about 150,000 bales of ELS cotton, while the rest of the total domestic demand of 900,000 bales is met through imports. 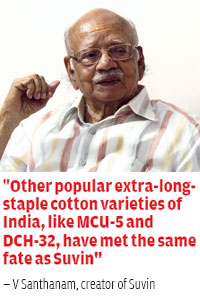 Suvin was created by V Santhanam, a retired cotton breeder from Coimbatore’s Tamil Nadu Agriculture University. He created Suvin by crossing Egyptian cotton variety “Sujata” with “St Vincent” from the West Indies. Released in 1974, Suvin was taken up for commercial multiplication by Coimbatore-based Lakshmi Mills. “Contract farming with a 20 per cent incentive over the best varieties of those times made production shoot to 40,000 to 50,000 bales per annum,” Santhanam says.

The situation began to change with the arrival of “hybrids” on the scene. Suvin too is created by hybridisation. But while its seed can be saved and used again, the hybrids’ seeds have to be created fresh every year. They have higher yields, but the seed is expensive and input costs are higher.

“Because of the entry of private players, seed production became competitive, and Suvin lost out due to its long duration and low yield. Hybrids began to take over Suvin in the areas where it was traditionally cultivated,” says Santhanam. Lakshmi Mills also lost interest. He says that other popular Indian ELS cotton varieties like MCU-5 and DCH-32 have met the same fate. DCH-32 has not been commercially cultivated since 2007-08. MCU-5 is faring better since the South India Mills Association (SIMA) has been supplying seed for cultivation on 2,000 ha to 4,000 ha. 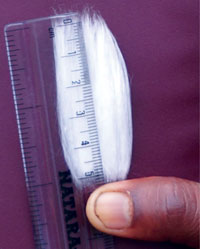 In recent years, the situation has been exacerbated by environmental factors. “Suvin being a Barbadense (ELS species of cotton) derivative, is vulnerable to climate change,” says Vindhya Varman, professor and head of the Department of Cotton, Tamil Nadu Agriculture University. “It needs assured irrigation, and rainfall is getting erratic. The last three years have seen a drought in this region, and this year, there were intense rains in one month. Barbadense is also vulnerable to sucking pests,” he adds. Varman says that other ELS varieties have also been impacted by similar eventualities.

Santhanam says currently there are three sources of Suvin seeds. The Central Institute for Cotton Research ’s Coimbatore station is maintaining pure seed stock. Commercial multiplication is being undertaken by only Appachi Cotton and SIMA.

However, stakeholders think there is need for more research. Mani Chinnaswami, proprietor, Appachi Cotton, says, “There is need for improving heritage genomes, including Suvin, for resistance to new pests, enhanced yield and rainfall irregularities. Also, seed security is itself a huge issue-no agency is addressing this factor at this point.” K L Selvaraju, secretary general, SIMA, says that the association has undertaken some seed improvement efforts. “Now, we have a seed that grows in 170 days and the yield has also been improved from 600-700 kg to 1,000 kg per acre (0.4 ha).” However, he says that commercial production of the new seed is proving to be difficult, and government support is needed in this.

Asha Rani, chief cotton breeder with SIMA, thinks that improving seeds in experimental conditions can be managed by private groups, but propagation is a challenge. “Demonstrations in farmers’ fields, which actually win the confidence of farmers, is an expensive affair, and government support is urgently needed, otherwise the improvement effort is wasted.” 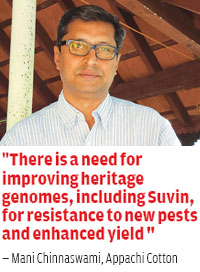 Varman says that similar bottlenecks in the system make research difficult. “ELS cottons are very much on our agenda but improved varieties have to be approved by the State Committee for Variety Release and when the committee asks what chances there are for these varieties catching on, we have no answer.” Chinnaswami agrees that this is the case but rues the fact that there is no communication between industry and universities on the direction of research. “The ginning industry is crying out for better quality fibre, but it is not percolating to labs.”

This void is actually helping the private seed sector, which is developing Hirsutum (American cotton species) — Barbadense hybrids to take up the space left by ELS varieties. Mahyco and Rasi are among the companies which have launched such hybrids. “The advantage these hybrids have in the market is the BT gene, which has high acceptability among farmers,” says Varman, “We are at a great disadvantage there because there is no public sector BT gene.” Selvaraju also feels that the craze for BT has impacted his organisation’s ELS seed production.

Selvaraju also holds the absence of a clear-cut policy in this regard responsible for the situation. “Before BT, India had a full range in cotton fibre— spinnability count from 2 to 250, staple lengths from 22 to 39 mm. But since the advent of BT, only long-staple—28 to 30 mm—has become the norm to the exclusion of everything else.”

Both Selvaraju and Chinnaswami say the urgent need is for all stakeholders to come together on one platform if heritage ELS cottons are to be revived. They feel that a separate cotton board on the lines of the silk board and coffee board could help focus attention on India’s heritage cotton genomes, which are under threat.