A village in Kerala, encouraged by its progressive library, leads the way in organ donation 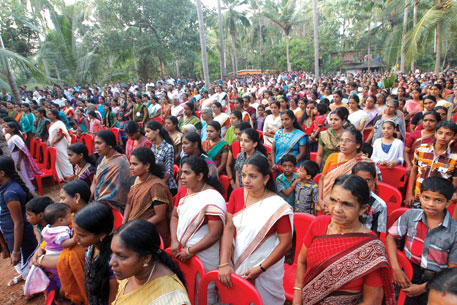 There was an air of festivity and excitement at Cherukulathur village on January 23. In a declaration on an unprecedented scale, all 600 families of the village pledged to donate all organs in case of brain death, and handed over 1,500 letters of consent to the Calicut Government Medical College Hospital. Cherukulathur, 16 kilometres from Kozhikode city in Kerala, thus shot to fame as the village with the highest number of voluntary organ donors in the state.

“Our village has been progressive right from the time of the freedom struggle,” says T P Ramachandran, a seventy-year-old farmer. The village has fought against caste discrimination and authoritarianism of landlords, he adds.

Ten years ago, residents of Cherukulatur pledged to donate their eyes after death. The motivation for such a move came from an unlikely source — the K P Govindankutty Memorial Library, a 45-year old institution. With 10,000 books and more than 500 active members, the library is the cultural heart of the village and has been heading the organ donation campaign for more than two decades.

The idea of an eye donation campaign first struck the library authorities in 1992, after the death of social worker V R Chathukutty Master, who had pledged to donate his eyes. His corneas were used to restore sight to two visually impaired men. “It was a revelation to us,” recalls secretary of the library T M Chandrasekharan. “Many residents were unaware that eyes donated by a person could give vision to two others. We strongly felt that the library must do something for society apart from encouraging people to read,” he says.

The library formed an organising committee and 15 squads of about 10-15 volunteers each. Each squad was to visit and counsel members of 40-50 families of the village, distribute notices and put up banners and posters. “At that time the people’s science movement was also very active in our village,” recalls T V Ambujakshi, a 46-year-old resident. Her father Thekkuveettil Chennan was the second person in the village to donate his eyes with his demise in 1993. Persuading people to pledge their eyes was not easy. People were afraid that the eyes of the deceased would be crudely dug out leaving two empty holes, and disfiguring the face of the deceased. “Volunteers were often posed questions such as ‘what will we do when we go to the other world without our eyes?’,” laughs Chandrasekharan. To address religious concerns and fears, no matter how naive and illogical, the campaigners invited eminent eye specialists and legal experts to interact with residents. By 2003, support for the cause had grown and the library gathered pledges from more than 1,000 residents. “Eye donation has become a social custom in our village,” points out Ambujakshi. “If any family were to violate this practice, it would be looked down upon,” adds K Narayanan, an active campaigner.

So far, 185 visually impaired people in different locations have gained sight thanks to 94 residents of Cherukulathur who donated their eyes after their death. The library has also organised get-togethers for the families of donors and recipients. “This will help make the whole process more intimate,” says Chandrasekharan.

In the event of the death of a donor, the K P Govindankutty Memorial Library contacts two private hospitals — Comtrust Eye Hospital and Malabar Eye Hospital — instead of the nearby Kozhikode government medical college hospital. The cornea of the eye must be retrieved for transplantation within six hours after death of the donor. “Initially, we would intimate the government hospital. The hospital has an eye bank, but it has insufficient vehicles, drivers and funds. On many occasions, the medical team could not reach the village in time,” says Chandrasekharan. The other two private hospitals dispatch their teams immediately, he adds.

According to the campaigners, private hospitals, using advanced equipment and technologies, can perform cornea retrieval within 20 minutes, while the government hospital takes at least 45 minutes. “The family of the deceased would get upset if the surgery took too long, as it would also delay the last rites,” says Narayanan.

There is a desperate need for organ donors in Kerala. Data suggests that annually around 20,000 patients with kidney ailments die for lack of donor organs in the state. The 600-700 kidney transplants that take place in the state use organs retrieved from live donors. On the other hand, around 3,000 victims involved in road accidents every year end up brain dead, and could potentially be organ donors. “When their near ones are declared brain dead, most people do not have the presence of mind to donate the organs of the deceased,” says Chandrasekharan.

A major impediment to coordinated organ donation and transplantation in the state is the lack of a database of organ recipients listed in order of priority. “We are happy that our efforts have given vision to many but we are not sure whether they benefitted the most needy,” says Chandrasekharan. Patients in need of donor organs could be registered the same way unemployed in the state are. A properly maintained data bank will make the process easy and transparent, he says.

Encouraged by the success of the first campaign, the library initiated another in 2011 to encourage people to pledge all their organs. The campaigners collected more than 1,500 letters of consent. Ten volunteers pledged their bodies to medicine. “I had already given consent to donate my eyes. Then why shouldn’t I give my body? It doesn’t make any difference after my death,” says 78-year-old Devaki Amma, Chandrasekharan’s mother.

Cherukulathur’s campaigns have inspired similar initiatives in other villages. The residents of the village claim they find this far more gratifying than the media attention and public appreciation they have received. However, K P Govindankutty Memorial Library, one of over 5,000 libraries affiliated to the state council, has not received any acknowledgement of its pioneering activities from the council.

The villagers of Cherukulathur are proud of their collective efforts towards encouraging organ donation in spite of their strong political divisions. An autorickshaw driver, P Chandran, claims, “When it comes to working for a common cause like this, we keep all our differences aside.”