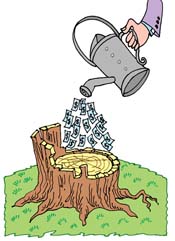 Asset managers are trying to take environmental and social issues into consideration when selecting companies to invest in. Mutual fund managers were originally bound by law in the us and in Europe to invest in what will bring the highest return. However, as consumer consciousness started changing, mutual funds have been pushed to review their priorities.

In 2000, the uk government introduced a law requiring pension funds to disclose how they incorporate social responsibility aspects into their investment strategies, if at all. Consequently, rather than seeking short-term high returns, pension fund managers across the uk have been increasingly investing in what they believe will, by being sustainable, yield high returns in the long term.Similarly, the Norwegian parliament passed a law in 2005 requiring that the state pension fund (formerly the petroleum fund, in which the country pooled its oil profits), would only invest in sustainable and environmentally friendly companies across the world.

More recently, the Indian division of abn amro Bank launched a Sustainable Development Fund, a close-ended equity mutual fund; icici Bank announced a Rs100-crore fund to finance 'green' small and medium enterprises; and financial research firm crisil is drawing up an environment social and governance (esg) index for the Bombay Stock Exchange, to be launched at the end of the year. International institutions such as the World Bank and the United States Agency for International Development (usaid) are also promoting 'sustainable' initiatives in India. crisil's esg, for instance, is receiving funds from the International Finance Corporation, a part of the World Bank, which promotes private sector investments in developing economies.

But the problem is that there is still no clear definition of 'green' in finance. The credibility of and returns from 'green' investments are also held suspect.
The point is whether or not sustainability indices can bridge the credibility gap. Foremost among the indices is the Dow Sustainability Index (dsi) set up in 1999. But its rankings often appear suspect because the index currently rates companies on the basis of self-reported social, environmental and corporate governance policies. Companies, in a way, pay to get listed on dsi. An independent consultant is hired to review a company's corporate reports. Smaller companies do not make the grade because they lack reporting infrastructure. Being listed on the index becomes a public relations exercise, a way to validate ones green and ethical credentials to consumers.

In India, crisil is assessing the sustainability of companies in the s&p cnx500 --the top 500 companies on the Bombay Stock Exchange--by using a method similar to that used by Dow. The companies, for the most part in the non-renewable sector, such as mining, coal or steel, are ranked according to two criteria impact on the environment and communities; and corporate governance, such as labour policies. "To correct the industry bias, each company is rated within its sector before being compared with other sectors," says Sunil Sinha, senior economist at crisil.

News reports about companies' environment, social and corporate governance performance are scrutinised. A questionnaire is then sent to companies, inviting them to comment on their environmental and social policies. Interestingly, such self-reported information is not independently verified by crisil, making it difficult to judge the objectivity of the esg index.

When abn amro adopted crisil's methodology to assess companies for their development fund, it imbibed certain inherent weaknesses of the method. For instance, the fund's third largest portfolio is in Reliance Industries, the largest industrial conglomerate in India. Reliance Industries' core activity is in petrochemicals and it is a company not exactly renowned for its social and environmental commitments.

ngos and corporate responsibility lobbies such as the Business & Community (b&c) Foundation or Greenpeace also compile their own rankings of companies. The b&c Foundation adopts a consumer approach, ranking companies according to the nature of the complaints they generate from consumers. Greenpeace, which now ranks Indian information-technology companies according to policies on e-waste, asks companies to publicly reveal their policy towards e-waste and the availability of less toxic products in their computers. 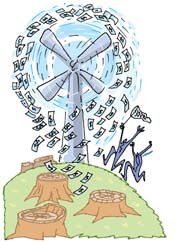 Its latest project, New Ventures India, encourages investments for innovation among small and medium enterprises in the 'green business' sector. Set up by the World Resource Institute for the Confederation of Indian Industry with some financial support from usaid, the project is going to town with the scheme, selecting small and medium enterprises through road shows, on-site training in their green business centre in Hyderabad and other outreach programmes.

Ten such enterprises were showcased last year at an investor forum, including bk Innovations, manufacturers of edible cutlery; abt Bio-products, a bio-fertiliser producer; hmx Sumaya, which makes 'green' air conditioners; and Natura Fibertech, which makes alternative construction materials from coconut coir. Madhav Kamath, task leader of New Ventures, is excited by the variety and scope of these companies, and thinks some of them could go public. "India can become a green business hub," he adds.

Narayana Peesapaty, managing director of bk Innovations, is glad about the increased visibility his company has got through New Ventures. According to Peesapaty, axis Bank and Kannada Bank were keen to dish out loans, but he prefers private equity investment to loans and continues to wait for suitable investors. "It used to be very difficult to find funding earlier," says A Vaidyanathan, head of hmx Sumaya, before being spotted by New Ventures. When the project was launched in 2005, only three investors had shown interest; today, there are about 40, and more than 155 companies have signed up for New Ventures India's investor's forum to be held in Mumbai in November.

It was in one of the project's forums that Nachiket Mor, deputy managing director of icici Bank, announced that the bank was setting up a Rs 100 crore fund for lending exclusively to environment-friendly Indian small and medium enterprises.In partnership with New Ventures, it is screening potential candidates for short- to medium-term loans ranging between Rs 5 lakh and Rs 40 lakh. Loans will carry an extended moratorium period and attract lower interest rates for those involved in green business.

Padmanaban sees the initiative as a natural progression for icici, which in its earlier role was a development financial institution financing Indian businesses. Jaisingh Dhumal, chief manager of icici Technology Finance Group, says that since 2001 his department has funded 50-100 companies involved in anything 'green', from clean energy to waste management. For Dhumal, energy efficiency directly translates into profits for companies. icici is also considering using carbon credits as security for loans in future. All the more because carbon credit trading is picking up speed as Indian and international banks like hsbc, abn amro, icici and sbi, to name a few, are setting up infrastructure for carbon credit trading.


For these banks although there is money to be made in green businesses, the question whether green indices can influence investment choices remains. abn amro's sustainable development fund attracted only a few investors in the highly competitive Rs 4,87,000 crore mutual funds space in India. The fund accumulated Rs 62.84 crore, considered small among mutual funds whose assets can reach Rs 4,000 crore. Clearly, the mutual funds market is not ready for sustainable investment ideas yet.

"There is a herd mentality among mutual fund managers, who follow the ones doing well," says Sinha from crisil. Similarly, Shashi Khan Bahl from Franklin Templeton India recommends leaving values aside when making investment choices--financial advisors look for the highest, risk-adjusted returns, never mind the green credentials of the business.

Even in developed economies, good ethics don't necessarily equate with good returns. Early research by Geneva-based Covalence, a company that tracks the ethical reputation of multinationals, shows little correlation between stock value and ethical value. Among a hundred companies Covalence tracked in 2006, 80 were not affected in the stock market by their ethical quote, 10 saw a positive correlation (including Toyota launching its hybrid model), while 10 saw a negative correlation. Downsizing often leads to a rise in stock value, for instance.


Also, the definition of 'green' in the financial sector remains opaque and needs more transparency before it can pretend to sustainability. "All companies are green, but some companies are 'more green' than others," writes Duncan Stewart, director at Deloitte Canada Research, saying a company's policy dictates how 'green' it is, relative to others. Green and sustainable investment can mean very different things--investing in companies that do green business, such as solar energy and organic manure or in companies relatively 'more green' than their counterparts, or simply funding companies to become less polluting and more energy efficient.

unep fi, a global partnership between United Nations Environment Programme and the financial sector to understand the impacts of environmental and social considerations on financial performance, defines sustainable investments as investing in carbon-neutral companies.

Bigger companies find it easier to become carbon neutral as they outsource the hazardous and highly polluting work. Often escaping regulations and operating in a state of semi-legality, small and medium enterprises often do the carbon-intensive work for bigger companies (see 'Small is not beautiful', Down to Earth, October 2002). For instance, textile industries tend to outsource heavily polluting process of dyeing while pharmaceutical companies outsource the hazardous process of separating the solvents from the pills. Making these processes less polluting and sustainable requires further more investment.

Going green is often expensive, since substantial investments are often necessary to achieve energy efficiency and waste management. A 'greener' fund may well be one that helps polluting small and medium enterprises become more green.