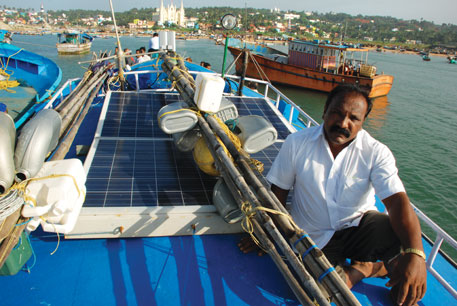 Little Flower doesn’t look different when viewed from outside. Even the interior of this fishing boat is not different from others, anchored nearby. It has a diesel engine, a wheelhouse, a cabin for storing fish, fishing tools, modern gadgets like GPS, sonar fish finder, wireless set, and of course, a television, a grinder and a dozen of CFL bulbs. “Please have a look there,” insists M Sahayaraj, proud owner of the boat, pointing at the rooftop of the wheelhouse. The rooftop is fitted with four solar panels. “These panels help me save a good amount on diesel and get a good catch,” Sahayaraj says with a wide smile on his tanned face.

Sahayaraj lives in Thoothoor, a small fishing village along the western coast of Tamil Nadu’s Kanyakumari district. Thoothoor fishers are traditional shark hunters. “They are adventurous and enterprising,” says J Vincent Jain, chief executive officer of the Association of Deep Sea Going Artisanal Fishermen, a non-profit in Thoothoor. “More than that, they are innovative,” Jain says. Praise the Lord is another boat in the village that runs its gadgets on solar power. Jain says Thoothoor’s fishers are probably the first ones in the country to use solar energy in commercial fishing boats.

Losses, the mother of innovation

Over the past few decades, artisanal fishers of Thoothoor have shifted to boats fitted with diesel engines and other modern equipment, leaving behind their traditional rowing boats and rafts. Now there are about 500 diesel-powered fishing boats in the village. These boats are capable of venturing up to 400 nautical miles into the sea and have enabled Thoothoor’s fishers to fish across the country’s two million square kilometres of territorial waters, called the Exclusive Economic Zone.

“We stay in the deep sea for 30 to 40 days if we find out a good fishing ground,” says Sahayaraj. “Each boat employs 10 to 15 people. So we have to carry everything along with us—food, water, diesel and ice blocks—to last for more than a month.”

“We carry about 10,000 litres of water, 7,000 litres of diesel and 800 blocks (one block weighs about 40 kg) of ice along with us,” says A Sil Verian, another fisher from Thoothoor. “A month-long fishing trip costs us about Rs 5 lakh. Diesel accounts for a major part of the expense, say about 70 per cent.”

One of the reasons for such high fuel consumption is that most boat owners buy used truck engines to save money. Besides, though engines can be turned off while fishing, fishers run it continuously to avoid restarting troubles and to recharge batteries that are the main source of power for lighting the boat and operating navigational and other safety equipment. “The cost of fishing has increased in tandem with diesel prices but the catch remains the same,” points out V Romanse, secretary of the association. As a result, many fishers in Thoothoor are now facing losses and are in the grip of moneylenders.

Heavy losses prompted the community to pool ideas on how to reduce diesel consumption. “Cutting down fuel was necessary to earn profits from fishing while curbing greenhouse gas emissions from burning of diesel as the gases affect fish stocks,” says Jain. The association organised workshops to create awareness among the community about clean, renewable sources of energy. Many fishers preferred solar energy as an alternative.

“It was a challenge for us,” says Kichu Krishnan, managing director of Sirius Controls. “We had never worked for the fishing sector.”

The problem is, says N Ravisunthar, managing director of Jagath Jothi, not enough research has been done on using solar energy in commercial fishing boats. To begin with, Jagath Jothi fitted solar panels on a small boat. It worked. Solar energy could propel the engine of the one-metre-long boat. But replicating this in big boats was not easy. The companies, however, accepted the challenge.

Jagath Jothi worked on Praise the Lord and Sirius Controls on Little Flower. It took months before the boats could be fitted with solar panels. Four panels each with a capacity of 250 Watts were fitted on the rooftop of the wheelhouse. Together the panels generate about 1 kilowatt, sufficient to light the boat and run the gadgets. “But the power generated is too less to propel the engines of commercial fishing boats,” points out Ravisunthar. The cost of fitting solar panels, control board and wiring on Little Flower, which is a bigger boat, was Rs 3.75 lakh. Sirus Controls did it for free. For Praise the Lord, the cost was Rs 1.80 lakh. “Jagath Jothi offered us a discount of Rs 60,000,” says Jain.

Powered with solar panels, Praise the Lord was the first boat to venture into the sea in November last year. Its experimental voyage lasted for five days. “Our boat was fully lighted. Fishers in other boats gave us a strange look because of this unusual brightness,” says S Theoclose, owner of Praise the Lord. “Usually, fishers use dim light to avoid frequent recharging of batteries. But with solar panels, we could use tube lights and LED lights and keep them on throughout the night. The panels helped us save about 150 litres of diesel, worth Rs 7,650,” says Theoclose.

Little Flower made the second experimental voyage, which lasted for nine days. “We use lights to attract the catch while fishing during nights,” says Sahayaraj. “We caught more fish than other fishers because our lights were brighter.”

Workers say they used to cut their fingers while removing fish from the hooks because of dim lights. Now removing fish has become safer and easier. Solar panels power all equipment in Little Flower, which include 11 CFL lights, five tube lights, four focus lights, a GPS, a sonar fish finder and two wireless sets. Sahayaraj says the panels work even on cloudy days.

Profits earned by Sahayaraj and Theoclose have prompted other fishers in Thoothoor to install solar panels on their boats. But the association is short of funds. “NABARD (National Bank for Agriculture and Rural Development) has agreed to provide us Rs 7.88 lakh for the work,” says Jain. But just installing solar panels to light the boat and run other equipment is not enough. Jain says the next step is to make engines run on solar energy. This requires more solar panels. This is not only expensive, using so many solar panels on a boat may offset its balance.

“A lot of research is required for developing new designs for boats as well as the right kind of panels and the way they are fitted on the roof,” says Krishnan. But neither the Centre nor the state government has schemes to address these concerns.