A food for generations the world over, an algae comes as a boon for Tamil Nadu's farmers 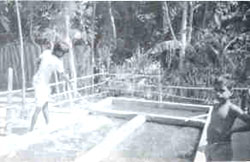 THE first thing one notices about Pudupattinam, a small fishing village 60 km from Madras, are the round cemented tanks scattered amidst the mud huts, filled with some murky green liquid. Khajibai, 45, a fisherwoman, explains what they are: "These tanks are my very life. This is where I grow Spirulina." Khajibai, along with women from 10 other villages across Tamil Nadu, is among the first smallscale manufacturers of Spirulina fusiformis in the world.

Spirulina is a slimy blue-green algae found floating in waterbodies in colonies of spiral shaped cell-chains resembling scum. It has for centuries been a food in various parts of the world. In India, the technique for cultivating this algae was developed by the A M M Murugappa Chettiar Research Centre (MCRC), a Madras-based private research organisation, which in 1984 set up the country's first, and so far only the commercial plant with a capacity to grow and process 7.5 tonnes of Spirulina fusiformis annually.

C V Seshadri, scientist emeritus at the mcrc, says, "Spirulina contains 60 per cent protein. Dals (pulses) have only 20-40 per cent. As land value increases, dals will become more and more expensive. Spirulina is a cheap source of proteins. It can be cultivated even in the backyards. All it needs is water."

Spirulina is also an excellent source of vitamin a, minerals and essential amino acids. In 1991, the MCRC conducted the world's single largest feeding trials with Spirulina, feeding the algae's preparations to 5,000 pre-school children. Subsequent medical surveys revealed that the children had shown remarkable improvements in vitamin a-related ailments. A daily intake of 2 gm (dry weight) of Spirulina is recommended as a nutritional supplement, especially for children and elderly people.

Chemencheri is a small fishing village 20 km from Madras. Food here is often in short supply during April and May -- the lean fishing season. Says 38-year-old C J Vedavalli, a mother of 3 children, "We used to sleep in dark corners of the house to conserve what little energy we had." In 1990, the MCRC, along with the Guild of Service (GS), a Madras-based social service organisation, trained 5 women from Chemencheri to grow Spirulina with the aim of providing them the much-needed nutrition, as well as additional income. As interest in the project grew and spread, an additional 50 women were imparted training by the GS. The surplus produce over their family consumption was bought by Natarajan Sundaram of the GS, an entrepreneur who markets the algae in tablet and capsule forms.

But in October 1991 the algae tanks had to be removed from Chemencheri. Vedavalli explains what went wrong: "It was jealousy," she says laconically, and then elaborates, "We were able to earn about Rs 600 a month. We could feed our children with Spirulina jam, or Spirulina chutney. So those who were not growing Spirulina said their children were falling ill because of it."

The tanks from Chemencheri were then shifted to the nearby Sholinganallur village. From then on, there was no looking back. The algae-growing technology is now being used, with minor variations, by many Tamil Nadu villagers.

Spirulina came to Sadirangapattinam, 45 km from Madras, towards the end of 1992. Thirteen women cultivate the algae here, each looking after 5 tanks. Inside the village community hall hangs the certificate of registration of the Shyamala Magalir Sangam, a women's organisation. Lakshmi, a 42-year-old widow and secretary of the Sangam, said, "We were trained by the GS. But everything was initially managed by another organisation. They bought our chemicals and also marketed our products for us. Then, the organisation's representative went abroad, and we were left with no one to turn to. We did not want to stop growing Spirulina. So we formed the Sangam. Now, we are not dependent on anyone else and can do as we please."

At Andaneri, 8 km from Madurai, the women have set up their own marketing mechanism. Dried and powdered Spirulina is sold in the village itself in packets of 10 gm, each costing Rs 4.

The MCRC's pilot commercial plant is situated at Saveriyarpuram, 80 km from Pudukottai. Twelve families here belonging to the Parayan caste, scavengers by profession, have been cultivating Spirulina since 1992, with the mcrc's guidance. It is a project funded by the Department of Biotechnology (DBT). The MCRC has provided each family with a large rectangular 3,000-litre capacity tank. The MCRC's plant nearby buys the produce at Rs 6 per kg of fresh algae, which is equivalent to Rs 60 per kg of its dried weight. The chemicals are supplied free of cost by the MCRC.

Some families have been given a 2nd tank on request. Kadappan's is one of them. "I made 8 kg from each tank this week -- that's Rs 50," says he enthusiastically, adding, "It all depends on the effort you put in. Stir more and you get more."

Vedavalli, now a trainer with the GS, rattles off the chemicals required for growing Spirulina: sodium bicarbonate, sodium nitrate, sodium chloride and potassium phosphate. "The algae is ready for harvesting after a week, provided you have been stirring regularly and the dilutions are correct," she says. "The algae have to breathe and get enough light to grow, you see, just like other plants." Each kilogram needs chemicals worth about Rs 150 to produce, and is sold at Rs 350 per kg. Says Khajibai from Pudupattinam, "It's not much, but I keep aside whatever I earn for emergencies. Now I don't have to borrow from anyone."

But N Jeejibai, senior scientist at the MCRC and an algologist, is a little worried. "I personally don't advocate this mass propagation by the GS," she says. "It is essential to have an institution with technical expertise as a guiding consultancy. Sometimes, there may be contaminations by other algae, decreasing the Spirulina yield. If that happens, neither the gs nor Vedavalli will be able to handle it." According to Jeejibai, the MCRC staff regularly monitor the algae at Saveriyarpuram. "In the absence of monitoring, however, I would not advise consumption of Spirulina," she says.

The MCRC has applied to the National Research and Development Council for a patent for processing Spirulina. Does this mean that scores of women engaged in this occupation might soon have to stop their private cultivations? "We hope that that situation won't arise," says Seshadri. "The patent is for largescale processing." The organisation is now in the process of setting up the infrastructure for Spirulina cultivation by women in earthquake-affected Latur, in a DBT-sponsored project. At Latur, it is envisaged that the women will be able to manage the affairs efficiently, with the MCRC functioning only as consultants.

In the meantime, the Pudupattinam women have found a novel use for Spirulina. Says a young and glowing Monica Raja, "I apply it on my face everyday. It's very good for pimples!"