Pollution by public sector units has created a dearth water in Orissa's Anugul-Talcher industrial belt. However, little has been done to rectify the situation. 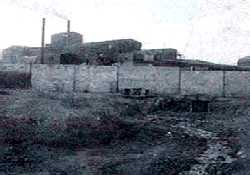 THE ANUGUL-Talcher industrial belt in Orissa's Dhenkanal district -- one of the few water-rich areas in the state -- is facing an acute crisis: People in more than 400 villages in the region, which is served by the Brahmani river and its tributary Nandira, have been bearing the brunt of a potable water scarcity.

Industrial effluents have so heavily polluted the Nandira that the state pollution control board (SPCB) says, the river acts almost like "an industrial drain". The water "is totally unfit for any domestic purpose like drinking, bathing or cooking". The Nandira releases the effluents into the Brahmani, which is itself polluted by discharges from the seven mines of the Mahanadi Coalfields Ltd (MCL). The SPCB, which has monitored the quality of the Brahmani for more than six years, says the level of suspended solids in the river is high throughout the year and more so during the monsoon.

However, little has been done to rectify the situation. An SPCB report on the area's environmental degradation has been under wraps for more than four years. SPCB officials maintain the report is confidential and chairperson C R Mohapatra says the central pollution control board has barred the state board from releasing information from the report. This has only let the pollution continue unabated, prolonging the suffering of the people.

At the root of the problem are four public sector units -- the National Aluminium Co Ltd (NALCO), the Talcher Thermal Power Station (TTPS), the Fertiliser Corp of India (FCI) and the Orissa Chemicals Ltd (ORICHEM). These units draw about 250 million litres of water a day and spew into the Nandira thousands of gallons of waste water containing ash, oil, heavy metals, ammonia, fluoride, phosphorous, sulphuric acid and chromic acid.

Of these, ash is the major pollutant. According to the SPCB, of the 8,000 tonnes of flyash released daily by TTPS and the captive power plants in the area, 475 tonnes are released into the Nandira. Approximately 2,500 tonnes of the total flyash produced goes directly into the atmosphere and most of it settles on open water sources. The rest is dumped into ash ponds in the form of slurry.

However, most of the ash ponds are grossly inadequate and slurry often overflows. TTPS has a 15-ha ash pond, though a 291.6-ha pond is required. Till July 1989, it discharged slurry directly into the Nandira.

FCI also does not have enough land to dispose of flyash. Though it has several ponds for collecting suspended solids, the ash content of the effluent remains very high, according to the SPCB. Besides, FCI releases 20,000 cubic metres of methanol, oil, grease and suspended solids into the Nandira everyday.

Since its inception in 1983, ORICHEM has been haphazardly depositing outside the factory vast quantities of solid waste heavily contaminated with highly toxic substances. These, along with the chromic acid and the sulphuric acid, ultimately reach the Brahmani via the Nandira.

NALCO's 330-ha ash pond, supposedly a "zero-discharge pond", has also filled up prematurely. Consequently, slurry is released into the Nandira. The plant's waste water, containing suspended solids, oil, and chemicals, also flows into the river. Besides, domestic sewage from the NALCO township is diverted into the nearby fields, from where it eventually finds its way into the river.


Another problem faced by villages close to NALCO's smelter plant is the contamination of ground and surface water by fluoride released from the plant. According to the SPCB, "an increasing trend" has been seen in fluoride concentration in the area's water ever since the smelter plant was commissioning. In some places, the concentration has exceeded the safety limits for potable water. An analysis of water samples from Kulad and Gadarkhai villages near the smelter, conducted by the Orissa Environmental Society (OES), has also indicated high levels of fluoride.

Besides, the continuous pumping of water for several decades by the MCL mines has caused the groundwater level in the region to fall drastically. As a result, ponds and wells in nearby villages have dried up. Panchanan Behera of Jambubahali village, 15 km from Anugul, says the wells in his village and a drain nearby dried up soon after a colliery was set up in 1962. Repeated appeals to the authorities brought no relief and only in 1989, after several rallies and demonstrations by the villagers, did the MCL agree to supply water to the village twice a day.

MCL has also built water tanks at some places, but they are uncovered and the water in them becomes unfit for drinking. Besides, the villagers allege the water is often loaded with coal dust and flyash. However, the dearth of potable water in the area forces the villagers to use this water.

Some villages are worse off. Balanda has no source of potable water. After its tubewells dried up, the villagers used water from the collieries that collected in a small ditch. But even this has been diverted by MCL. Bhagabata Pradhan of the village says complaints to the administration have not helped. "The district magistrate comes and goes and nothing happens," he says.

In many villages, the public sector units had promised to compensate for the ponds and wells they took over. These pledges have not been fulfilled. In Kulad, 10 ponds were given to NALCO for its smelter plant. In return, NALCO was to establish alternative water sources as well as public utility facilities such as roads, grazing land and a cremation ground, according to Harmohan Singh, sarpanch of the Kulad panchayat.

However, NALCO denies having made any such commitment. A senior executive of the company says though it cannot provide alternative water sources in all the 39 villages where it acquired land, it is willing to fund water supply projects taken up by the public health engineering department.

The absence of a holistic approach in the management of the water resources and the provision of drinking water in the area has affected the health of the people and the cattle. The incidence of skin infections is increasing in the villages outside the NALCO plant as a result of fluoride pollution. Of late, there is an increasing trend of teeth and gum diseases, swelling of joints and weakening of limbs -- all symptoms of fluorosis. Says the SPCB report, "Fluoride contamination may be the cause of the high incidence of these diseases in Anugul." The report acknowledges that the increase in the incidence of skin diseases and stomach disorders could be a consequence of the pollution of the Nandira and the Brahmani.


Fluoride contamination has affected cattle more, especially in Gadarkhai village, 1 km from NALCO's smelter plant. An OES study found the birth rate of cattle in the village to be the lowest and death rate to be the highest, as compared to other villages. The villagers say the cattle population has declined from 3,000 to less than 100 in the past 10 years and has affected dairy farming, once their primary occupation.

The level of awareness of the problem is high, because of the efforts of the District Industrial Pollution Control and Citizen's Action Project, launched in by OES in July 1992. Though agitations have been aplenty, a coordinated effort is now required to preserve the region's dwindling water resources. As Sisir Tripathy, coordinator of the project, points out: "The government should at least put its own house in order. If it cannot control its own polluting industries, how can it impose itself on those in the private sector?"