Another monsoon. The season of suffering in India's flood plains. And of blaming upstream people for floods. Is there an end to this 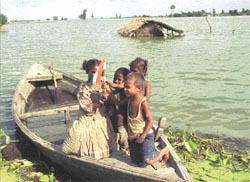 It is a story that the Indian administrative set up has learned to mouth mindlessly every year after floods wreak havoc. All governments in states affected by the recent floods are blaming the respective governments upstream for causing deforestation and not going ahead with dam projects across major rivers.

As usual, it is difficult to judge what is more monumental, the destruction to life and property or the mental poverty of those who govern India. Because for the past ten years, the New Delhi-based Centre for Science and Environment ( cse ) has been screaming itself hoarse trying to dispel environmental myths about flood plains in India, arguing that floods have to be managed in the flood plains and not upstream (see box: Politics of blame ). But first, let's take stock of this year's damage.

At least 588 people are dead, says a status report by the Union ministry of agriculture. But this is clearly an underestimate. At least 11 states have been badly hit. The International Federation of the Red Cross and Red Crescent Societies estimates that 4.5 million people have been rendered homeless.

In Himachal Pradesh, a cloudburst took place and river Sutlej rose 18 metres above danger mark in the span of one hour on August 1, 2000. The entire Sutlej valley, starting from Kinnaur district to Gobind Sagar near Bilaspur, was affected. Media reports say more than 150 people died in Kinnaur, though official reports put the toll at 104. Damage to property is estimated at Rs 1,000 crore. All communication links have been disrupted: around 14 bridges on National Highway 22, six hanging bridges and several roads have been badly hit. An estimated loss of Rs 700 crore is projected for the Nathpa-Jhakri power project. Media reports quoted the chief minister Prem Kumar Dhumal as saying that a flashflood of this magnitude occurs once in 61,000 years.

In northern Bihar, at least 48 people have died, and 3.5 million people in more than 100 villages have been affected, besides the damage to croplands and property. At least 13 people have died in West Bengal. In Assam, the death toll is reported to be 90, though government figures mention only 31 deaths. Floods have devastated 17 of the 23 districts, rendering homeless more than three million people. Thousands remain stranded on national highways, while several others wait on elevated slopes for the waters to recede. Many are yet to return from the makeshift camps, though they may not have much to return to. Media reports say about 4,500 villages have been totally submerged. Assam's minister for flood control, Pramod Gogoi, points out that the river Brahmaputra and its tributaries have caused major breaches in embankments at 54 points. The damage: Rs 300 crore.

The nightmare, however, is yet to set in. Already, there are widespread reports of dysentery. Experts warn that the receding floodwaters will turn to marshes, creating ideal situation for mosquitoes to breed. Nobin Mohanta of Assam's anti-malaria cell says malaria outbreak is not ruled out since the region is contaminated with filth and slush. The Red Cross warns of outbreaks of waterborne diseases like cholera, malaria, gastro-enteritis. Assam's meteorological department predicts more rainy days. The chief minister, Prafulla Kumar Mohanta stated that the government has left no stone unturned in obtaining relief funds. About Rs 3.5 crore has been sanctioned as gratuitous fund and Rs 31.42 crore from the Calamity Relief Fund for the current year.

It is worth mentioning that floods take the highest toll among all kinds of natural disasters in the world. The highest incidence is in Asia: between 1990 and 1999, as many as 351 disasters struck Asia, killing 55,916 and affecting more than one million.


Minister Gogoi said the three flash floods that struck Assam resulted from large- scale deforestation and other human activities taking place upstream in Arunachal Pradesh and Bhutan. He is of the opinion that the first incidence of flood was due to a natural dam burst in the upper reaches of the Siang in Arunachal Pradesh, the most important tributary of the Brahmaputra. Arunachal Pradesh, too, is not short of accusations. Chief minister Mukut Muthi says a dam burst in China is the reason for the recent floods in the state, which had killed 26 with 2,000 people reported as missing by the first week of July. In Bihar, governments have traditionally blamed Nepal for the annual destruction caused by floods.

The case is no different in Himachal Pradesh. A report published on August 7 in the Chandigarh edition of The Tribune said that "the initial reports blamed the floods on cloudburst but experts do not favour this possibility now. "The reports laid the blame on water flowing in from Tibet on early July 31 or the possibility of a cloudburst in Tibet. The chief minister has urged the Union minister for external affairs, Jaswant Singh, to take up the issue with China and implement all scientific facilities available in order to avoid further calamities.

In 1991, cse came out with Floods, Flood Plains and Environmental Myths , the third report of the State of India's Environment series. Based on extensive research and reportage from the Himalayan region, the book had argued that floods are nothing new: the Ganga basin has been seeing floods for the past 3,500 years. That deforestation causes floods is a recent concept, it had argued. The report also stated that "afforestation in the Himalaya does not prevent major floods in the Indo-Gangetic plains," pointing to the fact that there are no proper studies to prove that afforestation prevents major floods.

It is clear that as long as governments keep blaming upstream people and continue favouring only engineering responses to contain damage from floods, there will be no end to the woes of people in the plains every monsoon. Ultimately, people of India's flood plains have to learn to live with floods.