Springing back to life

Springing back to life 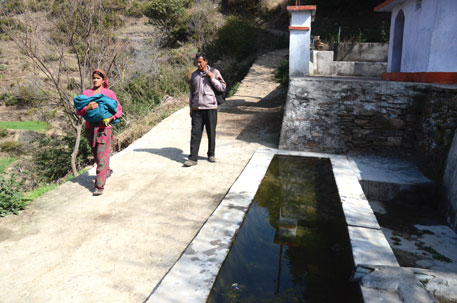 Bhadyun and Beduli are two sleepy hamlets in Ramgarh in Nainital district of Uttarakhand. For centuries, the two villages had an informal agreement to share the water sources in their area—underground springs or naulas. But large-scale deforestation in the past few decades led to the drying up of the springs, which were the only source of water for the people. The situation worsened with the arrival of the new millennium. The centuries-old relationship between the villages strained and people started to migrate.

The Central Himalayan Rural Action Group (CHIRAG), a local non-profit working in Uttarakhand since the 1980s, had been trying for many years to reconcile the two villages. Its efforts bore fruit in 2009. Reconciliation was in the form of a community initiative to rejuvenate the springs so that sufficient water is available to each household in both the villages. At a modest cost of Rs 53,300 the people learnt how to restore the springs by understanding the local geology, ending years of hostility.

Bhadyun and Beduli’s example has inspired other villages in the Kumaon region to revive dead springs. CHIRAG was approached by several gram panchayats facing similar water issues, leading the organisation to start the Kumaon Spring Recharge Programme for 200 springs in that region.

According to the detailed treatment plan prepared by CHIRAG for Bhadyun’s Spring Recharge Programme, the village had three naulas or seepage-based springs along its border with Beduli, including a perennial stream that ran through the village. About 80 to 100 years ago, the villages entered into an agreement to share the water of the springs after the elders of Bhadyun decided that water from the perennial stream was enough to meet Bhadyun’s water needs. The water from the other two springs was left for use by Beduli’s people. Since there were four main castes in each village, four separate structures were built around the springs. These structures comprise a tank with taps where spring water is collected, along with a separate open tank for animals.

The system of water-sharing went well for decades as there was mutual agreement between the two villages. But gradually the springs began to dry up and in 2005, both the villages experienced acute water shortage as the springs went completely dry. Ganga Joshi, a member of CHIRAG who has been working in the two villages since the 1990s, says the springs died because of deforestation. Bhupal Singh Negi, sarpanch from Bhadyun, agrees and says that large-scale deforestation for commercial purpose was taking place when the springs were drying up.

Because of the water scarcity, Bhadyun decided to restrict water access to Beduli by claiming the springs as its own and locking the tanks at the mouth of each spring. This infuriated the people of Beduli as it was their ancestors—the hurikiyas or drummers who were also skilled in masonry—who had built the tanks, says Negi.

“About 30-35 years ago, we had sufficient water which was equally shared by people of all castes. When the water crisis started in 2000, people from Bhadyun objected to the hurikiyas, a Scheduled Caste, using the tank water,” he adds. To prevent them, Bhadyun’s residents decided to lock up the tanks during the lean months, which last from March to June.

“We avoided going to Bhadyun despite shortage of water in our village because they locked up the tanks,” says Santosh Singh, a panchayat member from Beduli. There was another spring on the other side of the mountain. Left with no choice, the people of Beduli had to trek three to four kilometres every day to fetch water. But the lean season did not spare anyone. Both Bhadyun and Beduli faced water paucity as eventually all the springs in the region dried up.

The other nearest source of water was the Kosi river, which is five kilometres from Bhadyun. “Every day during the dry months, we had to take the cattle to the river. Our girls could not attend school as they had to fetch water along with their mothers. Because of these problems, people slowly started moving out of the villages. Agriculture suffered too,” says Singh, pointing to vacant houses in his village.

According to Negi, indiscriminate felling of the baanj (oak) and deodar (Himalayan cedar) trees, which served as catchment for the spring water, aggravated the water crisis. A fully grown oak can retain seven litres of surface water, adds Joshi, who spearheads the Baanj Bachao Andolan to save the oak. 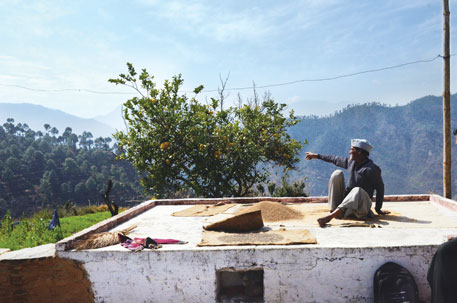 Rajesh Thadani, director, CHIRAG, says that since the colonial times, pine trees have invaded Himalayan forests inhibiting the growth of other species such as oak, deodar and acacia, which have better water-retaining capacity. Pine trees do not allow seepage of water into the soil. Moreover, pine needles cannot be used as fodder for the cattle. In 2006, CHIRAG sought the expertise of Pune-based Advanced Centre for Water Resources Development and Management (ACWADAM), with funding from the Alstom Foundation in France, to understand the hydrogeology of the area to rejuvenate the springs.

In 2007, a team of experts from ACWADAM visited the villages to map the sources of water and see how they could be revived. CHIRAG was already working with the village communities in areas of forest management, education and fodder management. Its members started facing problems as the water conflict between the two villages became a hindrance in pursuing developmental activities. Education of girls suffered the most, while better forest management practices could not be undertaken as people started felling trees indiscriminately. Solving the water crisis, thus, became its fundamental task. “We needed to understand how the springs worked, what could be done to tap more groundwater,” says Thadani, recalling the initial days of the Spring Recharge Programme. ACWADAM’s involvement opened a new world of possibilities to the people in terms of training and learning how to revive the springs.

For both ACWADAM and CHIRAG, the daunting task was to bring the learnings of a complex field like hydrogeology to the people in Bhadyun and Beduli. However, their labour not only proved beneficial to the community, but also turned some of the people into water experts. Girish Budhani of Dina village, two kilometres from Bhadyun, can possibly prepare a guide on hydrogeology for beginners. When CHIRAG sent Budhani and 15 others from this region, including Bhadyun, to Pune in 2007 to understand watershed management, his traditional knowledge on where to dig up khaals, or pits, on the mountain slopes to collect rainwater or where to plan a small check dam for storage proved useful. “Some of the things ACWADAM taught us about watershed management practices were similar to what our ancestors had taught. We never questioned our ancestors’ authority or looked for reasons. But in Pune we found out the logic behind the practice by understanding hydrogeology,” Budhani says.

By late 2007, ACWADAM started mapping the project area to find out the catchment area of the springs and land use. This was followed by marking fractures in the rocks in the catchment area using the global positioning system. The markings helped experts to determine how springs are formed. The mountains around Bhadyun are mostly made up of quartzite and phyllite. While phyllite has a greater degree of permeability, quartzite is hard and almost impermeable. Experts from ACWADAM found that all the springs in and around Bhadyun are fractured springs that cut across layers of permeable and impermeable rocks. Accordingly, percolation pits, check dams and contour trenches were planned along the fractures to help the rainwater percolate down (see ‘Spring recharge project area’). 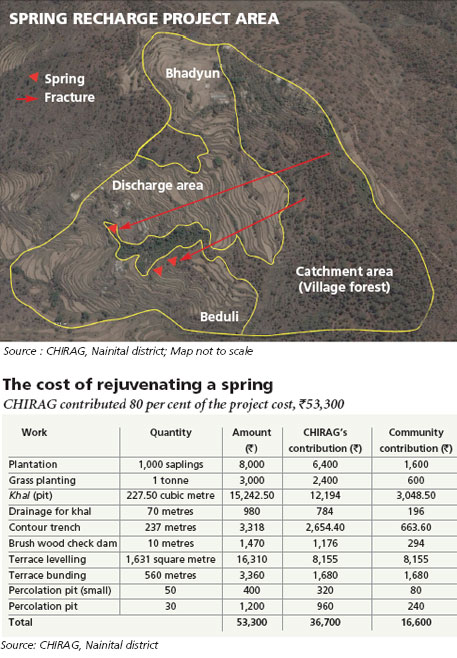 From foes to friends

The people in Bhadyun and Beduli were reluctant to cooperate on the project to revive the springs. While most of the catchment area is under Beduli’s jurisdiction, the springs are located in Bhadyun. “Meetings were held separately with the people in Bhadyun and Beduli. The latter did not agree and instead asked for a separate project. We had to explain to them that the fractures did not extend till their village for the water to flow. The people in Bhadyun realised that if implemented properly, each spring could supply water at the rate of up to four litres per minute,” says Budhani. Beduli only agreed to participate in the project once CHIRAG managed to explain through small-scale models how springs emerge from the fractures.

Against the backdrop of another dry spell in 2009, people of both the villages met in Bhadyun. “Past was forgotten. But to minimise the trust deficit, a written agreement was drafted to ensure that in future the people of Bhadyun and Beduli would share the water sources,” says Negi.

In 2010, residents of both the villages agreed for a community contribution of 20 per cent of the total cost of the project. CHIRAG decided to bear the rest of the cost. The people collected Rs 16,600, while Chirag spent Rs 36,700 to rejuvenate the naulas (see ‘The cost of rejuvenating a spring’). In 2012, CHIRAG handed over the management and maintenance of the springs to the village panchayats.

For the past three summers, the villagers have had a steady supply of water from the springs. Separate tanks for cattle dot the hamlets, while households have sufficient water to meet their domestic requirements.

Women have benefited the most. Earlier, they had to spend more than two hours to collect 15 litres of water, according to ACWADAM. Now women from the remotest household have to walk only 15 minutes to fetch the same amount of water. Between 2008 and 2011, CHIRAG treated 46 springs in 34 gram panchayats in Nainital and Ramgarh. The organisation has also extended its Spring Recharge Programme to revive 200 springs across the two districts.