Who will fill the city's depleting aquifers? 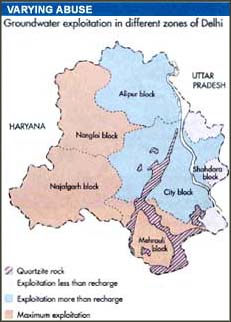 UNDER the present dispensation, the three major water treatment plants at Hyderpur, Chandrawal and Wazirabad get 1410 mld from the Bhakra Nangal dam system and the Yamuna river.

The Bhakra water is carried from the Bhakra main link canal through the Narwana branch. The branch canal carries about 1,775 mld water into the western Yamuna canal at the Munak headworks, located 65 km west of Baghpat in Uttar Pradesh. At Munak, 910 mld water is released through the 65 km-long Munak escape into the Yamuna to regenerate it and feed the 545 mld Wazirabad and the 410 mld Chandrawal treatment plants.

The Delhi parallel branch canal carries about 640 mld water from Munak to the Hyderpur water treatment plant. The unlined stretches of the canal, which is main tained poorly by both Haryana and Delhi, reduce the amount reaching the treatment plant to about 450 m1d, says the Central Water Commission (CWC).

The other major source of water to Delhi, the Upper Ganga canal in Uttar Pradesh, supplies about 450 mld water to the Bhagirathi treatment plant near Shahdara in East Delhi. A pipeline carries the water all the way from Murad Nagar, 26 km away. The necessary boosting hikes up the cost but the loss in transmission is thankfully negligible.

Haryana's bit- which chief minister Bhajan Lal instead was given on humanitarian grounds and was the express cause of the January spat - is 227 m1d, and comes from Haryana's quota of the Yamuna's waters. It is taken to the Hyderpur 11 treatment plant through the western Yamuna canal.

November 17, 1993, broke with the Haryana government tightening this supply to half, on grounds that the state needed the water to fulfill its rabi irrigation needs. Then came the bombshell that the remaining half would be stopped from mid-January onwards.


Delhi griped and its chief minister, Madan Lal Khuraa of the Bhartiya Janata Party, asked Cogress leaders to intercede on behalf of the state of Delhi or face a retaliatory cut in water supply to the "VIP areas". Perhaps the best evidence of the political hoopla surrounding the issue was the alacrity with which the Union ministries of home and water resources jumped into the fray. Media reports, insofar as they could be trusted, said that even Prime Minister P V Narasimha Rao was glued to the altercation.Ordinary folk had their minds on where the threatened abridgement would hit the hardest: "No one in Delhi wants to rent a house without a round-the-clock water supply," says R S Yadav of Mehta Properties, a real estate dealer in South Delhi. "At least for the toilets."

A storage tank is seen as woefully inadequate and more people in affluent as well as hard rock areas like South Delhi are frantically installing booster pumps, which are illegal when connected directly to the municipal mains (boosters that dip into underground storage tanks are allowed). The domino principle behind main- line boosters disrupts the logic of disciplining water supply, says S Prakash, engineer-in-chief of DWSSDU. Even if a single household pulls in water from surrounding lines, others have to add their own. It is no secret that new localities like Vasant Kunj "survive on boosters".

The city's groundwater is going fast. Most of Northwest and South Delhi is virtually impermeable hard rock. The alluvium in Najafgarh block in Northern Delhi has plentiful but brackish aquifers. That leaves New Delhi and East Delhi with potable and easily exploitable groundwater. Except for three tiny pockets east of the Yamuna, the situation fluctuates between disturbing and alarming (see map) as rich farmers and farm- house owners in the hard rock areas ignorantly over- exploit the aquifers that the hard crust prevents from recharging.

Reason enough for a carefully planned policy of groundwater exploitation. Instead, the capital has been stabbed through in the past two unregulated decades with borewells and tubewells -about 50 in the past year alone, many just desperate summer measures. There are no records of the actual number of private tubewells, admits S S Ahuja, engineering officer, MCD; but even the New Delhi Municipal Corporation owns 84 5-kilolitre behemoths (see box Drunk on water) -out of a total municipal count of over 720. Now who's going to police that?