The result obtained from stalagamites -- supplemented by past temperature records, type of vegetation, data from the oceans such as the growth rate of corals -- are used in drawing a conclusive picture of the past monsoons 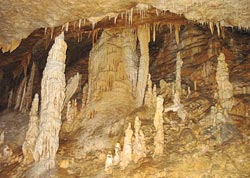 Global warming and its impacts on climate have made climatologists study climate patterns of the past so that they can reasonably predict the weather of the future. Tree-ing analysis (dendrochronology), ice-core studies and historical records, lake sediments and speleothems (cave deposits) are used the world over to understand past climatic patterns. But, compared to other techniques, the information provided by the speleothems is proving to be more reliable and precise.

Let us first understand what speleothems are and how they are formed. 'Speleothem' is a broad term that includes the stalactite, stalagamite and flowstone formed inside limestone caves. They are created when rainwater enters the cave after passing through plant debris (humus) and the carbonate bedrock (limestone) of the cave. Stalactites grow from the roof downward, while the stalagamites grow from the floor upwards. As the calcium-laden drops splash on the floor they gradually deposit the column of stalagamite. Stalactites and stalagamites often grow in pairs and sometimes grow together forming columns. The growth rate of stalagamites depends upon the amount and rate of water entering the cave, the amount of acidity and minerals in the water and the temperature and humidity conditions in the cave. Thus, during a dry spell the growth of stalagamites would be less.

The result obtained from stalagamites -- supplemented by past temperature records, type of vegetation, data from the oceans such as the growth rate of corals -- are used in drawing a conclusive picture of the past monsoons. For example, a paper published by the Geological Survey of Israel informs that the speleothems of caves in the Shomron area of Israel show that the area, that is now a desert, received heavy rainfall 16,000 years back. The stalagamites present there also show that rainfall during the glacial regime was more. The stalagamites also indicate that the last rainy season in the region was 16,000 years ago. The climate changed thereafter due to changes in the evaporation-precipitation ratio.

It is also possible to understand patterns of past tropical storms by a study of stalagamites. In Africa these studies are used in dating the Hominid fossils found in the numerous limestone caves of the continent.

The University of North California, usa, has recently taken up a project to reconstruct monsoon patterns of the last 10,000 years. The objective of the project is to establish past climates in order to help modellers and climatologists provide precise predictions. The project also includes the study of stalagamites in India, Nepal and China.

This author recently accompanied a team of scientists from the university -- Ashish Sinha and Hong-Chun Li -- to some of the limestone caves in Uttaranchal in search of stalagamites. Caves in Uttaranchal, Himachal Pradesh, Chattisgarh and Maharashtra are known for their speleothems. The project envisages collection and study of stalagamites from all these areas to draw a comprehensive picture of past monsoons. The study is significant for India because of its impact on monsoon forecasting. The picture developed by the scientists would also prove valuable for mathematical modelling of climates.