Starting off on the wrong foot

Starting off on the wrong foot 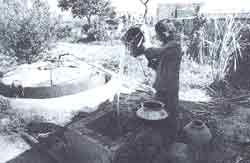 IN KEEPING with the global trend, India is trying to popularise the use of alternative energy. One attempt aims at setting up urjagrams (non-conventional energy complexes) during the Eighth Plan. However, efforts over the past decade have failed for various reasons, including the wrong selection of villages, faulty implementation, non-involvement of beneficiaries and erratic availability of funds.

The collapse of the urjagram in Brahampur village near Roorkee in Uttar Pradesh is an example of this well-intentioned plan gone wrong. Brahampur is a Harijan-dominated village of 120 households with 210 ha of tillable land. The lion's share of the land is owned by 30 families. The majority of Harijans are landless and work as daily wagers in Roorkee. There is limited electric supply in the village. For cooking, the villagers use fuelwood, dung cakes and agricultural waste.

The UP Council of Science and Technology approved the urjagram for Brahampur in 1982. But that, some villagers and officials say, was a mistake. Says Sushil Giri, an M Sc student from Brahampur, "Our village never needed the project because we used to get electricity 10 hours a day."

However, the choice was justified by the Alternate Hydro Energy Centre (AHEC) of Roorkee University, which implemented the project. Says AHEC scientist M P Sharma, "The centre carried out a socioeconomic survey and found landless Harijans who had to struggle for cooking fuels would benefit from inexpensive and pollution-free energy through a biogas plant."

Acting on the report, AHEC set up the urjagram on a four-ha plot provided by the village panchayat. With an initial budget of Rs 1.5 lakh, a biogas plant, two wind mills, a solar-operated water pump and TV and 10 solar street lamps were installed in the village. The villagers were unwilling to switch from electricity to alternative energy, but some of them cooperated in the setting up of the complex.

Things began to go wrong shortly afterwards. Says Giri, "A few households began using biogas, but within two months, the biogas supply became erratic and its users had to revert to fuelwood and dung cakes."

When the state government's non-conventional energy development agency (NEDA) took over the project in 1984, the situation deteriorated. With NEDA officials operating from the district headquarters in Hardwar, equipment maintenance was neglected and by 1990, the entire complex was in a shambles. NEDA officials blame this on lack of funds.

AHEC sources claim the villagers themselves were responsible, saying, "In 1989, we were given Rs 50,000 under the integrated rural energy programme to reactivate the complex, but the repaired systems never restarted because the villagers had stopped supplying gobar."

Gautam Singh of the village does not deny the claim. He says, "We stopped providing the gobar because first, the gas supply was unreliable and inadequate; second, food cooked on the gas had an unpleasant taste, and third, whenever we could not supply the required amount of gobar, we had to pay for the shortfall -- which was bad business."

NEDA officials bought gobar from neighbouring villages and charged each gas user -- about 12 of them -- Rs 30 a month. The officials also collected Rs 25 from each household wanting solar cookers, but never provided them.

Apparently irked at the villagers "non-cooperation", the authorities dismantled the solar street lamps and heaters. Other equipment, including the solar TV, which was popular with the entire village, were also removed.

District development project director Bhagwat Singh insists the project failed because it was set up where it was not wanted. "The project," he contends, "could have yielded better results in a non-electrified village starved of fuelwood and fodder." A senior district official quips government officials forgot that the participation of beneficiaries is essential for any development project to succeed.

Meanwhile, the run-down complex has been handed over to a Roorkee-based, government-run polytechnic, which received Rs 50,000 from the ministry of human resources to restore it.