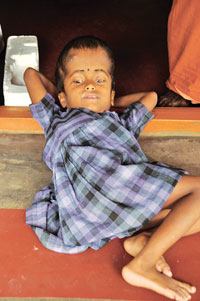 It is called the mango city. But of late, Muthalamada panchayat in Kerala’s Palakkad district has gained notoriety for excessive use of endosulfan in its mango orchards. Its effect is showing on people living there.

When seven-year-old Sharanya was born, her parents Rukmini and Chandran were relieved the baby was normal. In the eighth month of pregnancy, the doctor had warned them that fluid had entered the baby’s brain. Rukmini’s joy of having a normal baby was short-lived. Sharanya developed cerebral meningitis on the 28th day. Her head began to swell. She was diagnosed suffering from hydrocephalus—a condition caused by abnormal accumulation of cerebrospinal fluid.

Sharanya can talk, rather mumble, and can sit only with support. She is the latest suspected endosulfan victim. Her condition is similar to that of children in Kasaragod where the Plantation Corporation of Kerala aerially sprayed endosulfan on the cashew plantations for over two decades, leading to serious health problems (see ‘Children of Endosulfan’, Down To Earth, February 28, 2001).

Till last year, Sharanya’s parents were living in a mango orchard. Palakkad district has nearly 4,000 hectares (ha) of mango orchards along the Nelliampathy hills. The district health authority surveyed 9,000 house- holds in Muthalamada and Kollengode panchayats in November this year and identified 46 suspected endosulfan victims; four other children were found suffering from hydrocephalus like Sharanya.

What was more alarming was that 33 of these victims were in the 0-14 age group. The emergence of health problems coincides with intense spraying of endosulfan that started 14 years ago. The survey was prompted by protests that followed a pro-endosulfan statement made by Union minister of state for agriculture, K V Thomas (see ‘Relief for Endosulfan Victims’, Down To Earth, December 15 ). District medical officer Rose Thomas said it was a quick survey, not a scientific study.

The actual number of victims is much higher than what the district survey shows, said S Guruvayurappan, coordinator (south India) of the non-profit Wildlife Protection Society of India (WPSI). In Muthalamada alone there are at least 250 endosulfan victims, he said. Butterflies gave Guruvayurappan the first clue on the impact of pesticides.

He reported thousands of butterflies, including schedule 1 species, were dying every day in the mango orchards due to excessive use of pesticides, including endosulfan. “Muthalamada is a part of Palghat gap (pass) in the Western Ghats and a major migratory route of wildlife, including butterflies. The pesticide use in this area makes the place a graveyard for the wildlife and its ecosystem,” wrote Guruvayurappan in a letter to the forest and agriculture departments and the chief minister in 2005. “We got reports of reptile and monkey deaths and dogs, goats and cows giving birth to young ones with twisted limbs,” he said.

Why ban not effective

Endosulfan was banned in Kerala in 2005 after the Centre issued a gazette notification withholding the use of endosulfan in the state, on the basis of reports of the National Institute of Occupational Health and other committees. But that ban has been ineffective. Nearly 300 landholders of Palakkad who own big plantations in the region use endosulfan and other pesticides extensively during the flowering season to kill pests—leaf miners and leaf hoppers.

Endosulfan is easily available across the district borders in Tamil Nadu where it is not banned. The border check posts are manned by the police, excise officers and commercial tax personnel. “We neither have orders from senior officers nor the expertise to check for pesticides. Checking private vehicles and buses is restricted,” said K Narayanan, a commercial tax official at Meenakshipuram check post that borders Muthalamada. 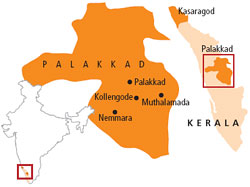 The district magistrate has initiated steps to curb entry of endosulfan through the border by forming a mobile squad which started work on December 1. The squad, headed by an assistant director of the agriculture department, has met with little success. “We conducted raids at a few pesticide depots but did not find endosulfan. The pesticide is brought in containers without labels and is sold loose. So it is difficult to find the culprits,” said Mohan Kumar, district magistrate of Palakkad.

When the Down To Earth team checked endosulfan availability in one of the agrochemical shops across the border near the Meenakshipuram check post, the shop owner removed two large containers labelled Endocin (an endosulfan brand) from the counter and stood in the way, barring entry. He refused to tell who his clients were or names of the pesticides he sold.

Residents said agents brought pesticides into Kerala and sold them to plantation workers. Endosulfan is the cheapest among them. It costs less than Rs 100 a litre; one litre is enough for an acre (0.4 ha). The spraying begins in January and is done manually by farm workers without protective gear.

“Unlike Kasaragod where helicopters were used to spray endosulfan, here the pesticide is sprayed on individual trees with nozzles directed skywards. The person spraying gets affected directly,” said C R Neelakan-dan, environmentalist in Kozhikode.

The farm labourers live within the orchards or in colonies close by. Shaktivel, a 10-year-old in Ambedkar Colony in Muthalamada, often crosses the barbed wire fence next to his house to pluck mangoes and eat them. The boy suffers from psoriasis—a non-contagious skin condition that leads to thickening of skin. The exact cause of Shaktivel’s psoriasis is not known, though genetic predisposition and environmental factors are known to trigger the condition. The boy’s mother has been diagnosed with leprosy. Shaktivel’s 13-year-old sister was diagnosed with a tumour in the back, a month ago. His father is a farm worker.

Incidence of such health problems is high but people are unaware these could be caused by endosulfan. Most labourers are from scheduled tribes such as Eravallan and Malassar. Murugeshan of Adivasi Protection Committee, a people’s forum, is now persuading labourers.

“We have asked them to look for new jobs if contractors force them to use endosulfan,” Murugeshan said. He succeeded in getting one farm worker to quit job after his contractor insisted he use endosulfan.

The pesticide is a known carcinogen, neurotoxin and genotoxin (damages DNA); the Insecticides Act of 1968 recommends restricted use of endosulfan. The Stockholm Convention, a global treaty to protect human health and environment from such chemical compounds, has declared endosulfan a persistent organic pollutant and 73 countries have banned its use. A handful of countries like India, China and Israel, however, oppose its ban (see ‘India still in endosulfan denial’, Down To Earth, November 15, 2010).

The Kerala government has been pressing the Centre to impose a country- wide ban on the pesticide. But its own track record hasn’t been impressive. Worse, the 2011 farm guide, circulated by the state agriculture ministry last month, recommended endosulfan use as a part of best practices package. “Someone was careless enough to send the old brochure for reprint; that officer has been removed,” said A Jayathilak, additional secretary for agriculture. 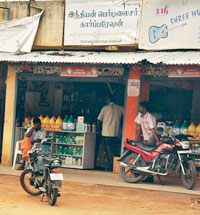 On November 19, the state pollution control board announced a ban on endosulfan under the Water (Prevention and Control of Pollution) Act of 1974 and the Air (Prevention and Control of Pollution) Act of 1981 after it found endosulfan in water and sediment samples in the Shiriya river in Kasaragod; anyone violating the ban could land in jail for up to six years and pay fine. “The latest notification shows the earlier ban was not taken seriously,” said Jayakumar of Thanal, a non-profit.

The ban was followed by an announcement by state agriculture minister M Retnakaran on December 3. He said all licences to red (extremely toxic) and yellow (highly toxic) label pesticides will be withdrawn in Kasaragod. These include endosulfan, monocrotophos, furidan and phorate.

Under its organic farming policy, Kerala wants to convert to organic farming in the next 10 years and withdrawing licences in Kasaragod is the first step. But these initiatives are not enough. “The neighbouring states of Karnataka and Tamil Nadu also need to ban the pesticides we ban. Otherwise, they will be brought in through the porous borders,” said Jayathilak.