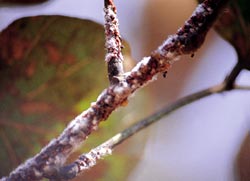 In the last week of February this year, the Election Commission office in Delhi sent an urgent request for 30 tonnes of lac for use as sealant during the coming general elections. The request sent officials in Ranchi, the capital of Jharkhand -- India's largest lac producing state -- into a frantic search. Though the required consignment was finally arranged, the message was clear: India's standing as the world's largest producer of lac was in serious danger and livelihoods of the country's three million lac cultivators in terrible jeopardy.

In Jate village about 50 kilometres from Ranchi, lac farmer Pyare Poti feels the effects of dwindling production. Rain-fed agriculture provides just four months of sustenance to her and other residents of Jate; lac farming becomes a handy supplement. "Less investment and high returns," says Poti. However, she doubts if she can bank on lac in the next few years. "In the last four years, I haven't earned anything from lac. And I don't even have the seeds to start fresh," she laments. Three years of drought combined with foggy winters have killed the lac-producing insects that visit trees in her backyard.

The scarcity has also hit big traders like Roshan Lal Sharma, who stays near Poti's village and has been running a lac-processing unit since 1950. "The situation is so bad that to keep commitments with my clients in us, I have to import lac from Thailand," he says.
Lac is a natural resin produced by the Laccifer lacca insect when it infests certain trees indigenous to India (see box: Wonder resin). It enjoyed high economic value much before tendu leaves and other forest produce attracted commercial interests. In fact, the colonial state levied a lac cess on Jharkhand's tribal cultivators. It also set up a Lac Directorate and the Indian Lac Research Institute (ilri) in Ranchi in the early twentieth century.


Between 1931-32 and 1959-60, the amount of lac produced remained steady, but there was significant decline during the next two decades. In the 1980s, production went down to 39 per cent of the average lac produced between 1930s and 1960s (see table: Lac lies low). The trend continued in the 1990s. In 2002-2003, the national production fell by 18 per cent over that of the previous year. The fall has been the steepest in Jharkhand: in 1960s it contributed around 75 per cent of the national total, this has shrunk to just 55 per cent today.
Declining production has been accompanied by loss in international markets -- a major worry because 85 per cent of Indian lac is exported. Traditionally, India enjoyed a 35-50 per cent and 23 per cent market share in lac markets in Europe and the us respectively. The Shellac Export Promotion Council (sepc) -- a Kolkata-based traders body set up by the ministry of commerce to encourage lac export -- notes that the value of lac exports increased from Rs 17 crore in 1990 to Rs 101 crore in 2002, and is expected to touch Rs 103 crore in 2003-04. But all this is caused by steep increase in the value of the dollar as compared to the rupee -- and not because of any quantum rise in exports (see table: Falling demands). In fact, worried sepc members point out that Indian lac is fast losing its competitive edge to Thailand and China. They fear that trends of last few years indicate that these countries will fast out compete Indian exports in its traditional and high value markets such as Germany, the us and the uk. "Lac is just vanishing from our economy," says K K Kumar, a senior scientist at the ilri.


More than competition and droughts, lack of a domestic policy has hit lac production the most. Despite its importance for rural livelihoods, the forest department does not have a support price for lac, leaving producers at the mercy of traders; they get about 80 per cent of the market value while the cultivators get just 10 per cent. Says Bengali Baboo, director, ilri "The traders' lobby dictates lac prices. The sepc is their body and has no concern for farmers."

Moreover, lac trade is prone to extreme price fluctuations. For instance, the average growers' price rose steeply from Rs 773 per quintal in 1991 to Rs 4,100 per quintal 1993 onwards. This encouraged lac farmers in the short run, but tribal cultivators, perpetually in need of cash, harvested the immature crop and then sold it, resulting in seed shortages for the next season.

Price fluctuations also harm exports to developed countries where manufacturers of lac-based products have to guarantee stable prices. These manufacturers react to uncertainities by replacing lac with resins that afford price stability. Consequently, lac exports have plummeted from 34,037 metric tonnes (mt) in 1952-53 to 5, 670 mt in 2000-2001 (See table: Low demand).

Earlier, price fluctuation effects were absorbed, to an extent, because developed country consumers received shellac supplies from two large factories: one in Germany and the other in the us. Today, the German factory has considerably scaled down production, while the us plant has been buying in bulk from Thailand, which supplies cheap and reliably. This buyer has acquired 95 per cent shares in seedlac purchases. Also, till the 1980s, the Indian government kept buffer lac stocks to check any demand-supply problem; this has stopped since the 1990s.


The seps plans to increase lac exports to Rs 150 crore by 2006. The council proposes to raise lac production to 30,000 mt; 10,000-12,000 mt of that would be exported. But it faces serious bottlenecks. For one, lac factories are located in hinterlands of West Bengal, Bihar, Jharkhand, Madhya Pradesh and Chhattisgarh; moving materials from here to a port and ultimately to destination ports implies freight costs amounting to approximately 15 per cent of the final selling price. The sepc sees this is a major cause for Indian lac losing competitive edge.

More importantly, hidebound forest laws keep lac-producing trees in dense forests out of bounds for lac collectors (most of them tribals without any land deeds). A conservative estimate puts untapped lac in Jharkhand's forests to around 30,000 mt -- the sepc's target for next five years for the entire country. In India about 5 million trees with potential for lac cultivation remain unused.

Opening forests to lac cultivators thus becomes necessary. Also, small landholdings of such farmers (about 50 per cent own less than one hectare (ha) while 42 per cent have one to two ha) do not encourage large-scale plantation of host trees. The ilri has developed bush-like lac plants which can prove useful to such cultivators: about 10,000 trees can be planted in one ha of land and 3,000 kilogrammes of lac worth Rs 2-3 lakh can be harvested annually.

Lac generates four million man days of employment currently. It can thus become a powerful instrument of poverty eradication. Thailand, India's main competitor has taken lac cultivation as a part of its poverty eradication programme. It has opened its rainforests to lac farmers. We will do well to emulate its example.