There is euphoria in the villages which have harvested rain. Overcoming hurdles, village communities learn the first lesson in water management 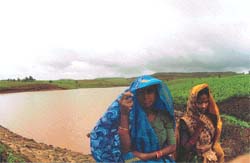 Kalakhoont village's spin out of the poverty cycle began on a rainy day in June this year. Four days of rain filled up to the brim the long-forgotten tank in this nondescript village of Jhabua district in Madhya Pradesh ( mp ). Now almost the entire village is encircled by water overflowing from the tank.

Crippled by two consecutive droughts, when an ngo , Action for Social Advancement ( asa ), offered to renovate the tank, it was hard for the residents to decide to contribute 25 per cent of the tank's renovation cost of Rs 3 lakh. Three-metres of silt, which had eroded from the surrounding hills, was removed from the tank. This was used as manure in the farmlands and the tank was soon renovated.

But the decision paid rich dividends and now promises to change the lives of the villagers forever. "There is enough water for the next three years," says an excited Nana Basna, president of the lift-irrigation society formed to regulate water use in the village. "The stored water will be enough to irrigate more than 61 hectares (ha) of land. The recharged wells will be an additional source."

The story is repeated a stone's throw away in Datod village, where a small dam built on a seasonal river, Mod, has ended years of arid misery. Though covered under the state's watershed development mission, the village found it hard to meet its irrigation needs till asa took up the task of building the dam with voluntary participation of the people. Now water is overflowing from the dam and residents plan to revive a defunct lift irrigation point.

"Immediately three villages will be irrigated, something unheard of in this drought-stricken district," exclaims the barefoot leader of the project, the Pitol block panchayat president Balusingh Bhuria.

The saga of successful people-centric efforts continued as Down To Earth chased the monsoon across three of the 11 drought-ravaged states -- mp , Gujarat and Rajasthan. What emerged was an optimistic picture of government-people efforts. And one of India's largest drought relief operations saw thousands of water harvesting structures cropping up across the country.


For the first time in India drought proofing, rather than drought management, was the focus of the state governments. And for the past two years these state governments took up water conservation activities in the hope that monsoon this year would not be wasted even if it rained below the normal level. Poverty eradication will come as a bonus, both for the state government and the people involved. The policymakers have been quick to see the benefits and now look at water as an economic instrument which can also help draw political mileage.

For the numerous communities involved, it was a decision born not out of passion, but despair and necessity. They willingly contributed to government initiatives, shelling out a share of their daily wages even in times of dire need.

In mp , people's participation was sought as the state government shook the administrative machinery into action. "We turned a calamity into an opportunity," says the state chief minister Digvijay Singh. Through the Pani Roko Abhiyan the state administration reached out to all the 52,000 villages in the state (see box: Percolation drive ). Despite the financial crunch it faced, the state diverted all funds available towards water conservation. In five months this year, from February to June, the mp government spent Rs 316 crore and the people contributed an additional Rs 99 crore.

For the Gujarat government, with 23 out of 25 districts drought-hit and the groundwater table receding alarmingly, there was no way out. The current year's drought alone had resulted in a loss of Rs 4,000 crore in agriculture and the state was desperate for a solution. In the drought of 2000, it had taken up the Sardar Patel Participatory Water Conservation Programme (sppwcp), popularly known as the 60:40 check dam scheme. The government bears 60 per cent of the cost while 40 per cent is met by the villagers.

The response was unprecedented. Government received more than 25,000 requests from the public. Ultimately, Gujarat had to raise its budget from Rs 100 crore for the 2,500 check dams planned to Rs 200 crore. By the end of 2000, 13,539 structures had been erected. "In 2001, due to the earthquake, we could make only 800 structures," says CVNadpara, civil engineer with the Narmada Water Resources Development Board. They plan to construct 6,000 more structures by the end of 2001.

With the first shower of this year's monsoon, hope was rekindled -- the hope to bring a collapsed rural economy back to life. In districts like Jhabua and Shahdol of Madhya Pradesh, water storage capacity today has increased by 100 per cent, claim government officials. Villages are already calculating the economic benefits they could derive from the stored water. Kalakhoont village in Jhabua has reached this conclusion: it will take a year to pay back the debt incurred during the two droughts.

Finally, India's rural community, a victim of myopic governance for long, is benefiting from its wisdom and resilience. For example, the residents of Padora village in mp's Shivpuri district for the first time have been able to retain three tanks of water. "It is our water. We have to save it," says a determined Aparwal Singh Rawat, chairperson of the village's watershed committee, his face beaded with raindrops mingled with sweat.

With their three tanks overflowing, residents are churning out numerous business ideas with confidence. They are ready to pool resources -- money and labour -- to take up business ventures such as poultry farms and even ambitious road-building projects. "Water has turned us into magicians and helped us bring about miraculous developments in the village," beams Rawat.


What the Down To Earth team found all along its 'water journey' was a heritage of water conservation structures that have turned into ruins. Most of them had been forgotten or built over, waiting perhaps for calamity to strike and an impetus from someone.

In Sagar district of mp , for instance, though huge tanks and water storage structures existed in the towns and villages, they were left to decay till the Pani Roko Abhiyan revived them. People also cooperated by handing over land in the disused tanks that they were using for agricultural purposes.

"It has become more of a social movement than just a water conservation movement," says B R Naidu, collector of Sagar. "The villagers worked day and night to build the tanks." Though the tanks are not yet full, plans are afoot in villages for fishery development in the ponds. These fisheries will be managed by the landless people.

Above all, what's most evident is the determination writ large on people's faces, young and old alike. " Arre sahab, hum nahin karenge to aur kaun karega (Who else will maintain the structures but us?)," asks Laxmi Narayan Pandey of Nimon village. "I may not live long, but the erected structures will stand for the next ten years," he assures.

The tribal belts of Shahdol district too are reaping direct benefits from the water conservation systems set up. Success story in one village has had a cascading effect in the neighbouring ones.

Sunderlal Patil of Datoda village feels the numerous wars India faced helped the country understand how to protect itself. Similarly, the people, under adverse conditions, have learnt to use water conservation as a weapon against drought. "The drought has taught us the value of conserving water."

Even without any official water conservation scheme to come to their aid, many villages have on their own begun taking measures to save precious water. Borkedi village of Indore is one such place, where people have deepened ponds and stream beds. And the rains have definitely brought them ample water. As a spin off, the soil from the ponds has been used to level the roads in the vicinity.


Agriculture gains the most out of water conservation. "Because of water availability, the agricultural yield will go up four times," says Bhawan Bhai, resident of Jasipadh village in Rajkot district of Gujarat, pointing to the rows of green cotton saplings in the field before him.

Remarkably, it was the village sarpanch himself, a rich diamond merchant, who contributed the entire 40 per cent share of the community in the 60:40 scheme. He now pays Rs 3,000 every month to five residents to take care of the check dams.

Strange tales abound too. The nomadic Banwar tribes in Surendranagar district of the state are returning to the Sangani village after staying away for the past two years. The dry spell kept them from returning. They also had to let their livestock go astray, they rue. "I have seen droughts. But nothing like the last two to three years," says Dahi Behn, overjoyed at the sight of water, thanks to efforts initiated by the Aga Khan Rural Support Programme, an ngo.

While Amreli district welcomed the rains with a jal puja (water ceremony), a thanksgiving for the abundant drinking water and anticipation of a bountiful harvest, the rich diamond merchants of Khopala village in Bhavnagar district have realised how precious water is -- much more than all their diamonds.

Not allowing complacency to set in with the excess bounty of water, many villagers have formed committees to regulate the use of the precious resource. In Dadgarh village of Dahod district, recovering from the ravages of the drought, the residents have formed a society to manage the water equitably from the small dams on the Kali river.

Kali is not the only river where lessons learnt have been put to use. Small dams have been constructed on at least five other rivers this year. It seems the effort has paid off.

Roofwater harvesting too has helped catch water as seen during the travels. Tankas in Gujarat were emptied to be refilled by fresh water from the rain in a matter of just three days. The womenfolk are most happy to find water so close to home.

The monsoon has once again become the harbinger of happiness.