Stranded at the station

Stranded at the station

Sonika Gupta, 29, who lives in Delhi’s Geeta Colony troubles her husband every morning to drop her to Yamuna Bank Metro Station on his motorbike; there is no bus service to the station, which is four km from her house.

An auto rickshaw ride costs her Rs 60 per trip. “I don’t understand why there is no bus service to the station,” said Gupta, accountant with a software company in Shadipur.

The nearest bus stop from Yamuna Bank is two km away at Laxmi Nagar. “The station, it seems, is meant for those who own vehicles. It is out of bounds for people like us who depend on public transport,” she added. The Yamuna Bank station is more than one km from the main road. People in the area said in the absence of buses they have only three choices: cycle rickshaw (Rs 10), auto rickshaw (Rs 20) or go on foot. “At night the stretch is deserted and unsafe to walk. We are compelled to take an auto or cycle rickshaw,” said 40-yearold Ritu Devgan.

Delhi’s Metro riders are plagued by the lack of easy transfers to other modes of transport because providing convenient interchanges were not part of the planning exercise. Reaching the Metro and making it to one’s destination after disembarking is chaotic. The Metro does not connect with buses, auto rickshaws, and cycle rickshaws. It has completely ignored pedestrians and cyclists; a person walking to a Metro station often has to jump over barricades or brave the fast-moving traffic (see diagram).

In the absence of proper integration, different modes of public transport often end up competing with one another. The Delhi Transport Corporation (DTC) has realigned some of its bus routes believing that buses should not run parallel to the Metro. Private bus operators are opting out of routes that run adjacent to the Metro. Some Metro stations are so badly planned that pedestrians find them hard to reach. Delhi’s Laxmi Nagar station requires a person to walk an additional 200 m because the right turn at the crossing near the station is closed. The pedestrian then has to take a longer route, climb a foot overbridge and then reach the station (see map, ‘Reaching Delhi’s Metro stations’). “The Metro has increased pedestrian traffic near the junction. Blocking the right turn has taken away access to the station; pedestrians now have to risk their safety,” said Sunil Kumar, a shopkeeper.

Integration has not happened because it is no one’s responsibility, said Singal. “DTC feels it is responsible only for running the buses, whereas DMRC thinks its job ends with providing a swanky Metro station. Unless there is integration, Metro will fail to make a dent in the mobility problem,” said Singal.

DMRC claims it is working towards integration. “We started a feeder system of 120 RTV vans, which was contracted out to a private player. The aim was to transport people living within a 5-10 km radius. But because of complaints we have stopped that service,” said Dayal. DMRC is now working on a fresh contract and also procuring 300 more feeder buses, he said. It has also started rent-abicycle at a few Metro stations, which has been been given on contract (see box, ‘Rent a bicycle’).

Parking lots at the Metro stations have also been given on contract. But commuters often complain that on reaching the Metro parking lot they find all the spots have been taken mostly by noncommuters.

Parking a car costs only Rs 10 for 10 hours; a two-wheelers can be parked for just Rs 5 for the whole day. “It is not possible for the contractor to differentiate between a Metro commuter and a non-commuter. But we are trying to develop smart cards to make the distinction,” said Dayal.

Santosh Kumar of Ashima Securities has a contract for parking at the Pragati Maidan Metro station, but he now wants to opt out. “I am making a loss of Rs 80,000 per month,” Kumar said. He got the parking contract in February this year for which he had to pay Rs 155,000 to DMRC and Rs 30,000 to the Municipal Corporation of Delhi (MCD) every month.

“But I am able to earn only Rs 70,000 and Rs 22,000 from DMRC and MCD parking every month,” he said. The parking fare is too low, he thinks. “It won’t make business sense unless DMRC raises the parking fee,” Kumar said.

When a Metro ride becomes more attractive than a car ride, the roads get decongested. But the Metro ride has to become attractive even after a commuter steps out of the station. “The Metro is not being integrated with the master plans of cities,” said architect and town planner Kuldip Singh. Be it Delhi, Bengaluru or Kochi, a standard formula has evolved where elevated rail tracks pass along a city’s arterial roads, often cutting through its most congested parts, he explained. “These have been conceived as standalone engineering projects with no attempt at all to fit them into the urban fabric of the city,” Singh complained.

“In a recent survey we found that more than half the Metro commuters had to walk more than 200 m to reach the station from the bus stand,” said Singal. A study conducted by Geetam Tiwari, assistant professor, Transportation Research and Injury Prevention Programme (TRIPP) at IITDelhi found people preferred the Metro only for longer distances, say over 12 km. “One does not save time if one travels 3-4 km. This is because of the additional distance one has to walk to reach the station and then wait for a train,” said Tiwari.

This clearly shows that Metro must be integrated with walking, cycling and other public transport systems, such as the Bus Rapid Transit (BRT). “Unfortunately, instead of becoming a mass transport solution, the Metro is turning out to be an industrial project,” Tiwari lamented.

Metro construction in Mumbai too lacks integrated planning. The first Metro corridor is being built along the busy main road and all the Metro stations open up on the road. “I have attended various high level meetings on transport planning, but nowhere are they talking integrated transport planning. Transport agencies are working in a compartmentalized manner,” said Bina C Balakrishnan, transport planner in Mumbai who has worked on transport projects with the Mumbai Metropolitan Region Development Authority (MMRDA). There is a flyover at Andheri because of which the Metro will pass at a ridiculous height, she added.

According to Balakrishnan, integration happens at three levels. First is the space integration, as Metro and monorail are elevated structures. Second is ticketing integration so that using one smart card a passenger can switch between various modes of transport. Third, there needs to be information integration. “Once a commuter disembarks, information on other modes of transportation from that point should be made available,” she explained. 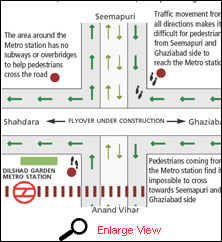 The Vishwavidyalaya Metro station at Delhi University’s north campus offers bicycles on rent. Richa Sharma (left, in pink), 22, studying at the Central Institute of Education takes the Metro from Civil Lines to Vishwavidyalaya; she then rents a bicycle and reaches her college. “Renting a bicycle costs Rs 10 for four hours; a cycle rickshaw would have cost Rs 15-20,” said Sharma.