It brings floods, droughts and the outbreak of pests that are all causing harvest failures,” and called for a complete overhaul. “Small farmers hold the key to the climate solution,” he pointed out. 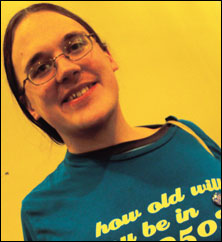 The general feeling in the forum was that Bella Centre was a big trade negotiation, where rich countries were working out ways to safeguard business interests. Naomi Klein, noted Canadian author and one of the star mobilizers at the alternative movement in Copenhagen, declared in her opening speech, “The Bella Centre is the biggest case of disaster capitalism. The deal we really need is not even on the table.”

The people’s summit saw the meeting of the North and the South. As southern activists pointed out the misery of the poor in the South, northern groups took pains to explain to the gathered youth from the North that time had come for them to give up space. And the youth movements in the North were there in full gear to tell their governments that they wanted a change in the system.

It is understandable why youth groups are prominent in the climate debate. They feel old politicians with national and self interests care little for the future and are not capable of responding to the global ecological disaster.

The largest campaign with youth participation in Copenhagen was 350.org, that is demanding that concentration of CO2 in the atmosphere be limited at 350 ppm. They have mobilized a phenomenal number of young people all over the world and have been active with awareness programmes. The group has mustered enough clout to also be present inside Bella Centre, rubbing shoulders with negotiators. Small wonder, Mohamed Nasheed, president of the Maldives came to Klimaforum in a meeting organized by 350.org to mobilize support for the demands of the small island states. The young crowd held banners proclaiming Nasheed as their global president!

It is often argued that these young groups’ demand of limiting carbon concentration to 350 ppm is an unrealistic one. On the other hand, a South Asian climate activist pointed out, “These groups are being used by rich countries to push the developing world to take up commitments.” When this probable political naivete was pointed out to Giorgio, a 22-year-old student from Italy, he confidently said, “Politics of the world has to change, maybe we are naive according to the old world’s politics. All of the politicians and officials discussing a world in 2050 will be dead by then, they have no interest in the future”. 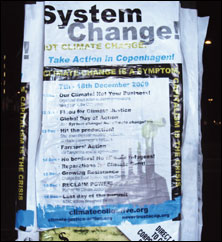 Copenhagen saw global groups with various interests come together. The grand rally of global day of action against climate change on December 12 looked like a carnival, with flags of all possible hues. Participants ranged from savvy environmental groups like Greenpeace and Friends of the Earth to established humanitarian organizations like Oxfam and Actionaid, from traditional leftwing workers’ parties to anti-green-capitalist Climate Justice Action, from Hare Krishnas to hardcore church activists. But almost all of them carried similar placards calling for change in the system. All of them called for an end to business interests and profits dominating climate solutions.

To manage the crowds, the Danish government had passed a law empowering police to arrest in anticipation, without a warrant. Two nights before the march, police detained almost 250 activists of Climate Justice Action in a central Copenhagen hostel in anticipation of violence. They claimed to have found wire-cutters from them. Despite the threat of violence and of strong police action, the march had nearly 35,000 participants. Though they were all calling for change in the system, it was not clear if they had the same route.

The difference between routes to change the system became evident two nights before the other march on December 16 organized by Climate Justice Action, probably the first global march against capitalism sparked by climate change.

At the strategy meeting in a camp set up in Copenhagen’s Christania, a ‘liberated’ area of squatters, Naomi Klein lashed out at Oxfam and other ngos for their campaign called Seal The Deal. She criticized that these groups were pushing for a deal that was inherrently bad. She took pains to explain to the gathered activists that young people in the North must give up their space so that their brothers and sisters in the South can grow.

Climate Justice Action is an international network of more that 60 organizations from both hemispheres. Tadgio Mueller, spokesperson and strategist for the network, explained why this march needed to be non-violent. He drew conclusions from the protest rallies in Seattle and Genoa and explained that violence has been keeping larger populations out of the anti capitalist movements. The objective of the rally, called Reclaim Power, was to march inside Bella Centre and tell the negotiators what the real people want. A number of officials and observers from Bella Centre were also to come out and join the rally.

Mueller got arrested the day before the rally as he came out of Bella Centre. The march on the 16th was truly a political rally, without anyone dressed as a polar bear or a panda. The march was joined by activists from the South as well. The marchers were not allowed to get into Bella Centre. Violent police action saw them getting beaten up, arrested, and neutralized by pepper spray.

The message was clear, street politics of climate change was not to be allowed. A bleeding activist said, “They are nervous, they are deciding on something inside Bella Centre against people’s will. I only spoke against carbon trade and they beat me up.”

No one can deny Copenhagen brought them all together. It will be interesting to see how these groups can mobilize more people and sustain the movement. One thing is clear: the inherent contradiction in managing climate change is out in the street.