Few studies on hypertension, but doctors say it is rising

Rapid urbanisation of rural India is steadily pushing the common man’s aspiration levels. Increase in stress and forced lifestyle changes have offered the most conducive base for the rise and rise of hypertension, say doctors and researchers.

Achieving a clear perspective on the country’s health, particularly its rural part, is difficult because very few studies have been conducted on hypertension on a national scale. 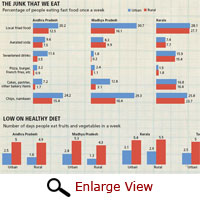 Pradeep Deshmukh, who teaches community medicine at Mahatma Gandhi Institute of Medical Sciences in Sewagram, vouches from experience that the number of hypertension cases in Wardha, Maharashtra, is rising. He has been working on the subject in the district for the past 10 years. Deshmukh’s study shows that in 2004- 2005 about 21 per cent rural adults were hypertensive in Wardha.

One of them is Dilip Kalwit, a 46- year-old orange farmer in Jamgaon village. He moved his family in June 2005 to neighbouring Amravati so that his children could get good education while he stayed back in his village to continue farming. “My daughter is doing Masters in psychology and son will complete graduation this year,” he says. Children’s education and high cost of living in a city forced Kalwit to shell out Rs 4,000 more every month. Loss of 200 orange trees since 2006 due to a fungal disease compounded his woes. His food intake also saw a downslide as he started eating at his brother’s house. His brother’s family’s diet had changed ever since his sons grew up. “The boys go to town and demand spicy and oily food which we never ate on a regular basis,” says Kalwit’s elder brother Ganesh.

Doctors diagnosed Kalwit with high blood pressure in 2005. At 53, Ganesh also suffers from hypertension. Advised to eat less oil, spices and salt, they now keep their diet to pulses and rice since the vegetables and meat prepared at home are as per the sons’ tastes—spicy. “All day I am out in the farm. But at night, alone, I get tense when I start thinking about money,” says Kalwit.

The reason for stress varies from region to region. In Kerala lack of job opportunities is taking its toll. “The state has a high number of educated youth,” says V Raman Kutty, professor at Achutha Menon Centre for Health Science Studies at Sree Chitra Tirunal Institute for Medical Sciences and Technology in Kerala. “The state has far less opportunities, leading to frustration among the youth,” he says. “Liquor, family disputes, financial burden are the other obvious causes of hypertension,” says K Sunil Naik, a senior resident of general medicine at Rajiv Gandhi Institute of Medical Sciences in Srikakulam, Andhra Pradesh.

In Srikakulam’s Jannalapadu village, 37-year-old T Suramma is finding it difficult to manage stress. Her husband is an alcoholic and she weaves clothes to take care of her three children. On a hot day in 2009, she went to the doctor with a headache and was told she had high blood pressure. Suramma has to manage Rs 400 every two weeks for drugs and tests. She has already spent Rs 10,000 on medication. Doctors fear that if not checked on time, her hypertension may soon lead to a heart disease.