An entire gamut of environmental disturbances accost most Asian cities 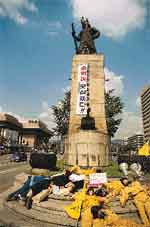 asia's race to become more industrial and economically privileged has had its fall outs. The picture is none too pretty: more population, more poverty, more air, water and noise pollution, continuing resource depletion, less ecological diversity, all plague the continent. Some areas have localised problems like the danger of rising sea levels could pose for Pacific islands.

air pollution : Rapid industrial growth has given to Asian cities this legacy of air pollution which could slowly become the singlemost disabling factor for its multitudes. According to Emerging Asia: Changes and Challenges , an Asian Development Bank ( adb ) publication, the air in Asia's cities is among the dirtiest in the world.The levels of ambient particulates - smoke particles and dust, which are a major cause of respiratory diseases - are generally twice the world average and more than five times as high as in industrial countries and Latin America. Throughout Asia, lead emissions from vehicles are also well above safe levels. Ambient levels of sulphur dioxide (SO2) - an important pollutant that traverses across national borders and contributes to acid rain, which in turn damages crops and eats away at synthetic structures - are 50 per cent higher in Asia than in either Africa or Latin America. These levels are, however, still only one-third of the levels prevalent in industrialised countries.

The Asian region has also shown a higher global energy consumption compared to the rest of the world. Whereas the global energy consumption between 1990 and 1993 fell by one per cent, in Asia, the consumption rose by 6.3 per cent. Asian reliance on coal, especially by India and China, and oil has resulted in higher carbon emissions. In fact, CO2 (carbon dioxide) emissions are growing four times as fast as the world average. With industries consuming more than 40 per cent of the energy in Bangladesh, India, China, South Korea, Malaysia, Myanmar and Vietnam, it is clear that industries must use energy efficient technologies to reduce air pollution.

Industrial pollution lets loose a wide range of pollutants which include - SOx (sulphur oxides), NOx (nitrous oxides), total suspended particulates ( tsp ), co (carbon monoxide) apart from CO2 and hydrocarbons like methane. According to a World Bank ( wb ) discussion paper by Carter Brandon and Ramesh Ramankutty, Toward an Environmental Strategy for Asia , approximately 59 per cent of particulates and 39 per cent of SO2 is emitted by industries in Beijing. In Bangkok, the industry emits about 21 per cent of tsp. Apart from these mega cities, there are a much larger number of smaller cities with even more severe air pollution problems, mainly because they were developed as industrial centres due to their proximity to raw materials and fuel sources. Shenyang and Taiyuan in China, Illigan City in the Philippines and the Singrauli region of India are prominent examples.

Such toxic releases can play havoc with the health of the people. The industrial disaster in Bhopal in 1984 is a terrifying example. Yet another threat is occupational hazards. Workers continuously exposed to a polluted environment have experienced a higher incidence of health problems ( See box : Poison in Thailand ).


The industrial sector in Asia has shown an amazing increase in output in recent years. An expanding industrial sector affects the pollution load in two basic ways. The first is to increase the total volume of pollutants in the short and medium terms. The second is to change the pollution intensity of industrial output (the amount of pollution generated per unit of output). In Asia, both the growth and the intensity effects are leading toward heavier pollution loads in the short and medium terms. As there is no comprehensive data on either pollution loads or pollution intensities, the World Bank has developed the Industrial Pollution Projection System ( ipps ) to gauge the trends in industrial pollution in Asia. The ipps uses pollution coefficients from the us manufacturing concerns for 1988 and applies them to industrial output in Asia.

As there is no data on Asia, the ipps has used coefficients developed by US economists which correlate economic growth with production of some 320 toxic pollutants. This can be used to calculate how industrial output increases pollution. However, the accuracy of this method depends upon how closely the technology used in Asia resembles that in the us in 1988. This model can, however, be looked at in two different ways. It is possible that as industries in Asia are less regulated than in usa , pollution loads could be higher. Also, considering that technology used in Asia is newer and more efficient than in usa , the result could be less pollution.

The ipps trends for Indonesia, the Philippines and Thailand are shown for the years 1975 to 1988 ( see graph: Pollution trends ). The six pollutants shown are two indicators each for water pollution (biological oxygen demand ( bod) and suspended solids), air pollution (SOx particulates) and toxic wastes (a composite index of various toxins emitted into the air or water or in solid wastes and heavy metals). Between 1975-88, these three countries had broad-based increases in pollution intensity across all forms of pollution, including 10-fold increases in Thailand, eight-fold increases in the Philippines and four-fold increases in Indonesia. However, an even more important conclusion of the ipps analysis is that the intensity, or unit volume of toxic releases per unit of output is also increasing dramatically in Asia - particularly in East Asia ( See table: Growing toxicity). In comparison, the toxic indicator in Japan fell by two-thirds between the late 1960s and 1987. The relative Gross Domestic Product ( gdp ) rates showed that it increased 2.48 times in Thailand between 1975 and 1988, 1.45 times in the Philippines and 2.16 times in Indonesia respec-tively ( Source: World Bank, World Data, 1990-95 ). This shows that depending on the nature of industrialisation, a doubling of gdp can lead to as much as 10 times increase in the pollution load.

Note:Toxicity intensity is a measure of toxicity per unit of output. The growth factors are the ratio of toxic intensities for the begining and end of the 10-year period shown, when the toxic releases are linearly weighted for degree of human toxicity

water pollution : Asia's rivers fare none the better. They are far more polluted than those in the rest of the world. According to the Global Environment Monitoring System's Water Programme under the aegis of who , Asia's rivers have four times the world average of suspended solids and 20 times the levels prevalent in oecd (Organization for Economic Cooperation and Development) countries.

Organic wastes in Asian rivers are also on the increase. More the bod , higher is the state of pollution of the lake or river. Asian rivers show a bod demand which is 1.4 times the world average, 1.5 times oecd levels and many times higher than in Latin America. Specifically, the rivers contain three times as much bacteria (faecal coliform) from human wastes than the world average and more than 10 times oecd levels. The reported median faecal coliform count in Asian rivers is 50 times higher than the who guidelines. Last of all, Asia's surface waters contain 20 times more lead than surface waters in oecd countries, mainly from industrial effluents. Only nitrate levels, which indicate the presence of human or animal waste or runoff from chemical fertilisers, are lower in Asia than in the rest of the world.

Deteriorating water quality is probably the most serious environmental problem in Asia. Polluted water is a leading cause of morbidity and mortality ,particularly among children. While untreated sewage is the most significant source of organic pollution, industrial pollution contributes a much wider range of pollutants. While most industries in Asia have pre-treatment facilities, in many cases these facilities are not operated and the wastes are simply dumped into the sewer system or available water bodies.

During the dry season, industrial waste water is an important constituent of total water flow. As total urban, industrial and agricultural demand on water resources increases, dry season shortages can cause higher concentration of pollutants. The combination of increase in industrial output and increased withdrawals of river water means that whatever dilution effects were previously observed are no longer achieved. This is particularly true in the urban areas and densely polluted river basins of China, India and Indonesia.

solid wastes and toxic pollutants : Asia's rapidly rising incomes have an unfortunate fall-out: an increase in the gene-ration of solid waste. The shift from own-grown to purchased food, the move from staple to meat-based diets and the increasing use of less biodegradable packaging mean that rising income tends to be associated with more municipal waste. On an average, a one per cent rise in income brings about a 0.34 per cent rise in municipal solid waste.

However, far more dangerous than municipal wastes are the growing quantities of hazardous and toxic wastes that hospitals, factories and households generate. China, which gene-rates 50 million tonnes of toxic wastes a year and India, which generates 40 million tonnes a year, produce much more hazardous wastes per person than South Korea or Japan. In Asia, 60 to 65 per cent of hazardous waste is put in dumpsites or landfills, 5 to 10 per cent is dumped in the ocean and the rest is incinerated or chemi-cally treated. In most cases, proper safeguards are absent or largely ineffective. High concentrations of industry in urban areas compound the problems of polluted groundwater and surface water and urban and semiurban dumps.

deforestation and land degradation : The forest cover in Asia is shrinking by one per cent a year. What is more alarming is the fact that the region as a whole has relatively less forest cover than the rest of the world. According to adb, deforestation has mainly occurred due to excessive fuelwood collection and logging; construction of infrastructure, especially roads and dams; or conversion of land to agricultural use.

Land degradation is acutely felt in Asia. It has only 0.3 ha of agricultural land per person compared to 1.6 ha in the rest of the developing world and 1.4 ha in oecdcountries. The quality of soil in Asia is also poor compared to other countries: fewer number of crops can be grown on it. Soil erosion is Asia's most widespread natural resource problem and is severe in Southeast Asia, South Asia, China and India. In India, 27 per cent of the soil suffers from severe erosion while the corresponding figure for China is 6.4 per cent.

Poor irrigation practices have resulted in salinisation and waterlogging. Some 130 million ha (mha) of Asian cropland, most of it in China, India and Pakistan, are salinised and waterlogged. Desertification has also claimed many areas in South Asia. As many as 63 mha of rainfed land and 16 mha of irrigated land have been lost to desertification.

loss of biodiversity : Asian countries with the exception of Bhutan and Malaysia, have lost between 70 and 90 per cent of their original wildlife habitats. The main reason for this debacle can be attributed to increasing human pressure. Other factors include the incapacity of government machinery to effectively manage the protected areas.

Asia's coastal and marine fisheries and mangrove and coral reef systems are among the most diverse in the world. More than 1,200 species of fish inhabit the Maldives waters alone. Though freshwater ecosystems in Southeast Asia are among the best developed in the world, more than half of Asia's wetlands have been lost. Most wetlands of international significance are at threat due to various causes that include hunting, drainage, pollution, destructive fishing practices and conversion to other uses such as human settlement.
Asia Environment Air Pollution Industry Industry Toxic Wastes Deforestation Waste Disposal Waste Disposal Cover Story Cover Story
Donate Now