Sumdwellers displaced for a cleaner Yamuna

Slums dumped out of sight

Sumdwellers displaced for a cleaner Yamuna 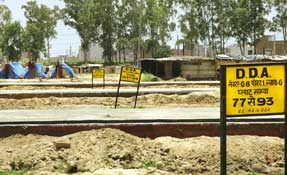 The scorching June heat does not induce even the mildest show of discomfiture from people in the resettlement colony of Bawana. Located along Delhi's northern border, the area is one of the two sites where people evicted as per the Supreme Court's directive from slums in April 2006, have been relocated.

People here have learnt that the harsh sunlight is a far more bearable proposition than the occasional half-hour rain. "The last time it rained, water rushed in through the hutments and the camp was knee-deep in water. People shifted their belongings hurriedly, deposited some of their possessions on beds or any other perch they could find, and sat with legs folded above the floating muck," says Lakhi Rama. He was relocated here from a Saraswati Vihar slum in North Delhi.

"This low-lying land has more than a foot of clay-heavy unsettled mud. When it rains, water mixes with excreta and it stays," he explains. Sitting on a bed outside a shop he has recently set up, Lakhi Rama informs us that people had to cajole, threaten and finally gherao Delhi Development Authority (dda) officers to get the muck cleared. It took three days.

Behind Lakhi Rama's shack lies a vast vacant piece of land. People like him were promised plots here, when the authorities shunted them out of slum clusters in places like Moolchand Basti and Yamuna Pushta. All basic utilities were promised to them: habitable plots, water, sanitation, roads and power. The dda committed as much to the Delhi High Court's seven-member Usha Mehra Committee dealing with illegal encroachments along the Yamuna (see box: Roots of eviction). As per dda's commitment, the utilities should have been ready for handover by March 2006, a month before the slumdwellers were evicted.

They are, however, nowhere in sight more than three months after evictions. "And the government is not even providing temporary shelter. This means another expenditure of Rs 3,000 besides the Rs 7,000 for plot allotment," alleges one slum evictee. And what about the other promises? Only non-potable water is available and that too from private water tanks. The promised sewerage is yet to materialise. Four mobile toilets which are usually without water service over 2,000 newly relocated families. Most thus prefer the outdoors.

Most of these essential supplies are in private hands and residents obviously have to pay for them. It's asking for a lot from the penurious evictees, especially when even getting to work is an expensive proposition. "I used to work in Daryaganj as a mason. Reaching there now means an expenditure of Rs 40," says one evictee from Moolchand Basti. Pratima, who was moved to Bawana from Yamuna Pushta, adds: "Most families have just one earning member now. The women have had to stop working because commuting requires money".

Girija Devi, an evictee from Moolchand Basti, clutches a bunch of papers with hope. Amongst the bunch is an affidavit stating she vacated Moolchand Basti of her own volition. "In lieu," the document mentions, "Girija is entitled to a plot." But there is no entry besides the column "plot number". And none besides the column "date", either. Don't consider these omissions for typographical errors. dda officials will fill the blanks, when they actually develop the plots. "We have to wait I guess. But right now it's tough. My children attend school in Delhi, which is quite far and that means huge expenses. I can live without water or sanitation but I can't let my children remain uneducated," she says. Girija has also heard that some have got possession of plots.

She is mistaken. They have merely got ' kabza letters' or possession letters from dda with a number of the plot they will get when it's ready.

Meanwhile, rumours are afloat that dda officials have set aside more valuable plots at the edges of Bawana. "Land sharks will corner them. These plots can fetch up to Rs 7 lakh. We have written to dda about this but have not heard from the authority," says Rajendra Paswan of the Delhi Jhuggi Jhopri Kalyan Evam Vikas Sangh -- a collective of slumdwellers. Alleges local leader Jakhir Ahmed: "Though the land allotment letters categorically prohibit sale of 'allotted' plots, around 35 per cent of the plots have been sold off in Bhawana resettlement colony."


"Why were we shifted here? They say we polluted the Yamuna. We are treated like vermin because we are poor," says Paswan. He has a point. Slumdwellers have become an alibi for the government, whenever the courts have pulled it up for not cleaning up the Yamuna.

Committees appointed by the Supreme Court (including the Baijal committee appointed in 2004 in another case) have also incriminated slums for Yamuna's pollution. But in all the litigation, no data has been presented to back the charges against slums. The Central Pollution Control Board (cpcb, which, under directives from the apex court, monitors pollution in Yamuna and the 22 drains that discharge effluents into the river) and the Delhi Jal Board (djb) seem clueless about the quantity of waste generated by slums. The judiciary, however, has taken the government's disposition at face value.


According to cpcb's monitoring report, the Yamuna received about 3,656 million litres per day (mld) waste from Delhi. How much of that can be blamed on slumdwellers? It appears a difficult question especially because we have no data on water actually supplied to the 300,000 slumdwellers of Delhi (this figure is as per a December 2000 affidavit submitted by Delhi's chief secretary to the Supreme Court). Let's make two concessions. One, assume that Delhi's authorities scrupulously adhere to the national norms of supplying 40 litres per capita daily (lpcd), through standposts, to slums. We can also assume authorities adhere to the national norm of 135 lpcd for entire urban areas. Delhi's slumdwellers would then get 12 mld of water as per the lower norm and a little more than 40 mld as per the higher norm. Experts generally concur that a community throws back 80 per cent of the water it receives as waste. So the waste generated by Delhi's slums could range from 9.6 mld to 32 mld. In other words, a mere 0.26 to 0.89 per cent of the total 3,656 mld waste generated by the city comes from slums. Of course, this is an overestimate. Most slums along the drains or the riverbank do not have assured water supply.

Also let us not forget that Delhi's slumdwellers have rarely had sewerage and sanitation facilities. Mahendra Singh, a resident of the recently demolished Bela Gaon colony, says: "How can the government claim that our excreta is reaching the river? Excreta cannot travel from land to a waterbody without being flushed. Our sewage was collected in a septic tank and then cleared by municipal tankers, once in three months."

No wonder, the biochemical oxygen demand (bod) at Nizamuddin (mid-stream), a few kilometres from Yamuna Pushta showed no improvement, even after residents were removed from there in 2004. In fact bod value deteriorated: it was 31 mg/l in April 2005 compared to 17 mg/l in April, 2003.

The river continues to flow dirty and the government continues to evict slumdwellers citing court orders. While the administration is overzealous in complying with court orders, it has missed out an important observation of the Delhi High Court. In December 2005, it noted: "We are making it clear that no sullage, sewers, industry or factory shall be permitted on both sides of the embankment of Yamuna so as to prevent pollution of the river and if any structure is found steps will be taken... to get the same removed." Six months after that order, 22 drains discharge a cocktail of treated and untreated domestic and industrial waste into the Yamuna and no one is bothered.

The government has ignored the fact that without a proper system for sewage management in resettled areas, things will only worsen. Sewage management is not on the agenda of municipal corporation of Delhi and dda. djb can always say that it's not responsible for the waste generated by the 'illegal' population. It's time the Delhi government differentiates between encroachers and polluters. It's time someone supplies the courts the obvious facts.