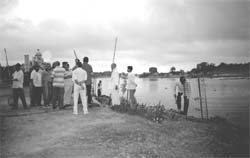 There aren't many people around in the streets of Lucknow on an early Sunday morning. But the banks of the Gomti are swarming with people. For over two years, a group of Lucknow's residents gather on Sunday to clean up the river. The group does not have a name, but as they meet every Sunday, they are known as the Sunday club.

The problems related to the river are too many and too diverse. For a city of more than 2.5 million residents there is not a single sewage treatment plant and around 25 drains empty 300 million litres of untreated sewage and wastewater into the river every day. Worse, the only sewerage farm has been closed down to make way for a new residential colony. The location of the barrage, to maintain the water level at water intake for the city is around two kilometres downstream and stops the flow of the river making it stagnant in this area. Between the intake and the barrage around 22 drains empty 250 million litres of wastewater per day. To make the matter worse, the government has set up a cattle colony just above this, and the highly contaminated water is supplied as drinking water.

The state government has failed to clean up the Gomti, after having spent nearly Rs 45 crore. The government's Rs 237.40 crore-Gomti Action Plan (gap) is a non-starter. Uttar Pradesh Jal Nigam (upjn), the main authority concerned with the action plan has sworn itself to unreasonable secrecy. They have been wasting money for preparing plans that do not work. Down To Earth made several attempts to contact R K Khanna, chief engineer of upjn, but he remained elusive. "Government always make grand plans, only to siphon off a major part of this money," says S M Akhtar, vice president, Lucknow First, a Lucknow based non-governmental organisation.
The Sunday club is doing what the government is supposed to do. It all began around two years back. Unable to stand the ever-increasing pollution in the Gomti, some of the residents got together and decided to undertake shramdan (voluntary effort) every Sunday to clean up the river. The founder members of the group include Shailja Kant Mishra, present inspector general (ig) of police Meerut range, S P Singh, mukhya nagar adhikari of Lucknow, Sulkhan Singh, deputy IG of Lucknow, Manjari Mishra, Nagendra P Singh, V P Shahi, Gyaneshwer Shukla, among many others. However high profile, the volunteers are equal on a Sunday morning. They all do the same work. "Gomti is so much polluted. We do our best to clean it," says Sulkhan Singh. "A start has been made, maybe others will follow," he adds.

They started with one of the most polluted banks of the river at Lucknow. Not to let their effort go waste they cordoned off the area, preventing further pollution and got the authorities to comply with their demands. The efforts bore fruit. The area turned to an oasis in the desert, a clean, green stretch in the middle of highly polluted Gomti bank. The clean stretch was converted into a boating club and is a popular picnic spot today.

The group does not have any kind of rules and regulations. "We do not intend to become a registered body or for that matter to take funds from anyone," says Shukla. Nobody is forced to join. They do not advertise and shy away from publicity.

Every Sunday these enthusiasts continue their work. There's fire in each one of them that makes them get up before sunrise and go out for the task. Clean up the river Gomti and Lucknow, a commitment they seem to have made to themselves.