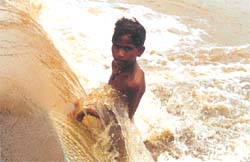 For all the people scripting the success stories, there is a warning: history has seen the death of millions of the country's water structures due to government's apathy. Now, for the first time in the last 50 years governments have really shifted their focus to drought proofing from the adhoc drought management. But these new structures created in a frenzy in the last two drought years will test whether the governments concerned will undo this historical blunder. Sustainability is the biggest challenge that this movement faces. And sustainability depends solely on who manages these structures.

It will reverse the pace of the people's water conservation movement. The 60:40 scheme was successful because the community owns the structures and the programme was implemented without centralisation. Earlier in its 'Own Your Check Dam' scheme it could build only 62 check dams despite the fact that the community was required to bear only 10 per cent of the cost. "Without the ownership, farmers might not participate in the maintenance of the structures," feels Apoorva Oza of Agha Khan Rural Support Programme (AKRSP). For example, when a check dam in Amreli suffered damages due to the earthquake people did not wait for the government to help but pumped in their money to repair it. "The check dam scheme will be sustained only when people's committees are formulated for its management," says Manu Bhai Mehta of the Savarkundla Gram Vikas Mandal, an ngo working on water conservation in Gujarat. Strangely, the government is going against its own policy of involving the community in water conservation as mooted in the state government's white paper on the water situation published recently.

The political leadership of the state has also not shown any commitment towards the movement. While the state government has now shifted all its focus to the Sardar Sarovar Project and claims to have mitigated drought using the Narmada water, the opposition parties also don't show any inclination for sustaining the movement. P K Lehere, principal secretary to the chief minister, says, "The 60:40 check dams scheme is a solution, but not a substitute. After the monsoon the tanks and wells will dry up." Amar Singh, leader of the opposition party, says, "Community-based schemes are not the solution."

For MP, which has created the largest number of structures in any state of India in the last two years in a very organised effort, also faces the biggest challenge of erecting a suitable management system. Going by the government strategy of transforming water conservation into a movement, people will be given absolute ownership of the structures. "They already belong to the community," says the chief minister (see interview).

The state government is incorporating certain structural changes for transfer of ownership. To begin with, ownership of these structures has been shifted to the gram sabhas (village assemblies), which is the supreme body now under the state's Gram Swaraj Act. The village assemblies will form the beneficiaries' groups to manage these structures. "It will not only help to institutionalise the structures but also to make water conservation a real social movement," says R Gopalakrishnan, coordinator of Rajiv Gandhi Missions, which spearheaded the Pani Roko Abhiyan.

However, going by the recent political development in the state, the Gram Swaraj Act that gives power to the village assemblies seems almost ineffective. After a massive rally of sarpanches of gram panchayats (village councils) in March 2001 opposing the handing over of power to the village assemblies, the implementation of the act has been slow. The functioning of the gram sabhas is yet to become effective. But Gopalakrishnan says, "The Pani Roko Abhiyan will help in spreading the awareness about people's rights over water."