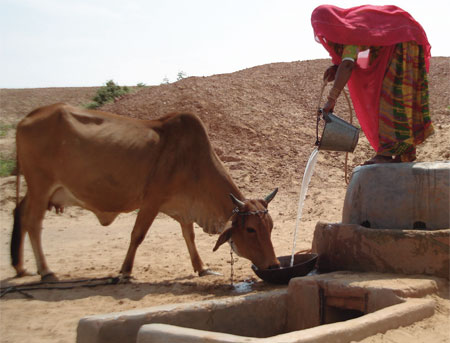 Till a few years ago, women of Bisha Bedi village in Rajasthan’s Barmer district hardly slept at night. Throbbing pain in the neck and the back kept them awake till early morning. It was caused by fetching water over long distances. “We used to wake up at four in the morning and walk a few kilometres to fetch water,” says Ajju Hukma, a frail woman, as other women nod in agreement. But that was in the past. Now most women sleep till seven, says Hukma.

Ask what gives them peaceful sleep now and the reply is beris. These are shallow wells about 30 metres deep and one metre in diameter. The village, comprising 110 households, installed 10 beris and three tankas (rainwater harvest storage structures) three years ago with the help of the non-profit, Society to Uplift Rural Economy (SURE). Each beri costs Rs 15,000 to Rs 25,000, which is two or three times less costly than a deep well. “Beris are economical and are sufficient to meet drinking water needs of people and their livestock. Sweet water here is found at shallow depths. If we dig too deep, the water will be brackish,” explains Savai Singh, the area field worker of SURE. The material costs for the beris in Bisha Bedi were borne by SURE while residents contributed labour free of cost.

Located in Bakhasar area in Chohtan block, bordering Pakistan, Bisha Bedi is in the heart of Thar desert. Rainfall in the region is less than 250 mm a year and rains don’t last more than 10 days. Droughts of varying intensity are a recurring phenomenon. Worse, groundwater quality in the region is extremely poor because of high levels of contaminants. According to the Central Ground Water Board (CGWB) data, the concentration of total dissolved solids in the area’s groundwater is 10,000 mg per litre against the maximum permissible limit of 2,000 mg/l; flouride level is 3 mg/l against the permissible limit of 1.5 mg/l and nitrate level is 745 mg/l against the limit of 100 mg/l.

Bakhasar, however, has pockets of sweet water overlying the deeper brackish aquifers. Older alluvium soil comprising sand, gravel and rock help create these pockets of filtered rainwater, which is sweet and potable. These stores of sweet water, called par, are identified by vegetation that grows overground. Beris are dug in such places.

The beris of Bisha Bedi were dug under the supervision of a water committee, formed for the purpose. Now, women’s groups and the gram panchayat look after them. “We take care of the beris like jewellery. The water in them is like butter (precious), we use it sparingly,” say the women. The installation of beris has also brought to an end quarrels with nearby villages, inform the men. “We no longer have to plead with the Rabaris (a tribe) in the neighbouring village as we have our own source now,” they say. Residents of the village were facing caste-based discrimination.

Villages of Scheduled Castes in the border areas don’t have access to basic amenities like water, sanitation, electricity and pucca houses. The 2010 Planning Commission report on the status of the Rajiv Gandhi National Drinking Water Mission in five states ranks Rajasthan the last in nearly all water sustainability parameters like quality, technical and financial aspects and community participation. SURE workers say in such a situation, reviving traditional systems of drinking water like digging beris becomes the relevant means of addressing the problem of water availability, water quality and caste-based deprivation. The block development officer of Chohtan, Bagaram Choudhary, says NGOs are complementing government work by making water available in border areas.

Women of Chandashani village, also in Bakhasar, faced the same problem as those of Bisha Bedi. They walked at least four kilometres to fetch water or dug holes in the ground and waited for groundwater to accumulate in them. The residents formed a Dalit Jagruk Samiti to solve problems like drinking water availability. The Samiti is affiliated to the Thar Nagrik Jagruk Manch (TJNM), an amalgamation of village-level bodies in Barmer.

Chandashani has about 300 households and all of them now have access to beris dug in the area. The Jagruk Samiti plans to get work on the beris included in the Mahatma Gandhi National Rural Employment Guarantee Scheme (NREGS) to access government funds and use it for water-related development works. Chaudhary says funds can be accessed under NREGS. But SURE says attempts to access funds under the scheme have not succeeded in the past because it only provides for labour wages whereas beris include other costs.

TJNM’S work is not restricted to community mobilisation, but extends to negotiating with the government authorities and advocacy. “TJNM acts as a pressure group and uses various strategies like releasing information through media, organising marches and social audits,” says Pappu Devi, a member of the food security committee in Aati village of Barmer block. While beris have improved the lives of women in the these villages, their sustainability is still a matter of concern. CGWB data indicates groundwater levels in Chohtan block is critical and it may soon be included in the over-exploited zone. TJNM will now need to focus on falling water tables and deteriorating water quality if Barmer’s sweet water reserves are to be protected.