Sugar plantations were run by African slaves who were tortured, but they also revolted against their masters 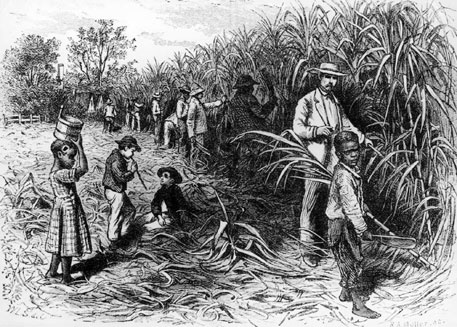 In 1493, when Christopher Columbus set sail for the New World, he took saplings of sugarcane with him. The crop flourished in the hot sunshine, heavy rainfall and fertile soil in the Caribbean island of Santa Dominga. Columbus reported to his patron, Queen Isabella of Spain, that “sugarcane grows faster in West Indies than anywhere else in the world”.

For the sugar-loving Europeans, this success was heaven-sent. For centuries, sugar was a luxury item coveted by Europeans. However, most sugar-producing areas were in the Ottaman, Persian or Mughal empires and the Arabs controlled the sugar trade making the sweetener an extreme proposition for the Europeans. Christians chaffed at paying high prices to Muslims for what they thought was an exotic spice. But as the Portuguese began exploring the Atlantic Ocean in the early 15th century, it became apparent that the offshore islands of the Madeira, Cape Verde and Canaries could support sugar cultivation. This proved a boon to the sweet-toothed Europeans who could now cultivate their own sugar without involving the “infidel” Muslims.

In 1452, the Portuguese started producing sugar in Madeira, an uninhabited island off the northwest coast of Africa. Guanches, the indigenous people of the Canary Islands, were among the first workers brought to Madeira to work at the sugar mills. But they could not withstand the tough labour demanded by the Portuguese. Many died, while others fell sick. Guanches were replaced by enslaved Africans. By 1500, Madeira had 80 sugar mills and became, for a time, the largest exporter of sugar in the world. Sugar production also spread to other Atlantic islands: the Canaries and then Santiago in the Cape Verde islands. But these islands lacked the requisite rainfall for good cane culture. So the search for lands congenial for sugarcane cultivation remained an abiding pursuit of European explorers.

The quest reached fruition when Europe discovered the Americas. Spanish colonisers snipped seeds from Columbus’ fields in the Dominican Republic and planted them throughout their burgeoning Caribbean colonies. By the mid-16th century, the Portuguese had brought some to Brazil and, soon after, the sweet cane made its way to British, Dutch and French colonies such as Barbados and Haiti.

It wasn’t long, however, before the early settlers realised that they were short of manpower. Sugar production, in order to be profitable, required large plots, between 80 to 100 hectares. Most of them were run by absentee landlords in Europe. Their successful operation required both skilled and unskilled labour, as well as a supply of industrial equipment to support the processing of crops and products for export.

Initially, indigenous American communities, mostly Arawaks and Caribs, were enslaved and made to work at the plantations. But these communities resisted and perished fighting. As entire villages of native Americans disappeared, Europeans turned to other sources of labour, even in their own countries. Plantation owners tried to forge contracts with European bond servants, people who were offered meagre land grants in return for labour on plantations. Convicts and prisoners of war—mostly Irish and Scots—were shipped by the hundreds and even thousands.

But very soon the farms were rife with unrest: the land grants rarely materialised and the European labour who knew the master’s language, shared his culture and knew his weaknesses resisted servitude. Africans became the solution to the labour problem. Slaves were brought across the Atlantic within a decade of Columbus’ voyages. The supplies were provided by traders who exploited the political instability in Africa: conflicts between kingdoms and communities in the continent meant there were always rulers ready to trade prisoners for guns.

A vicious cycle of slaves and guns developed gradually. Europeans supplied guns selectively to African states that became trading partners. The use of guns altered the patterns of rivalry among Africans and made warfare increasingly violent. Warfare meant prisoners who were traded for more guns, and eventually more slaves. Slaves were also exchanged for such imported goods as cloth and metal—prestige goods for African elites.

Rebellions on slave ships were frequent. In 1532, 109 slaves aboard the Portuguese ship, Misericordia, revolted and killed all the crew members, except the pilot and two seamen. In 1650, a slave ship sailing from Panama to Lima was wrecked off Ecuador. The captives killed the surviving Spaniards. The rebel leader, Alonso de Illescas, established himself as a lord in Esmeraldas. In 1742, the galley, Mary, was driven ashore by local people on the Gambia river. The slaves on board killed most of the crew and kept the captain prisoner for 27 days.

Utmost brutality was needed to prevent or subdue rebellion. On ships, the human cargo was chained at the wrists and legs with iron and stowed in the lower decks of the ships, like any other commodity.

Exemplary torture was common place. In 1709, the ringleader of a failed uprising on the Danish vessel, FriedericusQuartus, had one hand cut off and shown to every slave. The next day his other hand was cut off and the day after that, his head. His torso was then hoisted into the ship’s rigging. The other mutineers, after torture with thumbscrews, were whipped and had ashes, salt and pepper rubbed into their wounds. Once in the Americas, the African slaves fared better than the indigenous communities. They were often alone, separated from their family and community, unable to communicate with those around them. They offered little resistance—unlike the native Americans whose familiarity with surroundings gave them confidence to resist. At the same time, the African slave populations had come from often tropical environments, similar in many ways to the Caribbean. They were accustomed to heat and humidity and, unlike the indigenous Americans, they developed resistance to diseases of the Old World.

It was a life of endless labour for the slaves. They worked up to 18 hours a day, sometimes longer during busy periods such as harvest. There were no rest days. Most slaves were taken to the sugar plantations. In Jamaica, for example, 60 per cent worked in sugar plantations and by the early 19th century, 90 per cent of enslaved Africans in Nevis, Montserrat and Tobago toiled on sugar estates.