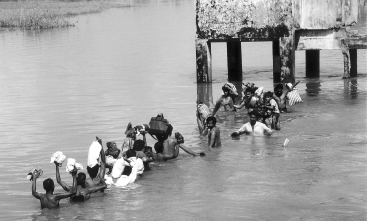 THE ghost of the 1999 super cyclone still haunts the people of Orissa. On October 18, 1999, a cyclone with a wind velocity of 200 km/hr hit the coastal district of Ganjam. It ripped through the district killing 300 people and destroying all standing crops. And while the state government was still busy estimating the economic loss, on October 29, 1999, a super cyclone wrought havoc on 14 coastal districts.

This super cyclone first hit the area between Ersama and Balikuda located in coastal Orissa. It paused for three hours in a triangle formed by Jagatsinghpur, Kendrapada and Paradeep. The cyclone then moved towards Cuttack and stopped there for two hours. Finally, it zig zagged into the sea. Usually, cyclones in Orissa last for a few hours. But the super cyclone stayed put for three days bringing the state to a standstill. On its way, it marooned one-third of the state’s area with seawater that ingressed up to 30 km in the land. Tidal waves of around four metres washed away people and property.
Around 15 million people were affected and more than 20,000 people died in the cyclone. Around 7.5 million people became homeless. Orissa lost two million tonnes of rice crop. The cyclone also devastated 17,000 sq km of agricultural land. Not just this, there was a marked impact of the cyclone on the environment. According to the state forest department, around 200,000 trees were uprooted in about 25,000 ha reserved forest. The coastal areas were the worst hit.

According to a survey of the Forest Research Institute, Dehradun, two coastal districts of Jagatsinghpur and Kendrapara faced maximum devastation as far as dense forest cover was concerned. In these two districts, the forest cover had now been reduced by 50 per cent. “There is a change in the micro climate of the region after this loss in vegetation,” says M C Das, the former chairperson of the Orissa pollution control board. Temperature data of the coastal region in the last three years shows wide fluctuations while average temperatures have gone up.

Before the rescue team could reach the cyclone-affected areas, epidemic broke out and it continued for a long time. As water could not recede for almost six months due to the region’s poor drainage system, the cycloneaffected areas reported 80,000 cases of diarrhoea within a month. Till the end of 1999, there were around 500,000 people suffering from diarrhoea and other water-borne diseases.

The super cyclone has put the state’s development clock back by two decades. Official estimates put the loss at Rs 10,000 crore. The state still implements relief and rehabilitation works in the cyclone-affected areas. According to economists, the cyclone will have an impact during the next two decades as people will spend more of their earnings on basics like home and agriculture. “This will stagnate growth and affect capital accumulation in the state. People will also lose the zest for life,” says Vaidyanath Mishra, a renowned economist and former vice chancellor of Utkal University. Little wonder then, even today psychiatric departments of hospitals in Bhubaneswar, Cuttack and Berhampur are flooded with cyclone victims. What rings alarm bells is the prediction that Orissa coast is going to become more violent. According to Artabandhu Mishra, the frequency of cyclones has increased in the Orissa coast. Quoting from a compilation of cyclones in the last four centuries, he says that from 1970s, cyclones have frequented the state and caused more damage than ever before.

Arabind Behera, managing director of the Orissa State Disaster Mitigation Authority (OSDMA), formed after the 1999 super cyclone, says, “What we lack is a scientific study of cyclones.” The UNDP team leader in Orissa, Saroj Jha says, “The lack of scientific temper in our governance is seriously affecting our calamity relief work. For example, after the 1999 cyclone, there has been no study of its environmental impact.”