Taking India for a ride

Taking India for a ride 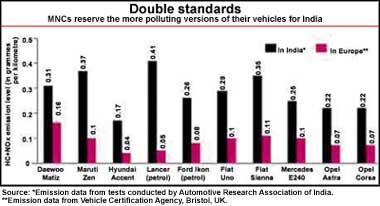 'What's good for the West is too good for India' seems to be the motto driving multinational automobile majors. Or else why would they dump Euro ii compliant cars in India, and at the same time introduce their state-of-the-art Euro iii and Euro iv versions in Europe and the us?

Sample this. As a part of the rating exercise, grp collected data from various sources on 10 passenger car models of multinational companies (mncs) being sold in India as well as the uk. Their Indian versions were found emitting 42 per cent more carbon monoxide (co) and 68.6 per cent higher hydrocarbons and nitrogen oxides (hc + nox). Worse, the mncs are unlikely to upgrade their technology till 2005, when the domestic emission norms will be upgraded.

To be sure, today's Indian carscape is incomplete without these conglomerates. They have integrated themselves with the industry and fine-tuned it. But project findings for most key parameters reveal that contrary to expectations, they are either only marginally ahead of their Indian counterparts or on a par with them, with their products conforming to the same environment standards. This, in effect, explodes the myth that mncs would emerge as the vehicle for the auto industry's overhaul.
mncs have obtained a 17.5 per cent higher score than Indian companies in corporate environment governance and pro-active initiatives, as most of them are certified as iso 14001 -- the benchmark of their green status. Even then it translates into barely 39 per cent. This is because the issues addressed by them are mostly generic and their policies similar to those formulated by their parent companies. The vital modifications for Indian conditions are missing.

For instance, some European carmakers intend promoting diesel vehicles to meet their commitment to reduce greenhouse gas emissions. This may be relevant for the West, where particulate pollution is not very high and the prices of diesel and petrol are same. But in India, the policy can have a disastrous impact on public health. Diesel vehicles emit suspended particulate matter, which is a major air pollutant in urban India. Then there is the question of ethics. Diesel is subsidised and should not be used as a fuel for passenger cars that are owned by the relatively affluent sections of society. The mncs' low score in terms of corporate environment governance can, therefore, be attributed to their failure to customise corporate plans with an India-centric focus.
Notwithstanding their high overall rating, there is hardly any difference in the scores obtained by mncs and Indian companies in environmental performance at the production plant and supply chain management. A fact corroborated by grp's green inspectors, who undertook nationwide site surveys. Domestic players have actually fared slightly better in the production phase. It has been observed that instead of showing the way by using new production technology and encouraging suppliers of components to be eco-friendly, mncs have conveniently adopted cheaper local practices. Consequently, there is a wide disparity between their plants in the West and those in India. Another example of their discriminatory approach.


Given that mncs had a head start in terms of capital, technology, reach and number of years in the industry, they were expected to emerge runaway winners. But the best they could manage was 3 leaves -- a category in which Indian companies also figured and which was well below the highest honour of 5 leaves. The global players use India as a dumping destination for obsolete technology. This may well be the reason for their average performance.

"Our company is different. We are selling the same car in India as well as Europe," contends I K Lee, director, production, Daewoo Motors India. But figures speak otherwise (see graph: Double standards ).

Some automakers feel hamstrung by local constraints. The latest Euro iii and Euro iv models of internal combustion engines cannot be launched in India because of the low-grade fuel sold in the country, they aver. Another green option -- hybrid vehicles -- known to be successful in developed markets like Japan, is unlikely to attract the Indian consumer owing to the product's exorbitant prices.

When queried on the outdated technology issue, Aditya Vij, managing director, General Motors India Limited, says, "We manufacture cars strictly in conformity with Indian norms." In his answer lies the crux of the problem: India's less stringent environmental regulations that give mnc auto giants a licence to pollute.