India's chief ministers are beginning to take note of environmental problems. But just about. The Centre for Science and Environment conducted a survey of Down To Earth readers and India's environmentalists. A report on the nature of the work carried out in different states 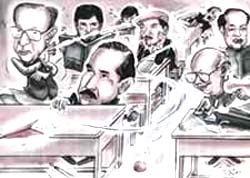 Environmental issues never really mattered in Indian realpolitik. Pollution, deforestation and land degradation have always been fringe issues - either by choice, neglect or perhaps, by ignorance of those who mattered. Neither the ruling parties nor the opposition ever put in any effort to make an issue out of the environmental status of their respective states. Politicians always felt that "India has other things to worry about". But lately, signs of change are becoming apparent. Top state politicians are beginning to discover the votes 'hidden' beneath all that green. Look at Madhya Pradesh. A chief minister (CM) of a faction-ridden parry rides back to power on the strength of his eco-friendly rural policies (See Down To Earth, Vol 7, No 15 ). Do CMs think green? Down To Earth (DTE) conducted a survey among its readers and India's environmentalists and found that they do, at least in some states.

DTE carried a readers' survey in September 1998 to rate the CMs of each state. We received 335 responses. In addition, some 1,100 letters were sent out to noted environmentalists. And after several CMs lost out in assembly elections held while DTE, was compiling the results, some 237 valid responses were left. In the environmentalists' survey, the CMs who came out with flying colours were Pawan Kumar Chamling of Sikkim and Digvijay Singh of Madhya Pradesh, in that order. However, the readers awarded Chandrababu Naidu, the Andhra Pradesh CM, the top position in the survey, pushing Digvijay Singh to the ninth position. Possibly, the "on-line" and techno-savvy CM is closer to the hearts of the English-reading middle class.

Chamling also suffered, the readers pushed him down to the lower rungs in the survey. However, environmentalists were all praise for his efforts to curtail logging and to restrict timber transport. He also won praise for pushing eco-tourism that gives employment opportunities to a lot of poor people. Maintenance of tourist spots and promotion and conservation of ethnic culture are some of the other factors which endeared him to environmentalists.

In the case of Andhra Pradesh, environmentalists were evenly divided about the issue of improvement of urban and rural environment. Some 40 per cent for and 40 per cent against. Himachal had a unique triangular pattern of voting regarding the environmental status of rural environment - 33.33 per cent felt that it was improving, and a similar percentage felt it was worsening, while 33.34 felt there was nothing worth talking about.

Rural-urban biases notwithstanding, welfare measures gave brownie points to several CMs. P S Burial and Jyoti Basu came on the third and the fourth positions in the environmentahsts' survey.

Environmentalists have acknowledged afforestation measures by Badal as well as Basu. To Basu's credit goes the successful implementation of Joint Forest Management (JFM) programmes. The success of JFM, a greening programme for Calcutta, and the implementation of a few good environmental verdicts by the "green bench" of the Calcutta high court could offset the damages done by mindless urbanisation and rampant industrial pollution in the state, environmentalists felt. In power for over two decades, Basu seems to know the pulse of the "masses". Despite his policies having choked Calcutta wetlands with urban growth, the environmentalists of Bengal forgave Basu.

Apart from afforestation moves, there are certain eco-friendly measures common to several states, as the survey results show. Everyone gave brownie points to the CMs of the respective states. Examples comprise efforts to promote Panchayati Raj (rural, local self-governance), micro-level watershed management and environmental awareness and to curb the solid waste menace, caused especially by the rampant use of plastic bags.

In the environmentalists' survey, along with Digvijay, Singh, Naidu and Nipamacha Singh of Manipur, P K Dhamal of Himachal Pradesh figured in the list of CMs showing an active interest in watershed development. Digvijay Singh obviously has a high-profile watershed project and his public relations machinery ensures a watershed of votes in return. Himachal had sunk a lot money in watershed projects. The efforts to involve local communities in their management has earned a high rating for the CM. Community forestry projects are the favourites of Naidu, Digvijay Singh, Basu, Dhumal and Nipamacha Singh. One of the first important decisions that Dhumal took after assuming power in March 1998 was to set aside Rs 10 crore from the state budget for a radically different forestry project. This community afforestation project includes micro-level planning, management and even handling of money. The Himachal Pradesh forest department is now trying to learn from the mistakes of the so-called donor-funded 'joint forest management efforts'. Earlier, people could not join these efforts dictated by the stiff forestry norms, and turned their back to them. On the contrary, Dhumal has allowed villagers to choose the kind of forest-related activities, such as water-shed, trees, drainage and access, needed in their area.

Environmentalists have lauded Nipamacha Singh for making efforts to conserve the Loktak lake, famous for its floating islets and paddy fields. Loktak is a vulnerable ecosystem of global importance and it supports the lives of rare species such as the dancing deer. Naidu has won laurels for making his 'cyber raj' reach the grassroots. He has formulated a four-year integrated plan to boost watershed management activities. He promoted water users' associations to ensure equitable distribution of irrigation water. He has to do it because Andhra Pradesh has one of the highest rates of deforestation. He has also launched the Janmabhoomi programme to involve people in the overall development process.

Community-level environmental programmes and Panchayati Raj often go hand in hand. The Madhya Pradesh government has promulgated its own progressive laws in this regard and implemented them, especially in tribal villages and hamlets. In West Bengal, JFM worked in the plains, especially benefiting the poor. But it faltered in the hills, environmentalists point out. They see it as a part of the overall neglect of the development of hill areas. The JFM efforts in Andhra Pradesh meant more points to Naidu. Dhumal, who was a leading contestant in the environmentalists' poll till the last entries came in, had a plus point here, too. He recently evolved a strategy to involve non-governmental organisations (NGOs) and people's groups in development activities right from the state level to the village level. This move has made him the darling of several NGO activists in the state.

Restriction or ban on recycled plastic bags is on the agenda of several CMs, environmentalists point out. These cheap bags proliferate, get littered all over, check grass growth, clog drains, and emit toxins when burnt. In Sikkim, Chamling has banned plastic bags in Gangtok after a series of landslides in 1997, reportedly caused by plastic-choked, rain-swollen drains. Dhumal has implemented a ban on recycled bags notified by his predecessor. While I H Patel of Karnataka has tried to restrict their use, and Bansi Lal of Haryana has banned littering of plastic bags. Goa already has an anti-littering law in place. Environmentalists, however, note that the implementation of these bans has not been very effective.
In the environmentalists' list, the tail-enders are Kalyan Singh of Uttar Pradesh, J H Patel of Karnataka and Rabri Devi of Bihar, in that order. Rabri Devi and J B Patnaik of Orissa trailed in the readers' survey as well. Environmentalists gave Kalyan Singh and Patel zero marks on three counts - personal interest in sustainable development, promotion of civil society, and public participation, especially by the poor.

What pipped Kalyan to the post was his "anti-poor" forest policies, which marginalised forest-dwelling communities. "His forest department is terrorising the people," alleges an environmentalist. Tough, anti-people forest laws, especially in the protected areas of up, have often invited media and NGO criticism. Kalyan Singh, in short, has generated a lot of controversy. E K Nayanar of Kerala figured fourth from the bottom in the environmentalist's rating because of his "I don't care" attitude towards the environment.

What contributed to Rabri Devi's lack of popularity washer opting for large-scale embankments and her giving unbridled power to bureaucrats. Those who refuse to buy the theory that Rabri Devi is a mere puppet of her husband LalooPrasad Yadav note that she is dancing to the tune of the bureaucracy. Patnaik, along with Manohar Joshi of Maharashtra, drew flak for industrialisation without adequate environmental checks. Joshi's move to promote environmentally-hostile power projects, highways in forests and housing colonies in wetlands were seen as an overall disrespect for environmental norms.

Joshi also has to bear the burden of his party, the irrepressible Shiv Sena. Environmentalists perceive Sena as an "authoritarian" one-man show that leaves no room for people's participation. Sena's stance on several environmental issues were not people-friendly, they point out. Meanwhile, Patel was criticised for his "lack of respect" for environmentalists.

It is back to book for the CMs. What is the moral of the story? It is no longer fashionable to unleash bulldozers into forests amidst the rhetoric of development and it may no longer be enough to whip up emotions to win elections either. There are people watching. And this time, most of them are thinking as well. Even the poor think. And the poor interact very closely with the environment.