Flying doctors save lives in remote areas of East Africa 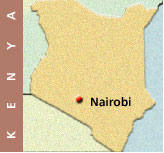 A small office in Nairobi's Wilson Airport provides succour to ailing people in the bush. The African Medical and Research Foundation's (amref's) Control Centre is where the flying doctors operate from, taking off when an emergency beckons.

The office has a row of telephones, a fax machine and a computer. In addition, its radio network is the largest in Africa with over 100 high-frequency radio stations spread across East Africa, connecting even the remotest parts of the region.

The idea of setting up a flying doctors' project was conceived in 1956 by surgeons Michael Wood from the uk, Archibald McIndoe from New Zealand and Thomas Rees from the us . They had worked in the area for a long time and had realised that the rough terrain of East Africa made access to medical care difficult for people in remote areas. Their solution was to use aeroplanes, like those used by doctors in the Australian outback.

amref owns its own fleet of aircraft, which can be converted into airborne intensive care units. The planes are equipped with machinery and supplies needed to meet most medical emergencies. A neonatal transport incubator and ventilator has been added to help airlift premature babies and sick newborns. It also has ground ambulance services. The flying doctor team is trained in emergency medicine, intensive care and anaesthesia.

To ensure better coverage, the group has partnerships to fly helicopters to areas where the flying doctors cannot reach. The service also provides opportunities to physicians from around the world to work as volunteers.

The flying doctors don't just provide emergency services. They are also a part of the community outreach programme run by amref, under which they provide specialised services, surgeries for instance, that are not available in remote areas. The group makes visits of three to five days to more than 80 remote hospitals, conducting more than 15,000 consultations and 3,000 major operations a year.

The doctors are organised under the aegis of the Flying Doctor Society, a non-profit organisation. It raises funds by enrolling members to the Flying Doctors' Society of Africa. Members, mostly tourists on safari, get one free evacuation each year, which could be an invaluable insurance. At present, there are over 32,000 members. Paid evacuations and donations also provide funds.

Kenya, Uganda and Tanzania are the main beneficiaries of the service. When clearance can be obtained, neighbouring countries like Sudan, Eritrea, Somalia, Ethiopia, Rwanda and Burundi also receive help.

There are many stories of how the flying doctors have helped poor people in remote areas when the Ethiopian raiders left villagers in north Kenya wounded. They were also enlisted in July 2005 when attacks in Marsabit district injured many people. Doctors at the district hospital couldn't cope. "I was in theatre for 12 straight hours, from the time I arrived at 3 pm. We had eight major surgeries," says John Wachira, a flying doctor. The same month, the flying doctors rescued 34-year-old Mwethya Kisangi of Kyaoni village in Kitui district. Kisangi was six months pregnant and suffered burns followig an epileptic fit. She reached the hospital the next day but needed more care. The flying doctors took her to the Kenyatta National Hospital.

Sean Culligan, part of the team, says, however, that there are major constraints. Limited financial resources, regional political unrest, bad airstrips, limited capacity of referral hospitals, lack of aeromedical and emergency medical service training is just a few of them. Nevertheless, services are provided even when a formal request has not been made. When disasters happen and evacuations are otherwise needed, refusals are extremely uncommon, Culligan adds.

There is a degree of caution in other quarters as well. "There is tremendous need of flying doctor-style interventions because the country, and the continent, has a terrain that is hard to reach. But the system needs to be evaluated in terms of its contribution towards improving the health of poorest," says Salim Sohani, director, Community Health Department, Aga Khan Health Services, Kenya.

But whatever the caveats be, this is not a flight into fantasy - it is an intervention that is saving lives in the most difficult parts of the world.