Can it not go the Orissa way? 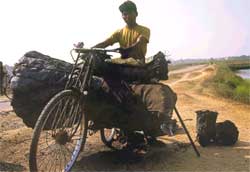 It's only on the infrastructure front that the state foresees problems in handling potential growth. "We have the minerals, but are still facing a labour migration", says I D Paswan, state mining director.

The investor-friendly approach began in January 2002 with a "goodwill meeting" in New Delhi between potential investors and ministers of Jharkhand. In the 'Bombay Road show' in September the same year, domestic and global investors expressed interest in mining activities. By the World Mining Congress in November 2004, Jharkhand was more than ready for large investment. The state government has cleared 20 mining proposals worth Rs 12, 000 crore and is considering another 22 of up to Rs 40,000 crore. The government has approved six power projects, four thermal and two hydro-power stations across Jharkhand. It's only on the infrastructure front that the state foresees problems in handling potential growth. "We have the minerals, but are still facing a labour migration", says Paswan.

For the people displaced by mining activity, the state government plans to table a rehabilitation bill in the Assembly, to take care of issues like displacement, livelihood, pollution, health, education and overall development of the affected people in the mining areas. But Xavier Dias, director, Birsa Mines and Minerals Monitoring Centre, a think-tank on mining in Ranchi, feels that the coming years will see stiff statewide resistance in favour of responsible mining and ownership rights in Jharkhand. Father Benny Ekka, Director of Xavier Institute of Social Science, Ranchi, agrees, "Mining activities should be concurrent with social accountability." Will they be?


That's the graffiti on the wall in Pachwara village, Pakur district, Jharkhand. This village of a thousand families could well be a barometer of what people think of their government's new-found love for mining projects. 45 protest movements are on in the state's 14 districts, all related to mining. Yet state government officials dismiss them as the work of 'unscrupulous elements'. But Rejan Guria of the Koel Karo Jan Sangathan feels protests are only going to grow. "We don't want the government to start new mining activity."

Pachwara has also decided to block mining. 15 boys and girls, holding traditionals bow and arrows, guard the barricaded village. Not even the district magistrate is allowed to enter. It was one of the first places to be chosen for 'development' once the new national policy on coalmine liberalisation, allowing state electricity boards of states to own captive coalmines anywhere in the country, was adopted in 2001. The Punjab State Electricity Board (pseb) formed a joint venture company, panem Coal Mines Limited, with Eastern Minerals Trading Agency to produce, supply, transport and deliver coal from the coalmines of Pachwara Central Block exclusively to pseb thermal power stations. The Central block envisages 44 years of open caste mining to extract 289 million tonnes of coal. The Jharkhand government hopes to get a royalty of Rs 100 crore per annum.

However, Pachwara Central Block encompasses more than 1100 hectares of raiyati (sharecropped land), forest, homestead and grazing land. Official estimates say 250 families will be displaced within 10-15 years and "afterwards possibly more". The land was acquired without any prior consultation with Pachwara's gram sabha, as stipulated in Panchayati Raj Extension to Scheduled Areas Act, 1996.

The panem company has belatedly offered compensation. But the villagers are not interested. The company is all set with petrol pumps, fleets of dumpers and cranes on standby. To curb protests, state authorities have slapped arrest warrants against all but two villagers. But this has not fazed villagers at all.

Says Pachwara resident Binay Hembrom, "Goons are also sent by coal mining people to create disturbance in our village." Mithun Mirdha adds, "We have to be alert and protect our women when the coal people are around."

But villagers are optimistic about keeping the company out. As the 55-year-old Cornelius Hembrom, Pragana (headman) of Pachwara says, with a twinkle in his eye, "We will win."