The Swedish experts have identified traces of over 40 substances in diesel exhaust that are listed by the epa as hazardous air pollutants and by the California Air Resources Board as toxic air contaminants. 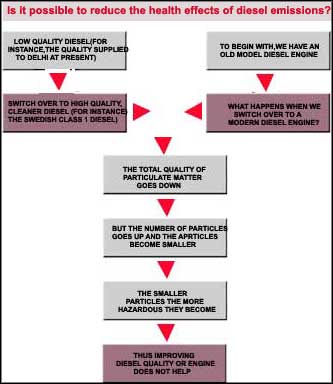 It isn't just the ministries that are misinforming the public about cng and ensuring the non-implementation of the Supreme Court order on cng. The Tata Energy Research Institute (teri), a New Delhi-based energy consultancy, has also contributed to such efforts. The teri -industry nexus is strangulating adoption of cng . Despite overwhelming evidence on how cng is far cleaner than diesel, teri has gone to town advocating diesel as the top priority. The institute's newly updated policy paper on technology and policy options for urban bus fleets actually contests the merit of the Supreme Court order on cng . In its report, teri came out in favour of a "fuel neutral approach that preserves the clean diesel option rather than compressed natural gas that is hitting Delhi."

This position finds resonance in the position of the all those who have been fighting cng from the beginning -- Union ministry of surface transport, Delhi Transport Corporation and telco , the Tata group company that has the big stakes in diesel. Affidavits filed by telco and dtc in the Supreme Court echo the teri position to continue with diesel. dtc says it can't convert its bus fleet to cng by the March 31, 2001 deadline due to insufficient supply of conversion kits and chasses. The corporation insists on purchasing diesel buses that comply with Euro i emission norms to replace its eight-year-old buses, and new Euro ii -compliant diesel buses. dtc mentions the inclusion of "various other modes of running buses on clean fuels," including low emission fuel efficient diesel engines. telco 's affidavit, too, tries to belittle the problem of particulate pollution in Delhi, claiming that this hasn't reached dangerous levels. In August 1999, a newsletter sponsored by telco tried to discredit the anti-pollution campaign (see 'Diesel update', Down To Earth , August 31, 1999).


teri has cited studies of dubious nature to claim that cng vehicles emit more ultrafine particles than diesel ones. But this could not stand to reason in a recent discussion forum on the television channel Star News. teri 's Ranjan K Bose was rendered speechless when Anil Agarwal, chairperson of the Centre for Science and Environment, exposed the true nature of the study from the Harvard Centre for Risk Assessment. Agarwal pointed out that the study was conducted for one of the leading bus and truck engine manufacturers in the us . The report is a literature survey that selectively quotes another study.

Baptised as a Harvard study, this report has found way to the table of every policymaker in Delhi. The study has no original findings of its own but is a highly biased literature survey that quotes only studies against cng . Michael Walsh, a highly respected air pollution expert and former official of the us Environment Protection Agency (epa), says, "What I find especially troubling and distasteful is the way the authors give the report the aura of impartiality and scholarship by associating it with the Harvard name. Any undergraduate who turned such a report in to his professor would surely get a very poor grade."

teri chooses to ignore the mounting evidence on the cancer causing potential of diesel emissions that is many times more potent than cng emissions. A study by the Swedish consultancy group Ecotraffic found that after taking into account all the toxic components in emissions, the cancer potency level of diesel cars is double that of petrol cars in India. Even more frightening is the fact that if only particulate emissions are compared from different car models then the cancerous effect of diesel particulate matter from the new diesel car is equal to that of 24 new petrol cars and 81 cng cars on the road. The Swedish experts have identified traces of over 40 substances in diesel exhaust that are listed by the epa as hazardous air pollutants and by the California Air Resources Board as toxic air contaminants. Unfortunately, the pro-diesel lobby glibly vouches for diesel without considering how even clean diesel is not good enough to reduce the risk of cancer.

When confronted by similar myths being propagated by diesel industry in the us , the us department of energy issued public notification to dispel these myths. It categorically dismissed the argument that cng buses emit more particulate matter or more ultrafine particles than diesel buses: " cng buses consistently emit dramatically less particulate matter than diesel buses. The trace amount of particulate matter associa ted with cng is attributed to crankcase lubri cating oil consumption (which also occurs in diesel engines)" (see graph: Particle toxicity ). As regards the number of ultrafine particles, it says, " cng actually produces much fewer ultrafine particles than diesel fuel." On the point that cng buses cause more global warming, it says, " cng buses have very similar greenhouse gas emissions as diesel buses despite higher methane emissions because natural gas has inherently lower carbon dioxide emissions compared to diesel." However, an issue paper by the European Natural Gas Association points out that "a majority of references conclude that natural gas is most preferable from a global warming point of view (see box: Misleading media and public opinion).

teri argues in favour of what it claims are the most cost-effective options for cutting emissions, referring to diesel technologies. In this the institute actually finds support from Ashoke Joshi, secretary to the Union ministry of surface transport, who expressed similar sentiments in a letter dated February 22, 2000, to the Environment Pollution (Prevention and Control) Authority. This was barely one month before the deadline to convert all eight-year-old buses to cng . The December 11, 2000 issue of Diesel Fuel News , a pro-diesel newsletter, quotes teri to say that cng technology is not viable for "a poor country like India." So, according to teri , while people are dying due to air pollution, they should wait for the dawn of a cheaper technology. teri not only ignores the health costs of diesel emissions, it also contradicts international experiences of the economic advantages of cng . In another paper dealing with vehicular pollution control strategies, teri champions the cause of promoting alternative fuels like cng . This confused approach shows through.

teri ignores a study by the National Institute of Public Finance and Policy that says cng is the most cost-effective option, better than using particulate traps in current diesel buses or bringing advanced diesel buses that would need far cleaner diesel than is available today. The study estimates that the cost (per weighted tonne) of emission reduction with particulate trap 60 times higher than the cost of cng retrofitment.