Many groups across the country are working to educate the people on the importance of the laws that govern people's rights to natural resources. 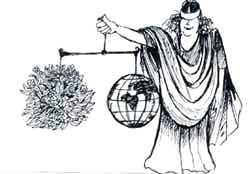 IN THE battle to save the environment, the nature of laws that govern people's rights to natural resources are crucial, as is the poor person's knowledge of these laws. Certain organisations are working towards reforming existing anomalies in the law and helping people become more aware of their legal rights.

The Indian Law Institute (ILI), an autonomous legal research and education body, has been studying laws relating to different natural resources since 1984. Rather than merely carrying out a "biopsy" of the concerned laws, the researchers have studied the laws from the point of view of social and developmental concerns. Laws relating to forests, wastelands, energy use, conservation and, more recently, water have been documented and analysed and suggestions on reforms or new laws have been proposed. The institute also plans to start a post-graduate course on natural resource laws.

While ILI's legal research has been directed at legal experts and law-makers, the Multiple Action Research Group (MARG) has been promoting legal literacy among laypersons, especially the poor and disadvantaged in rural areas. It acts as a support group and provides socio-legal information to grassroot groups. It has prepared easy-to-read manuals on the Land Acquisition Act, 1894, and other laws affecting the poor and produced a film on displacement and rehabilitation. MARG also runs a legal aid cell and supports various campaigns on legal issues.

There are groups of lawyers also who are involved both in the practice and theoretical dimensions of law. Gayatri Singh, Colin Gonsalves and Mihir Desai of Bombay have taken up cases relating to environmental, labour and human rights issues. This group brought out The Environmental Activists' Handbook, published by the Asha Kendra Documentation Centre some years ago. The group is now working on updating the handbook. They also plan to hold a workshop on Environment and the Law in May 1993 at the Indian Social Institute in Bangalore.

The Indian Council for Enviro-Legal Action was set up in 1989 to promote environmental activism at the law-making level. Retired chief justice P N Bhagwati and Supreme Court lawyer M C Mehta, the latter with more than 25 favourable judgements from the Supreme Court in environmental cases to his credit, are associated with this organisation. In 1990, the council mooted legislation for environmental courts. Recently, it spearheaded a campaign to highlight the shortcomings in the proposed Environment Tribunal Bill, 1992.

Besides these organisations, other groups are producing publications with a view to promoting legal literacy among the public. The legal cell at the Indian Social Institute brings out Legal News and Views, The Lawyers' Collective brings out a monthly journal of the same name and Legal Resources for Social Action publishes Legal Perspectives. The Indian Social Institute also holds annual programmes to train para-legal workers.