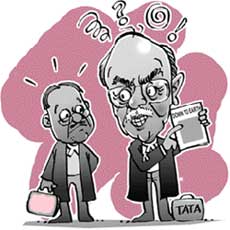 There are only two bus manufacturers in the country -- Telco and Ashok Leyland. Between the two of them they will share the large cng bus market of Delhi and elsewhere. While Ashok Leyland looks at it as a business opportunity and is supportive of cng , Telco would prefer to scuttle it. Thanks to cng , Ashok Leyland has made a big foray into the bus market in Delhi, the traditional market of Telco.

Telco's preference for diesel is so deep that even in the last court hearing of August 17, 2001, when the attention of the court was entirely focused on implementation of the cng order, Telco filed yet another affidavit to push for Euro II diesel buses and contest the epca 's clean fuels report. Telco has asked for a reassessment of the epca recommendations on the basis that one of its members, Anil Agarwal, also the Centre for Science and Environment (cse) chairperson, is biased. The bulky affidavit has several articles from Down To Earth and various publications by Agarwal attached. Telco argues, "there is a real danger that Mr Anil Agarwal at the time of participating in the deliberations, preparing and signing of the Report on Clean Fuels dated July, 2001, was or could have been influenced by an unconscious but settled prejudice against diesel." It further adds, "The tone of his articles and trenchancy with which he expresses his views which are so firmly held that it would not be possible for him to make the Report with an open mind." As the epca report was a unanimous one, Telco, therefore, implies that all the other four members are people with a very nimble mind and Agarwal can just wave a magic wand on them.

The Telco affidavit is a direct assault against the epca and is vitriolic against Agarwal. Raising doubts in fact is a typical combat strategy of Fali S Nariman, Telco's eminent counsel. Nariman has tried doing this twice before. First time he attacked Jagdish Khattar, managing director, Maruti Udyog Ltd, also a member of the epca , representing the auto industry. In the hearing of April 29, 1999, when the Supreme Court was discussing restricting diesel cars in Delhi, Nariman had said with great drama, "My lords, if diesel is polluting so is petrol. Both should be restricted." He insinuated that the epca report was against diesel because Khattar is a "petrol man". Maruti indeed produces mostly petrol vehicles. Khattar was so hurt that he wanted to resign from the epca but its other members had to persuade him not to.

The second time came when cse lawyer asked for the admission of its affidavit seeking a comprehensive action plan to control particulate pollution in Delhi, Telco opposed its admission. In its own affidavit of January 2000 pleading against the admission of cse 's affidavit, Telco had again accused Agarwal of being a biased member. "He (Agarwal) has disqualified himself by his own acts and conduct from participating in the deliberations of the statutory committee and signing its reports." Telco clearly does not like a 'brazen' member of the civil society participating in a government committee who publicly discusses the challenges the country faces in controlling air pollution. One would have thought this would be welcomed as 'transparency' and thus open to public challenge and debate. But, clearly, Telco appears to prefer faceless bureaucrats who only operate behind the scenes.

Its interesting that so far Nariman's own conflict of interest has not been much talked about. From the time that the epca recommended a restriction on plying of private diesel-driven vehicles in Delhi in 1999 to the time the three-judge bench took stock of the order on converting diesel buses to cng on August 17, 2001, Nariman has persistently argued in favour of diesel. But Nariman is also a Rajya Sabha member where he is expected to pursue public interest. During the Rajya Sabha discussions in August 2001 over the cng mess in Delhi, he failed to make the house appreciate the cng initiative of the Supreme Court or project the public health concerns raised by various people over diesel. On the contrary, when asked by the deputy chairperson if the minister can appeal for low sulphur diesel to the court, he promptly gave a supportive affirmation saying, "I think he should."

Every effort by cse to meet him as a Member of Parliament (mp) failed.