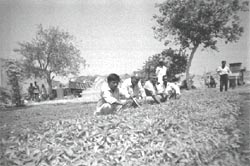 During the 1999-2000 drought, Down To Earth ( dte ) reported that five villages in Gujarat and Madhya Pradesh had enough water during the drought because of the water conservation activities they had undertaken. dte revisited these villages, reeling under the second successive drought. Unlike last year, some of these villages are facing water scarcity and people have had to migrate to earn their livelihood. However, judicious water management planning has left these villages in a slightly more comfortable situation than villages where no such work was undertaken -- drinking water is available, although crops have failed due to lack of water.

"In a recent survey I found that in the second consecutive year of drought, watershed villages have done more community planning for using the available water than in non-watershed villages," says Kuldeep Sagar of Development Support Centre ( dsc ), an Ahmedabad-based ngo involved in watershed projects. A study by dsc shows that villages with watershed development programmes managed the 2000 drought better than those without such programmes. Anil C Shah, chairperson of dsc , says, "Villages with a few years of soil and moisture conservation activities are way ahead of other villages as far as fodder and drinking water supply is concerned." dsc 's survey shows that to realise higher gains of the potential created requires several measures by way of extension and linkages to resources of knowledge, credit, marketing. This is known as "watershed plus", which may be undertaken either parallel to watershed development or sequenced later.

The availability of water in villages with water conservation measures is directly proportional to the number of years put into water conservation and the presence of village level institutions to manage the resources and distribute them equitably. For example, Raj-Samadhiyala village took up water conservation in the late 1970s. The village harvested two crops and some farmers took a third crop as well. In the neighbouring village Kasturbadham, the water table has done down drastically and 60 per cent of its residents have migrated. Gelhar Choti in Jhabua took to water conservation four years ago. It fought the last drought well, but the current drought has shaken the community. The village-level institutions formed to monitor watershed activities have collapsed with migration of residents.


Villages all over Gujarat are demanding water tankers from the government. Raj-Samadhiyala, however, has resolved to not accept government water. "Water must come from the people," says Hardevsinh Balwantsinh Jadeja, head of the village council for the past 22 years who scripted the village's transformation. This is probably the only village in the Saurashtra region that has harvested up to three crops, although it rained only 100 mm, against the average of 500 mm. The monsoon crop was 100 per cent and the winter harvest was 50 per cent. About 10 per cent of the residents have gone in for summer crops. The third crop of vegetables has earned some people more than the price of their land as vegetables are very costly.
From a village adopted under desert development programme to the present state was a journey that began with the severe drought of 1986, when the village took up watershed development -- 15 years and 45 check dams later, the village is an example of integrated village development. This year as there is no surface water, but 30 of the village's 280 wells have water. The village has a strict water management plan this year to ensure water availability till the monsoon. Strong village institutions have made this possible. Village councils in all Gujarat villages have been suspended in view of the forthcoming elections to the local bodies, leading to chaos in drought relief. A village development committee ( vdc ), formed by the community, manages Raj-Samadhiyala. The committee has 13 members -- each member representing a cluster of 25 families. It monitors the village council. "It is the most powerful body in the village and exists beyond government control," says Jadeja.

In the absence of any statutory elected body at the village, the committee has taken over drought management. The vdc had chalked out a plan in 2000 to weather the drought after organising a village assembly. Its decision to not lift water from any surface water reservoir has helped recharge groundwater. Residents can lift water only from their wells. "We had enough water stored beneath the surface. The monsoon showers added to it." This year, the wells that have water cater to all the farmers equitably. "To manage the crisis we have turned our private property into community resource," says Babu Moti, a elderly resident. Cash crops have been partially banned to minimise water use -- the key lies in using the scarce resource judiciously, Jadeja notes. The village can manage the kharif (monsoon) crop even if the monsoon fails again.

The village is not sitting idle on its past achievements. Its catchment area is very small: 1.5 sq km. The vdc has procured satellite images of the village's topography. These show underground cracks running 35-50 metres under the surface, formed by earthquakes thousands years ago. The village is excavating these cracks and directing rainwater to them. "It costs less than a check dam but stores thrice as much water," says Jadeja. While digging such a crack, the water table was quite high: 12 metres under the surface.


This village in Dahod district of Gujarat is battling third successive year of drought. It rained only 240 mm this year, as against an average of 840 mm. Nine years ago, Mahudi began building a series of small dams on the seasonal river Machhan. Last year, the village reaped a normal harvest. This year, it has taken up drought mitigation measure.

In July 2000, it became clear that another drought loomed large. In a village assembly, all water-intensive crops were banned and priority was shifted to ensure drinking water. The lift irrigation cooperative society, which manages the dams on the river, was put in charge of monitoring water use. "Water availability is less than 20 per cent of the normal storage in the village. So, the immediate concern is to save water for drinking and to take up the minimum crops to sustain ourselves," says Hartabhai Devbhai Katara, a resident. Maize was cultivated nevertheless, as it provides fodder for the livestock.

The Down To Earth reporter who visited the village in the last week of April 2001 noted that the village has not reported any migration as it took the kharif (monsoon) crop and reaped a partial rabi (winter) crop. In early summer, after taking stock of the water available and the intensity of drought, the society allowed the cultivation of vegetable. This helped in checking migration. However, 200 of the village's 400 residents work in a relief camp nearby.


In 1993, this village in Gujarat's Saurashtra region began recharging its 150-odd wells that had gone dry by directing rainwater into them. Till 1998, they reaped good harvests due to this investment. Then began their tryst with drought. In the past two years, the village managed on the strength of the good harvest of the past. This year is different. The people had a choice: they could either migrate or use the last of their remaining resources. Saudas Senjelia, who mobilised the village to recharging wells, says that the village can't depend on the recharged wells beyond this year. The 2000 monsoon rained 60 per cent below normal. By the end of April 2001, only 10 wells had water. The monsoon crop was harvested in at least 60 percent of the cropped land, irrigated with water from recharged wells. But the winter crop was more limited.

Residents say the good harvest was due to the normal monsoons of 1993-98. "During this period, grain stocks in the village went up and average income doubled. The surplus created has helped them sail smoothly through the worst drought," says Shamji Antala of Lok Manch, an ngo credited with recharging of 700,000 wells in Saurashtra.
The village suffers from the absence of a community institution to manage its water, particularly when it is facing a crisis. Recharging of wells spread in this village as private efforts of individuals. "It anyway doesn't lead to abuse or misuse of the resources created as farmers have adopted different methods to plan use of available water in their wells," says Antala. For example, all the 10 well owners with water didn't take up the winter crop, opting for fodder crops. Although there is very little water in the village this year, the residents don't beg the government for water tankers -- they pay for their tankers. "This is an indicator of the village's prosperity," says Antala.


After taking up measures under the Madhya Pradesh government's Rajiv Gandhi Watershed Development Mission, this village sailed through the 2000 drought. The watershed mission has withdrawn from this village, handing over management to the watershed committee. "Rise in water table after watershed activities was enough for one year. This year, however, we don't have water and fodder after the monsoon failed," says Ditiya Singh, president of the village watershed committee. Six of the eight handpumps that had water last year have completely dried up this year. "It is a mad rush every morning for a bucket of water," says Pan Singh, a resident. The remaining two handpumps yield a little water once every 14 hours. After both the monsoon and the winter crops failed, two-thirds of the village's total population has migrated.

Residents feel that the situation would have been better if the government had continued its watershed programme for some more years. "In last three years, the village had noticed an improvement in agriculture after water became available. Besides government jobs kept people in the village during the lean period," says Singh.

In October 1999, the state government stopped its watershed activities due to lack of funds. As employment opportunities came down -- that, too, in a drought year -- people started migrating. This led to the collapse of the village-level institutions created under the watershed mission. "The timeframe of four years is very limited as it takes at least two years to mobilise people for the programme. In just two years it is difficult to show results," says R K Gupta, additional chief executive officer of the district council.

For a village that tripled its irrigation potential in just three years, two consecutive years of drought have reversed the wheel. "We shouldn't withdraw from villages that have just finished four years under the watershed development programme. But, given the guidelines and the target set up, we have to move out to other places," says Gupta.